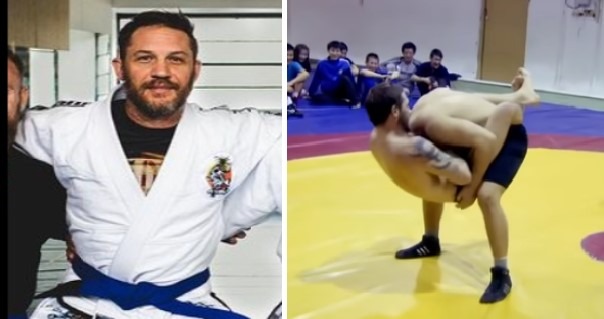 Some time ago 41-year-old Tom Hardy and former F1 Ferrari driver Mika Salo went on the toughest road trip imaginable. They went to eastern Siberia where winter temperatures plummet towards an inconceivable -70.

After 5 hours of driving through Siberia, they found the “institute of physical training”. The place where two Olympic gold medalists have been produced. Tom and his team were invited to take part in the training session to see how it is still possible to have fun in a harsh environment. The philosophy of this place is that physical activity is the route to happiness for everyone and it’s something a lot of us would agree with.

In the video below we can see Tom Hardy grappling with Russians in this form of ancient wrestling called Cap Sergei, the word for fragile. The idea behind this form of wrestling is to force any part of your opponent’s body to the ground.

After three serious rounds with a local wrestler, Tom Hardy said: “I’m done, he’s joking with me. He went really really easy on me. If you look at the territory and the terrain they live in you think about the strength and the patience that it takes to survive the place like this, it’s brilliant “.