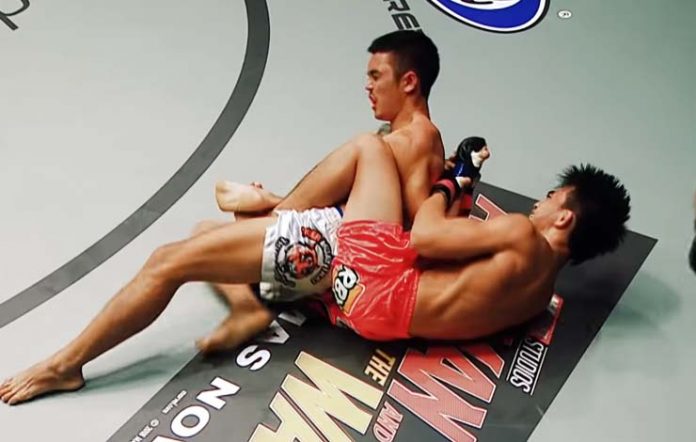 Almost any 90s movie that has cops arresting people, aside from NFL-like flying tackles, shows that perpetrators surrender immediately when their arm gets twisted behind their back. The idea for this move comes out of wrestling. Chicken wings are staples of wrestling when it comes to controlling someone and forcing them into a position that lands you points. They have been looked down upon by other martial arts, though, and that’s mostly because all of the Hollywood nonsense we see in movies. Is there a viable BJJ chicken wing option, though, or is it a move that only wrestlers can use?

If there’s one thing I’ve figured out in Jiu-Jitsu, is that you can learn something from every grappling move in existence. It doesn’t have to be the same thing as in the original sport, mind you. Everything is open for adjustments and evolution. Just take a look at leg locks. A decade ago they were outlawed and thought to be ineffective until Danaher came out with a revised and evolved version of them. It is the same with any move, including BJJ chicken wing options. In fact, chicken wings offer a lot to BJJ, where not just control, but submission is a big part of the game.

In wrestling, a chicken wing is a move that manipulates the opponent’s arm so that you gain control over them. Most often, wrestlers rely upon chicken wings to tire out an opponent, help get a pin, earn points, or finish a takedown from a scramble. AS you can see, the move is very versatile and has plenty of uses. In fact, it also acts as a submission, so much so that setting it up as one is illegal in wrestling, due to the move being “dangerous”.

A chicken wing in wrestling is when you take the arm of an opponent and force their elbow backward so that you can thread your own arm towards their back. There are plenty of ways to set it up and you can use either arm to control the position. Having a hand behind in that manner incapacitates your opponent taking away a lot of movement options. Furthermore, there are double arm chicken wings that provide total control over the upper body. In terms of legality, the arm that you thread must not go towards the shoulder or the traps in wrestling because then it turns into a submission hold. In terms of BJJ chicken wing options, that’s exactly what we’re after.

The reason why a chicken wing is so efficient is that it utilizes a basic and very important grappling principle – the open elbow. A chicken wing position allows you to take the opponent’s elbow away from their ribcage, which is where they’re the strongest. This will weaken any opponent, allowing you o o further improve on the positioning or finish with a submission hold.

The chicken wing in wrestling is usually done when an opponent has their belly to the ground. IN wrestling, if both shoulder blades touch the ground, you get a pin and win the match. That is why wrestlers go belly down whenever they sense danger lurking. Chicken wings allow the top person to easily maneuver a bottom person to their back, due to the open elbow principle.

The double chicken wing works even better. You get both arms, achieving total control over the body. Then you can maneuver in different ways to get the opponent’s back to the ground. In BJJ terms, that would mean either securing side control or even transitioning into more dominant positions like the Truck or back mount.

Speaking of back control, that’s another position where chicken wings have a role to play,. Of course, now we’re going into BJJ chicken wing territory rather than the original wrestling ones. The idea is to eliminate the arm, similarly to Danaher’s straight jacket control, so that you can get to a choke easier. The goal is to place the top arm of an opponent behind their back, trapping it with your body and your leg when you have their back.

Another huge use of the BJJ chicken wing concept is from top side control. It is done with the GI and is one of the most uncomfortable positions you can put someone in. The direction of the chicken wing is different, with the arm trapped in an Americana-like position, but the principle is the same. The goal is to get the opponent’s own lapel over their wrist and grab the lapel with the cross-face arm, as tightly as possible. There are different finishes available, or just i9mmense control, depending on what you need at the moment.

On the subject of BJJ chicken wing submissions, as you might imagine, the opportunities are plentiful. As a submission, the chicken wing is practically a Kimura lock. However, the wrestling setups give it a different dimension, and combining it with BJJ principles makes for some really painful and uncomfortable submissions.

There is a simple and painful BJJ chicken wing submission you can do from the closed guard. It involves you maneuvering the opponent’s arm with an arm drag so that you trap the wrist with your legs and your arm is inside like for a regular chicken wing. It looks like a modified biceps slicer but is actually a nasty shoulder lock.

Wrist locks are clearly another really available option when you’re messing around with chicken wings. Also form the guard, when you get a chicken wing position of the arm, and you can’t maneuver into the shoulder lock, you can transfer your attention to the wrist. As long as the elbow is pointing away from the opponent’s body, you’ll be able to tap them. Use the arm that is inside the chicken wing to bend the wrist, and the other arm to fix their forearm to your body.

Finally, a BJJ Chicken wing Ezekiel choke to provide some variety. The Ezekiel choke from her works when an opponent manages to wiggle their arm free from the side control lapel chicken wing. What you’re left with is a loop from the GI that can act as your bottom hand would in a regular Ezekiel choke. All you need to do is thread the choking arm in and finish.

The BJJ Chicken wing is not something that is going to take the grappling world by storm. It is one of those moves that will help you out of tight spots or help you finish people you normally can’t. It is far from a silver bullet solution to Jiu-Jitsu issues, but it is very helpful, annoying, and painful, which is usually the recipe for highly effective BJJ moves. All you need to do is start having fun with it.