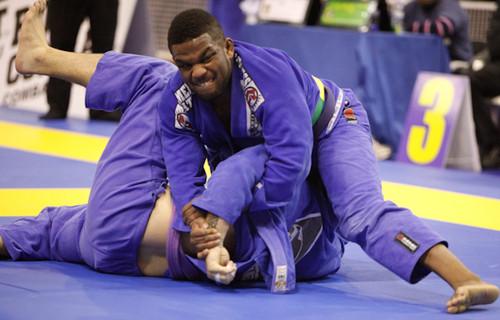 There are some moves in BJJ that easily withstand the test of time. Some techniques are always popular and transcend the boundaries of Gi and No-Gi Jiu-Jitsu. No matter how much they’re practiced, these moves stay highly efficient in every aspect of competition. The Rear Naked Choke is one such example of a high percentage move that’s useful to every grappler. Another is the armbar, a highly reliable move that many Judokas and BJJ players still favor to this day. But there’s one move, that is as old as BJJ itself and originally proved its effectiveness against the founder himself. We’re talking, of course, about the Kimura lock.

The Kimura lock is a shoulder lock submission, mostly specific to BJJ. It is a move that never went out of fashion, sort to speak. It’s always been a high percentage move that’s effective across all belt levels and categories. Even some of the most fearsome BJJ fighters, like Minotauro, and even Heli Gracie himself have suffered defeat due to the Kimura. It is a very powerful submission available from virtually every BJJ position we know. Time to brush up on your knowledge of a move you’ve most likely been taught during your first month of Jiu-Jitsu.

The Kimura lock bears the name of a formidable Judoka that reigned terror among grappling martial arts competitors. Masahiko Kimura was a Japanese Judoka and pro-wrestler who is considered to be one of the greatest of all times.

Masahiko Kimura got a Judo black belt at 15 years of age and was the youngest ever 5th-degree black belt at the age of 18. He was a very feared Judoka who, reportedly, only lost 4 matches in his entire career. His brutal training regimen included daily practices of a thousand pushups and 9-hour long training sessions. Kimura was promoted to a 7th-degree Judo black belt at the age of 30. His favorite move was, as you might guess, the reverse Ude Garami, or Kimura lock.

Kimura is one of the pioneers of Vale Tudo fighting. The pro-wrestler faced and beat many high-level opponents during his prime. In 1951, while visiting Brazil, the famous Judoka responded to a challenge from the founder of BJJ, Helio Gracie. They fought in a “submission-only format” that included the opportunity to win by submission or knockout. Pretty similar to today’s Combat Jiu-Jitsu, in essence. Helio and Kimura squared off in the famous Maracana stadium, in front of 20.000 people. Kimura threw the much lighter Helio around for a while before pinning him to the ground. After multiple submission attempts, he was finally successful with a reverse Ude Garami, that broke Helio’s arm. As the owner of his formidable opponent, Helio later named the move the Kimura lock, after incorporating it into BJJ.

Learn more about Helio Gracie and his brother Carlos: 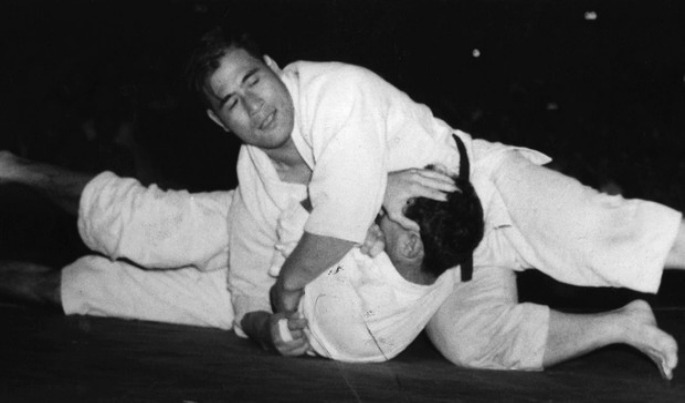 The Kimura lock, or double wrist lock, as it is known in wrestling, is primarily a shoulder lock. It is done with two arms against one, meaning it is mechanically very sound and powerful. This very versatile submission can be reached through all kinds of positions, both top, and bottom. This makes it a very effective technique that is suitable for every level, thanks to its fairly simple mechanics.

To execute the Kimura lock, one needs to obtain the proper grips, to begin with. The most important thing is getting one of your arms across the opponent’s shoulder and deep inside their arm. As a reference point, you need to place your own shoulder on top of the shoulder you’re attacking with a Kimura lock. From there, your other arm grips the wrist of the opponent. To secure the lock tightly, the hand you threaded through their arm, need to connect with the arm gripping the wrist. The grip configuration of your arms is in a figure 4 lock.

Finishing the Kimura lock requires you to bend the opponent’s arm behind their backs, in police brutality style. The position of you in terms of your opponent decides the manner in which the arm is going to get behind the opponent’s back. The key to finishing, regardless of position, is angling your body so that all your weight is behind your opponent’ss forearm. From there all you need is to look to place their own wrist on their opposite shoulder. However, you’ll get the tap way before you’re able to achieve this.

The Kimura Locks is not only a submission, despite this common perception. It is, actually, a position of tight control, that allows you to manipulate your opponent and open up transitions and/or other attacks.

A great thing about the Kimura lock is that can also be used from almost any position. Once it’s engaging you to know that your opponent is in deep water. Not only are they in constant danger, but it’s also impossible to gain any leverage back.

The closed guard Kimura is a staple of BJJ. It’s one of the first moves that people learn when they sign up. The idea is to make your opponent post one of his arms to the side so that you can place a grip. From there, it is as easy as sitting up and throwing the other arm around. Once you have the grip, you get back on the ground and look to angle off to the side you’re attacking. And, in the case of opening the guard, you just need minor adjustments. You might be familiar with some of these moves already, but we are going to try to stress some of the most important, but often ignored details.

Getting the Kimura from the bottom half guard is one of the most reliable submission options. Much like the closed guard Kimura lock, you need the arm you’re attacking to be on the ground. Since most people, either knowingly or instinctively, will grip their own pants to prevent you from finishing the lock. Here’s a great trick to counter this defense:

Side control is a very dominant BJJ position that offers all to of attacking options, The Kimura lock is just one available option from there, but it’s a reliable one.  For both grappling and MMA purposes, this is a great Kimura hunting position.

As a variation of side control, the North-South position offers amazing opportunities to get a Kimura on. From there you either submit or take the back.

The Kimura Trap System is a system developed by David Avellan. It is a control system designed around the kimura lock from every position possible. The kimura trap system includes various transitions, sweeps, passes, submissions, takedowns, and takedown counters.