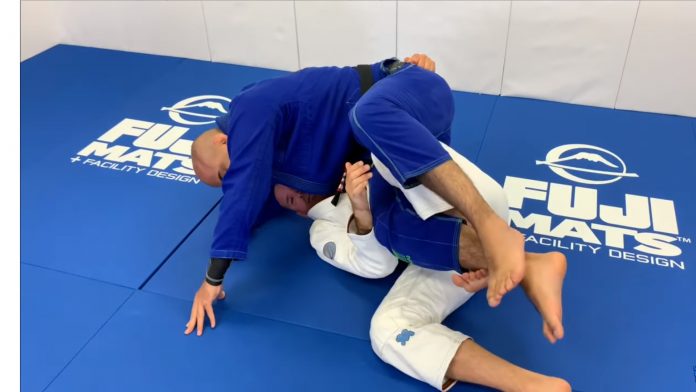 Paul Schreiner is a real scientist when it comes to Brazilian Jiu-Jitsu. He might not be quite the mad scientist (yet), but what he is working on certainly makes sense. After all, he has been a black belt for a long time and has had exclusive access to Marcelo Garcia for decades. No wonder he constantly comes up with new and exciting ways to torture people in BJJ, mostly from his favorite half guard. Today, well analyze really cool half guard sweep he likes to use, which we dubbed “the Scientist“ sweep.

The Scientist sweep is not something that’s unseen in Jiu-Jitsu. It is just a combination of things we know, done from the half guard, in a manner that’s not usual. As such, it is very effective, easy t comprehend and not hard to master, once you get enough reps in. Paul Schreiner is certainly an aficionado of the half guard, and when he delivers on something form the position, you can bet it will work against all kinds of opposition. This half guard sweep is just one example of how you can think outside the box to achieve a goal in BJJ.

Anatomy Of The Half Guard

The half guard is the favorite position of many people around the world. It certainly captivates blue an brown belts a lot (more on that on a different occasion). However, there are also black belts that are extremely proficient at it. There’s a good reason why people turn to the half guard: it is easy to get to, retain, recover, and attack from. The perfect combination. Plus, there are plenty of half guard variations out there to fit everyone’s goals.

The one thing with the half guard is that it is a guard. As such, it is somewhat limited by the confines of all guards. What I mean by that is that the only things you can do from the half guard offensively is sweep and submit. Both are great attacking tools, but the catch is that your opponents know what’s coming. What can help you achieve your goal, despite it being somewhat obvious, is figuring out different and innovative ways of executing the techniques. And the half guard is the perfect position to achieve just that.

Unlike the closed gourd, the half guard offers much more mobility. The fact that you only have your legs closed around one leg gives you mobility, while still providing you with a great amount of control fever the opponent’s hips. Unlike open guards, having closed circuit control really helps limit the opponent’s movement options. In other words, the half guard has the best of both worlds. That is why just about any half guard sweep is hard to resist, and the guard itself is not easy to pass. However, there are solutions to how you set up half guard sweeps, which is where top players excel. The scientist half guard sweep will take that ability away.

“The Scientist” Half Guard Sweep

First up, this half guard sweep, like many others, stars with an underhook. However, instead of going for the traditional underhook across the back, which often opens up Whizzers and D’arces, Paul likes to use a lower underhook. In fact, I usually call it an “underbutt” myself, for a lack of a better term. This provides great control over the trapped leg. It also opens up lots of space to shoot your other arm underneath the far side leg, in a similar “underbutt” position. Or a scoop-grip, if you will.

The next step is to get the weight of your opponent forward so that you get control of their center of balance. Lying back and pulling with both underhooks, plus extending your legs is going to get it done. However, this is a very precarious position to be in, so you’ll need to gain some control immediately. The way to do that is by extending your inside leg, so that the knee of the trapped leg twists, and you can switch hooks, trapping your opponent in a “coil”.

Before finishing this half guard sweep, Paul addresses something really important – leg lock counters. Oftentimes, when you try and sweep from the half guard, opponents use it to get to the 4/11 position and hunt for heel hooks. The way to prevent it is to use the leg controlling their trapped leg to hook from the outside, while you switch your grip to their hips. No spinning leg lock setups now!

Which brings us to actually sweeping. Instead of looking for the usual inertia based sweep, this half guard sweep is much more methodical. Al you want to do is move your upper body from underneath the opponent, ending up in a lying leg drag type of position. Paul shows a neat little trick to solidify the position here – grab the hip with your free arm by going in a half Granby. Now that you have full control, you can stand up directly in a leg drag position which opens up plenty of attacking opportunities.

The Value Of Trying Different Things In BJJ

Brazilian Jiu-Jitsu is all about experimenting. Certainly, most experiments fail miserably. But that’s expected. it is the same in science – people get things wrong over and over again until either they figure out how to get them right, or something else emerges completely by accident. There’s no point in dwelling in stuff that worked 20 years ago when the grappling game has changed so much in the meantime.

The half guard is a position that allows for lots of experimentation. It is a safe spot to launch sweep and submission attacks from, which means you can be as creative as you want, as long as you’re not doing dumb things that provide your opponent with effortless passes. The Scientist half guard sweep works like a charm, but it must’ve taken quite the while for Paul to iron out all the wrinkles.

The lesson here is simple – try new things, challenge existing dogmas and absolutes, but be prepared to pay the price. That price is losing. And no, I don’t believe in the old “you either win or you learn”, nor in “there’s no losing in training”. Losing is absolutely crucial to learning, evolving, and understanding BJJ. So, the next time you’re in half guard, play around with the Scientist half guard sweep. From there on, try and figure out your own way of setting it up, or try and explore other sweeps that might use the same principles. It’ll do you and your Jiu-Jitsu a world of good.

The Scientist half guard sweep is powerful beyond measure. It keeps you safe throughout (no D’arce or leg lock counters), it is not hard to learn and it does open up a whole new direction of sweeping from the half guard. Paul has certainly done all us half guard players a big favor in opening this door, but now we have to keep exploring what’s beyond it. Happy hunting!