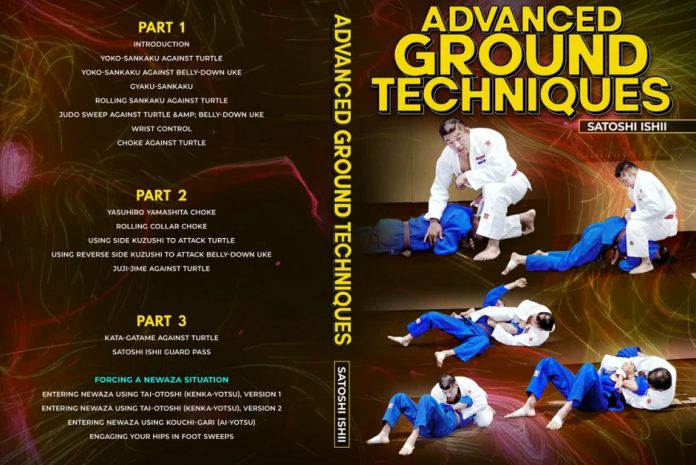 Let’ talk about a crazy idea. Would you learn ground Judo techniques to improve upon your BJJ? Most people would think about it twice. After all isn’t BJJ the evolution of Judo, especially in that department? Well, as true as that is, Judo still has a lot to teach us about Ne Waza, or ground fighting. And, when a Judoka of the caliber of Satoshi Ishii is the man teaching, you better listen. His “Advanced Ground Techniques” DVD and digital instructional will change your life!

Satoshi Ishii is one of the most accomplished Judoka in the world. But he is much more than just Judoka, he is also one of the best Judo coaches to ever live, and is an overall very experienced grappler. Satoshi is a Judo Olympian, Judo black belt, BJJ black belt, and an MMA veteran with 36 professional fights. In other words, an instructional named “Advanced Ground techniques” by Satoshi Ishii is a must.

The Accomplishments Of Satoshi Ishii

Although born in Japan, Satoshi Ishii has dual citizenship in both Japan and Croatia. He discovered Judo very early in Japan and proved to be a powerful competitor very early on. He won everything there was at all possible levels. Namely, Satoshi Ishii’s most notable accomplishments look something like this:

Satoshi also has an MMA record of 23-12-1 with eleven of his victories coming by way of submission. He fought under the Dream, World Victory Road, Rizin, Strikeforce, Bellator, and K-1. He also trained with the best in the game, ranging from American Top Team to Black House in Brazil. Satoshi is still an active fighter with Rizin. I could go on but I guess his pedigree so far is more than enough to tickle your imagination about the “Advanced Ground Techniques” DVD.

When I first saw this DVD is was really hyped and excited. I’ve spent so much time diving in Judo, Sambo, and catch wrestling to figure out ground stuff that a dedicated DVD instructional on the subject came in as a real gift! Moreover, it is a BJJ DVD by a Jiu-Jitsu black belt and a6th degree Judo black belt.

In Judo, the ground fighting portion is referred to as Ne Waza. The rules of sports Judo do not allow for a lot of time on the ground, which is why people in BJJ often think there’s nothing to learn. On the contrary, the time limits make Judo grapplers that much more effective at pulling off weird submissions with collars or snapping up lightening quick armbars. Moreover, they are the masters of the turtle position, both defensively and offensively. Just pick up the “Advanced Ground Techniques” Satoshi Ishii DVD and you’ll see for yourself.

The “Advanced Ground Techniques” DVD by Satoshi Ishii is a three-part instructional covering an intricate system of ground fighting that incorporates both Judo and BJJ. Satoshi is one of the best Judo teachers in existence and is equally good in video format as he is live. While you are limited to what he has recorded, his selection of techniques and organization of the DVD is impeccable.

The instructional opens up with a volume on triangles, before moving on to chokes and turtle attacks in part two. Part three even features guard passes, as well as methods of forcing a Ne Waza situation. All in all, this DVD is amazing for both Judokas and BJJ athletes.

The opening volume of the “Advanced Ground Techniques” Satoshi Ishii DVD is all about triangle chokes, or Sankaku Jime, as they are referred to in Judo. The setups, though are unsealed from a BJJ standpoint, as are the finishes Since going on your back will lose you a Judo match, it is mostly the Yoko Sankaku, or side triangle that Satoshi explores. he sets it up against the turtle, belly down and even in a rolling fashion.

Apart from the triangles, Ishii also talks about turtle breakdowns in a sweeping manner, as well as wrist control and how to choke out a turtled up opponent.

Continuing where he left off Satoshi Ishii starts to explore chokes. Since Judo is a Gi sport and chokes with bare hands are forbidden, all the strangling options come with the help of the Gi jacket. First up is a curious old-school Judo choke called the Yasuhiro Yamashita choke. It is sufficient to say, this one will come in very handy.

A rolling collar choke and some off-balancing options from the side to break down turtles make up the rest of this volume. The very last chapter is all about the Juji Gatame or armbar, and how you can set it up against the turtle. 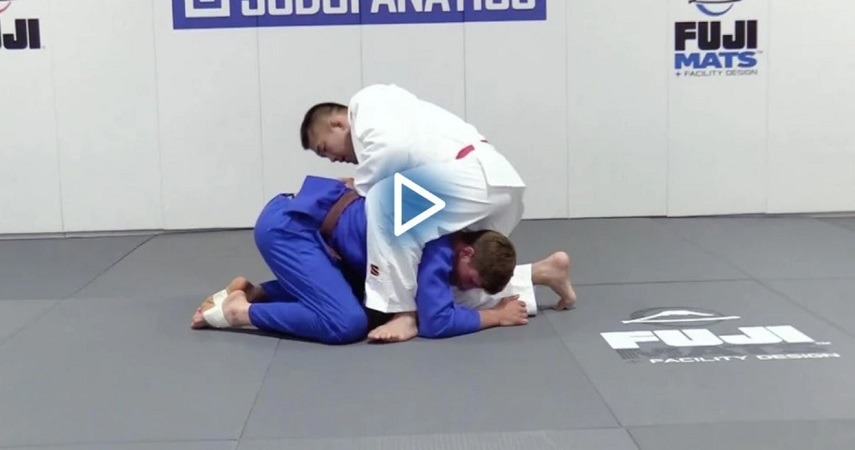 The final volume of the “Advanced Ground Fighting” Satoshi Ishii DVD covers a choke and a guard pass in the opening chapters. The choke is an arm triangle variation, while the pass is something Ishii has come up with on his own.

The remainder of the volume explores how to force a Ne Waza situation from standing, by utilizing Tai Otoshi and Ko Uchi Gari scenarios.

Judo for BJJ is irreplaceable when it comes to standing exchanges in the Gi. However, Advanced Ground Fighting techniques from Judo are just as important and valuable in grappling, with or without a Gi. This Satoshi Ishii DVD is a summary of decades of hard work and experience of an Olympic champion. Truly, this is an instructional that will help you think differently about grappling.