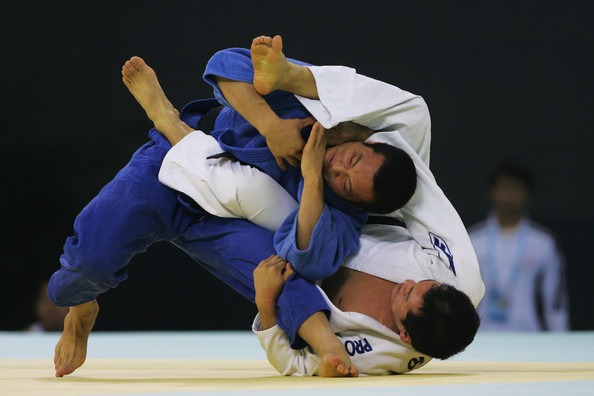 Brazilian Jiu-Jitsu is the ultimate system for battles taking place on the ground. No other grappling art comes even close to the magnitude of opportunities that BJJ offers. Despite many claiming, it is an all-encompassing art, it is not. BJJ is a specialized art and a highly specialized one at that. Judo, the BJJ predecessor and modern co-member of the grappling arts, is the polar opposite. Judo focuses almost exclusively on the way a fight reaches the ground, largely ignoring what happens after going down. So, why do both these arts focus on such different aspects fo the grappling game? Let’s peg them one against the other in a BJJ vs Judo debate and look for the answer.

Japanese Jiu-Jitsu is the common predecessor of both BJJ and Judo. This ancient system gave birth to Judo first, and through it, to BJJ much later on. After decades of each art developing in its own direction, the two still have plenty in common. However, despite their unbreakable historical bond, both arts today have more differences than similarities. This is mainly due to a few key aspects that influence both arts’ trajectories. BJJ vs Judo, which has progressed more and why? Let’s see…

Brazil vs. Japan – A Cultural View

To begin with, despite the common historical origin of both arts, they have geographically very different birthplaces. Japan, on one hand, is an epitome of Eastern culture and warrior traditions. Brazil, on the other hand, is as relaxed as it gets, with passion being commonly related to its people.  As such, both cultures influenced their respective arts to large extents.

Brazilians transformed Judo into BJJ, after learning the art from a Japanese master that lived in Brazil. They needed to modify the sturdy traditional Japanese art to their body types and character. So, the Gracies started modifying and came up with Brazilian Jiu Jitsu.

Japanese people are known to be very loyal to tradition. They’re known as calm and calculated people. In turn, Brazilians are more of a “wild card” due to their highly passionate characters. Japanese judo practitioner Nishi Yoshinori once described the Gracies as being very reckless in their martial arts approach. Seeing how Helio had his arm broken by Kimura and had almost died after being choked, one could see his point. Brazilian culture also favors challenge matches over tradition, with victory at all costs as the main goal. The Japanese have a much more structured approach, one based on hierarchy, tradition, and respect.

This does not mean that Brazilians are disrespectful, it just outlines the intricate and deep cultural influences behind the BJJ vs Judo debate.

As previously stated, the grappling areas of focus differ greatly for both arts. Judo begins with grips, as does BJJ. However, the grips play a much more important role in Judo. The principle of Kuzushi (or unbalancing) is crucial for a successful Judo game, and grips are the key aspect of it. Judo mostly takes places standing, with both grapplers looking to throw their opponent to the ground. Only if both of them end up grounded, they resort to chokes and/or joint lock, to a much lesser extent than BJJ.

BJJ can be thought of as the grappling art that continues where Judo stops. Much like Judo’s approach to ground fighting, BJJ looks at throws only as a means of reaching the ground. Once down, BJJ athletes have an extensive array of tools to dominate and finish an opponent. Such is the confidence of Brazilian Jiu-Jitsu practitioners, that they often pull the opponent over them and attack from their backs. In Judo, such action would result in a straight loss.

This brings us to the rulesets. Each art has different rules based on the strategy of combat. During the course of its existence, Judo has significantly restricted submissions and lots of “potentially dangerous moves”. To gain victory, one must throw their opponent on their back to win the match. Otherwise, different points are awarded for different actions. Submissions are a way of winning, but they must be applied in a certain, very short, time frame.

In BJJ, victory can be obtained in many ways. The clearest way is via a submission hold (choke or joint lock). BJJ’s point system is much more elaborate than that of Judo. Throws and takedowns score way fewer points than in Judo. Matches can be won by advantages or a referee’s decision as well.

BJJ vs Judo – The Mindsets

Remember the point about Brazilians being wild and reckless and the Japanese more calm and inclined towards hierarchy? Well, it all goes, pretty much down the drain in the mindset department.

The plane of movement in Judo (mostly on the feet) makes for much more aggressive matches. The nature of the art revolves around throws, which require both speed and explosiveness. Such characteristics mean that a Judo Match is much more fast-paced than in BJJ. To be honest, two BJJ athletes attempting Judo throws at a competition look very different to two Judo practitioners doing the same.

Taking place on the ground, BJJ is much slower paced than Judo, meaning there’s more time to think about things. Modern BJJ has much more of a flow about it than the start-stop action in Judo. So, in this instance, BJJ is the more cerebral approach, but only because ground fighting doesn’t allow for as much unrestricted movement as standing does. The vast repertoire of techniques available to a BJJ practitioner also influences their decision making during a fight, meaning they can take more time to achieve their goal. 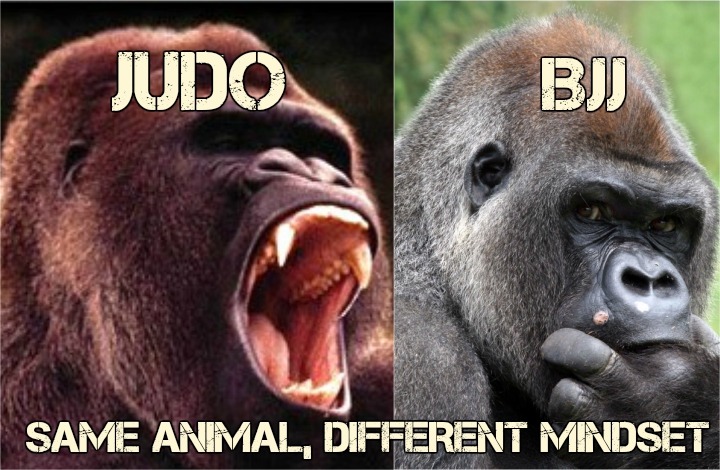 A Match Made In Heaven?

We started off this article as a BJJ vs Judo debate, but we’re going to finish it with a sense of unity. In all fairness, the differences of both arts are actually why they’re so compatible with each other.

Both arts have their respective areas of specialization, meaning they could use the other’s expertise in other fields. As such, a perfectly rounded grappler would be able to effectively throw their opponent at will. However, instead of stopping there, the match could go on thanks to the comprehensive technical depth of BJJ. In a self-defense scenario, this is a priceless combination, allowing proficiency in both areas of fighting.

On another note, both mindsets could benefit each other as well. Sometimes, a little Judo aggression on the ground can be a game changer. Moreover, staying calm on the feet could have its benefits too, keeping a practitioner from rushing into traps. A merger it is then!