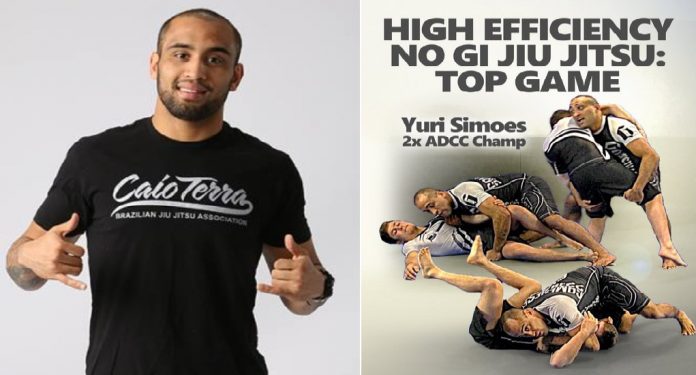 Let me introduce myself. I’m David Almar, Gracie Barra, Brown Belt. I come from a heavily Gi-based academy. In all honesty, I haven’t even dabbled in No-Gi training until blue belt. This led to my game being very Gi oriented. Don’t get me wrong, I love working in the Gi and will never stop. No-Gi, on the other hand, seems to be a new calling of mine. But the gaps I have in a certain area of the game are horrendous. So, in my pursuit to plug them all I came across a fairly new DVD release. It’s a very specifically structured instructional by one of the best in the game. I present to you “High-Efficiency No-Gi: Top Game”,  a Yuri Simoes DVD.

As the name itself suggests, the DVD is focused solely on the top game. Because of my Gi-heavy background, this is one area of No-Gi that’s been very difficult for me. Without the grips I’m used to, passing the guard is a real nightmare. Especially the closed guard of well-versed opponents. So, getting this Yuri Simoes DVD was a real easy decision for me. What I ended up is everything I looked for. Plus some unexpected bonuses.

A Bit On Yuri

In case you didn’t know, Yuri Simoes is one of the top grappling competitors out there. He is a Ricardo Vieira black belt. He’s a top competitor in both Gi and No-Gi, with the latter the preferred focus of the Brazilian.

Originally, Simoes started training with Mauricio Behring, who inspired young Simoes to become a competitor. After his death, Yuri aligned himself with Ricardo Vieira, eventually getting a black belt from him. In 2010 he traded Checkmat for Atos to train with his brother, but only for a short while. He became a member of Caio Tera’s Asociation in 2013 and his still waving their flag.

Yuri’s black belt came after an amazing 2011 when he won the Mundials, the No-Gi Worlds, and the European. He also won the ADCC in 2015 and has competed on the to No-Gi sub only stage at Eddie Bravo’s Invitational.

As you can see, Yuri Simoes knows his BJJ. More importantly, he knows his No-Gi BJJ. He is a very highly technical grappler, who regards technique over athletic abilities. It is one of the aspects that convinced me to get his material. Now, I had no idea what I was getting, since I haven’t seen one of his releases previously. In all honesty, I’m not sure he has one. Regardless, this Yuri Simoes DVD is more than enough for me.

Yuri is a very articulate person that can rely on information precisely and thoroughly. As far as I’m concerned, his instructions cover everything. The most stunning part of the DVD is its simplicity. Youri doesn’t get tangled in tangents or ridiculously complex moves. He keeps everything short and sweet, just the way I like it. His understanding of body mechanics is impressive, to say the least. he understands the opponents’ reactions so good that every little detail he stated in his material, I got to experience first hand on the mats. And boy, does it work!

Let’s look at what you will find in this awesome Yuri Simoes DVD, spread across 4 discs. You’ll be able to learn the following subjects in great detail:

What I really like about this DVD is the focus on concepts. Yuri doesn’t just throw a bunch of techniques that do not relate to each other. He offers a system of top game moves that ensure a final result.

In the first couple of discs, Yuri’s materials almost all about passing the guard. And not just about a couple of passes that have nothing to do with each other. His concept-based approach to rendering the closed guard ineffective is mind-blowing. It’s a completely different approach than the Gi one, but a highly successful one. I find it very useful and managed to pull it off in rolling a few times.

Another really helpful concept is one of breaking frames. Frames can be a very annoying structure for passers, as I’ve discovered much to my displeasure. Yuri’s strategy for dealing with them is perfect – simple and effective. And his stuff on putting pressure on turtled up opponents is unbelievable. Nobody is going to be able to stall you from the turtle position any longer!

Anybody of any age, height, weight, and skill level, can benefit from this Yuri Simoes DVD. there are not athletic prerequisites required. You can be the world’s most inflexible person and still do all his stuff with ease.

Talk about variety! Youri’s instructional is going to give you the upper hand on all kinds of guards. I already mentioned his groundbreaking concepts of closed guard passing. Well, his No-Gi open guard passes are not far behind! He demonstrates how to easily pass them all, from butterfly guard to Reverse De La Riva.

But he doesn’t stop there. The second DVD is all about dealing with the half guard. And by deal I mean smashing it, breaking it apart, going under it and all in all, dominating it. Also, you won’t have to worry about those pesky deep half guard players anymore as well. There’s a really easy and effective past them on the second DVD.

Capping off the passing sequences are the inverted guard passes. This is what I liked the most about this release. The inverted guard is a huge one for No-Gi players and a really popular way of fighting from the bottom. Well, it’s time to put a stop to that and Yuri is the man to help you do it. Believe me, you will love it!

A Few Submissions Here And There

Now, I didn’t expect much submissions in a volume on top game. I thought it would be pass-oriented, with some top positional tips included. e, it’s not like Yuri ha gone submission-heavy, but the DVD did surpass my expectations. Again the way he connects his passing game to submissions is what I really found useful.

For example, he has three finishing options, straight of an over-under pass! Since I already favor those in my Gi game, this one really clicked with me. And, have no worries you have a variety of subs to choose from in regard to other positions. A very cool armbar-kimura combination, a top triangle option from side control and some guillotine wisdom to top it all off. All in all, just the right amount of subs.

Here’s the bonus part. In all honesty, I didn’t really check all the subjects of the instructional when I went for it. I expected a lot of passing, and I sure got my money’s worth. What I didn’t look for, but still enjoyed seeing were the takedowns. Now, Yuri is known for his high-level takedown game, and he spared no details!

He first introduces takedowns at the end of the third DVD, with the high crotch single leg. Nothing new here, but lots of crucial details that I didn’t previously know. DVD 4 is all about takedowns, from double-leg to Uchi Matas. Yuri covers both takedowns and throws, along with some great counters! Talk about a complete top game! You get to learn how to take the fight down, pass and submit. It doesn’t get more BJJ specific than that, does it? Go get your copy of this awesome top game Yuri Simoes DVD. I more than highly recommend it!