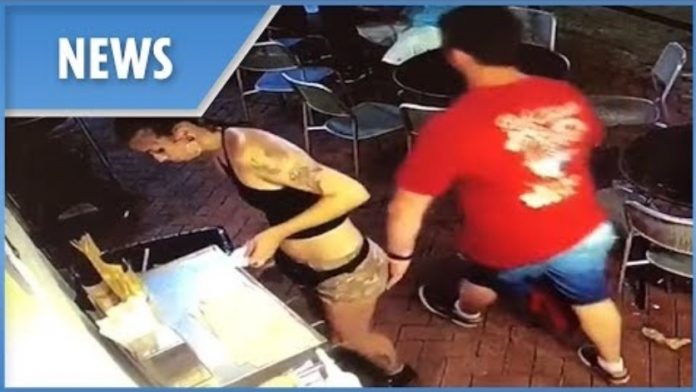 THIS is the moment a furious waitress bodyslammed a customer in a crowded restaurant – for grabbing her bum as he walked past.

CCTV footage shows Emelia Holden, 21, sorting through a pile of menus at Vinnie Van Go-Go’s in Savannah, Georgia, when the perv gropes her on his way out. But brave Emelia immediately turned to grab him by the scruff of his neck – before throwing him against a wall with one arm. She then berates him in front of other customers before telling co-workers to call the police.

The customer was hauled off in cuffs after cops reviewed CCTV footage. Emelia said: “I just did what I felt was best. I took the guy down and had my co-workers call the police. “As soon as the cops saw the CCTV footage, they immediately arrested the man.

He sat in jail until Monday so, in my opinion, he got what he deserved.
“All that I want from my experiences is for women to know that it’s okay to stand up for yourself.
“You have every right to wear what you want and you most certainly have every right to defend yourself.”