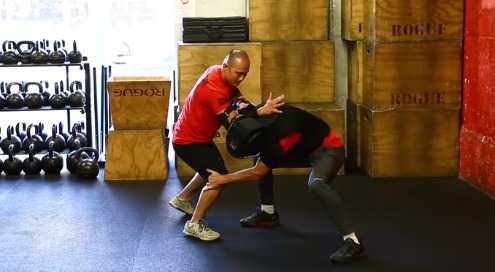 CrossFit is a pretty solid fitness regimen that can improve your Brazilian Jiu-Jitsu or any other martial art that you’re training through strength and conditioning programs. But CrossFit is not meant to be a self-defense martial art no matter how hard this guy is trying to prove that it is. Or at least not in the way that this CrossFit Instructor Adrian Gonzales is trying to explain to these guys that CrossFit “moves” will help them defend themselves.

Adrian Gonzales is basing his theory on “kinetic chain” that should help you with self-defense!? He’s actually showing the movements CrossFitters do every training connecting them with punches and kicks that you do in real self-defense situations. He said:

“If you do 150 wall balls per week and you do any other workout that has wall balls you have now thrown more power punches than pro boxers in their fights.” – interesting theory comparing wall balls to punches ignoring technique, timing, precision and a lot of other stuff that pro boxers do in a pro fight and not even mentioning boxers training time.

“cleaning a bar (Barbell Clean) has the exact same kinetic chain probably more violent and explosive than some fighters throw.” – Sure!

“mountain climbers exercise and knees to elbows exercise has the same kinetic chain as knee kicks” – it’s 100% not true- Throwing a knee has a lot different mechanism and it’s not just about the closing of the core as CrossFit exercise is done.

He even mentioned putting on a seat belt as horizontal elbows in a fight?!?!?!

The only good thing this guy said and proved is: “I’m not a martial art athlete“. And that’s exactly a reason why anything of this makes sense!

Someone should really explain to this guy that self-defense is a lot more than a few punches and kicks that he can “improve” with CrossFit without training real martial art.

As I said CrossFit can really improve your self-defense but not by training CrossFit only and for sure not in the way this instructor is trying to show.

Be Your Own Bodyguard: Kinetic Chain

Adrian Gonzales, CrossFit Workshop: Be Your Own Bodyguard instructor, explains the correlation between the movements in CrossFit and self-defense.Details about the single-day course → bit.ly/CF-SME-bodyguard

The worst thing about CrossFit self-defense is that it really exists!

Trying to convince people that are training cross fit that they are able to defend themselves is actually a crime if you ask me. It’s worse than Jay Queiroz and other fake black belts and a lot of other fake martial arts instructors. Those fake Black Belts at least watched few videos and maybe they show 1 out 10 right moves that you can really use in self-defense situations.

Making people who train CrossFit believe that they are able to defend themselves is just going to make someone completely unprepared to jump into a fight and get hurt.

CrossFit is a whole another story. When you’re training CrossFit you’re not taught to do anything you should do in self-defense situations. Neither a single thing. You can try to “convert” some of your exercises to some kicks, pushes, and punches but it’s not self-defense and it’s definitely not a self-defense martial art.

The main question is, why people just can’t leave the CrossFit to its main purpose and that’s very solid strength and conditioning competitive fitness regimen.

Check out the video below and see by yourself what kind of self-defense CrossFitters are trying to promote and how stupid CrossFit self-defense theory looks like.

Rener Gracie: Even if You’re Purple Belt You Can Get Beat Up on the Street