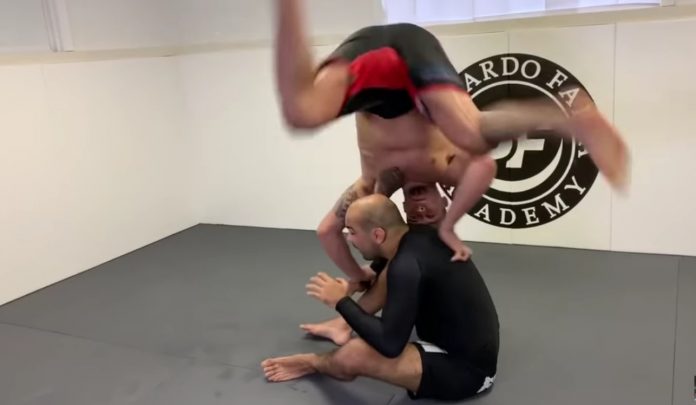 No one can say that the landscape of Jiu-Jitsu is not changing fast! Just over a month ago we saw a blue belt destroy a bunch of heavyweight seasoned black belts at the ADCC. Nicky Rodriguez got a silver medal and had one of the most memorable performances ever at the 2019 ADCC. Among the many crazy things he did, his cartwheel pass was certainly the one everyone took notice of. It is a move that not many dares to do, or when they do, they mess it up completely. Surprisingly so, there are safe and methodical ways in which you can do it. In fact, you can do it exactly the way Nicky Rod does.

Passing the guard has always been one of the more daunting tasks in BJJ. Moreover, athletically gifted grapplers seem to be ablet o solve it by way of athleticism more often than not. That gives them somewhat of an “unfair” advantage over all others. However, what people perceive as being overly athletic in Jiu-Jitsu is actually just as technical as everything else. Well, at least those moves that actually work in competition at the highest levels. Just like everything else, there are tactics and steps to it, and you od not need to be a former gymnast to execute it. Although that would help. A lot.

Contents hide
Passing The Legs
The Nicky Rodriguez Cartwheel Pass
If A “Blue Belt” Can Do It….
In Summary

I’ve already said it a hundred times that you can’t pass the guard in BJJ. For me, that phrase is completely out of touch with reality. Guard is a position designed for the bottom person to have an advantage. You need to actually go through several steps in order to pass, and even then, you’d be passing by the legs, not by the guard. If you do manage to pass someone’s guard directly, that’s a great example of a weak and ineffective guard. In that sense, you first need to nullify the guard’s offense, then you need to break the guard’s structure, and then finally, pass the legs.

For now, we’ll focus on that last aspect of passing – beating the legs. Depending on which way you go, in certain situations, you can go directly from step 1 to step 3. That’s precisely why the cartwheel pass works so well. Ther are four main directions when you’re getting past the legs: around them, under them, through them or over them. Over them is by far the most attractive of the options, but it does come with the most risks as well. But that’s only true if you have no idea what you’re doing.

First of all, contrary to popular belief, no you do not need to know how to cartwheel in order to do the cartwheel pass. Despite the name, you’re actually just
jumping over, and not really going for gymnastics here. It’s not just Nicky Rodriguez that does it – the pass has been used by many at all levels throughout the years. It is effective, cuts through most guards with ease and is very attractive to watch. Why not add it to your arsenal?

What Nicky Rodriguez so gallantly did at the ADCC was certainly at the highest level of JIu-Jitsu. In terms of the cartwheel pass, though, he actually kept things pretty simple. The best time to hit this pass is when your opponent guides you to it, not the other way around. And that’s exactly what Nicky did. Speaking of what Nicky did, let’\s ee how exactly he does the cartwheel pass.

Nicky did it standing against the butterfly / seated guards so we’ll look at it like that as well. As with every similar exchange, you need to have a foot between the opponent’s legs if you are not looking to get leg locked. He also uses a loose grip on the forehead/top of the head just to confuse his opponent. His other grip is firmly locked around one of the opponent’s wrists. That innocuous wrist grip is what makes this pass work, as you’ll see later on. From that position, Nicky uses his back leg to help propel him upwards and uses the hand that was on the head to stabilize himself on the shoulder.

The real trick with the cartwheel pass is what to do after you land. There’\s no point in cartwheeling over people if they’re only going to turn and face you again. Nicky Rodriguez likes to land directly in back control, and of course, you should too. The goal is getting a seatbelt, and the hooks will easily follow, along with all the submissions.

You might be thinking that this is not a big deal really if a blue belt can do it. However, Nicky is anything but your garden variety blue belt. He is a high-level grappler with a great wrestling background. That said, he still does the cartwheel pass to technical perfection which is the sole reason why it works so good. And there are several small details that you might’ve missed during the blur of real-life grappling.

One huge thing is the positioning of the head. If you take a closer look you’ll see that Nicky actually uses his head to balance when both his legs are in the air. The head balances on the opponent’s shoulder, allowing Nicky to start getting his arms in place for an immediate back take after landing.

The wrist grip mentioned earlier is also a big one. Nicky actually holds on to that one until the very last moment. This is the grip that has him anchored to the opponent, and also places his arm in the perfect position for the seatbelt once on the other side. Moreover, it offers safety, even if you mess it up because you can still control the opponent and maneuver them where you want.

And finally, one thing that really makes this pass work at the highest levels is timing., Nicky doesn’t just “jump” on opponents that ley waiting in guard. On the contrary, he is safe by having one foot in between the feet of the opponent first.

Next, he makes them reach forward in order for him to start the cartwheel pass. In that sense, it is a reactive pass, and without an opponent reaching forward it would be hard to complete.

The cartwheel pass is actually nothing new. Granted there are details that now Nicky shared that most people never knew of before. Danaher, most likely, ahs even more hidden details lurking there. However, it is not hard to see why Nicky Rodriguez was so successful with it – he got the timing and positioning down to a second! IF you’re looking to add the direction that leads over the legs to your passing arsenal, the cartwheel pass is, by all means, your best option.