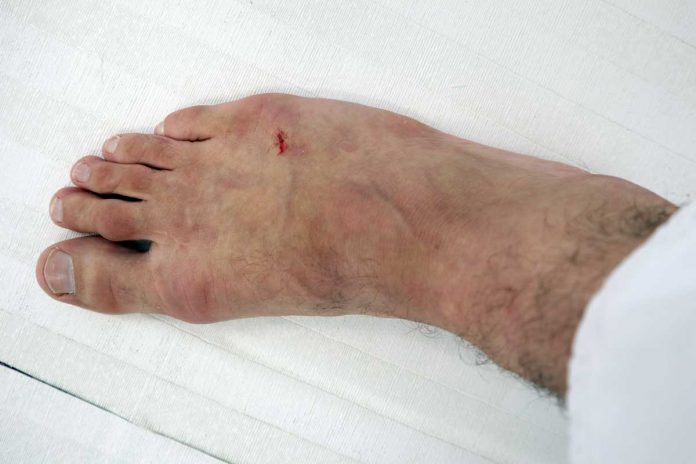 IF there is one thing grapplers fear, it is being ff the mats. The simple flu and most BJJ folks are going to act like is the end of the world and all their knowledge will disappear if they miss a couple of classes. Or, even worse, miss an open mat or two. I admit, despite preaching the opposite, I’m precisely one of these grapplers myself. It takes a debilitating injury to actually keep some off the mats. However, there’s a scarier thing than torn ligaments and twisted joints when it comes to Ji-Jitsu. BJJ Skin Infections are by far the thing grapplers fear the most, as they can keep you off the mats indefinitely. Of course, the effects on health come second to training. It is just how we are.

BJJ skin infections are usually not extremely serious. However, in certain situations, different things can contribute to some nasty diseases that might really derail someone’s BJJ journey. To that extent, the most talked-about ringworm can actually seem like a child’s play compared to some of these other skin infections. Staph is a huge and deadly serious one, which is why it’s going to get an article of its own. The ones that are serious enough to cause you real trouble and are quite common on the mats are psoriasis, impetigo, and herpes. And they’re all real and present threats that only require a little to rear their ugly microbial heads.

BJJ Skin Infections And The Issue Of Hygiene

Of course, the biggest thing that we’re actually going to start with is hygiene. It is baffling how people take such a common everyday thing like BJJ hygiene for granted. Ther are many aspects to BJJ hygiene and, unfortunately, you can’t trust people’s judgment in keeping it. This is what I’ve learned from personal experience. It takes one or two people to ruin everything you’re doing to fight and keep a gym clean. However, the good news is that once you make people pay attention to it, it quickly turns into a habit.

In those terms, you’ve got the trio of mat hygiene, personal hygiene, and the most often overlooked, dressing rooms hygiene. If you get all of them down, you’ll have no trouble with BJJ skin infections. That said, controlling individuals is still something you need to come to terms with. Some people just don’t really take care of hygiene and they need reminders. It is not that they’ have pus dripping out of open wounds, but they might be an unaware carrier of germs that can spread to others. Even worse, hey can take up permanent residence on the mats.

Regardless of how much you try, things like moisture, ambient temperature, airflow, etc are always going to impact whether or not your mats can house germs. The short answer is that it doesn’t take a lot for fungi, bacteria, mold or viruses, if not altogether, to form and stay under the mats or in corners. In fact, most of them are always there, but bad overall hygiene and a drop of immunity like during fu season can turn your gym into a “leper colony” if you’re not careful. And once you get such a reputation, you might as well close your gym.

Psoriasis is a very common skin condition that has a chronic The thing with this one is that it does not have microbes as an underline cause. It is actually the product of a much faster than usual life cycle of skin cells due to immunological reasons. That causes the cells to build upon the surface of the skin and form visible changes. As such, it has a chronic character and there’s no cure, although symptoms are quite easily manageable.

The symptoms usually include red patches on the skin, spread throughout the body’s surface. Often times they have thick silvery scales and might be itchy. The skin might also be dry and cracked and the fingernails might be ridged. The inflammation usually comes and goes in cycles and there are several different types of psoriasis. Seeing a doctor as usually is mandatory in order to get a precise diagnosis and proper treatment.

AS far as grappling goes, psoriasis can be quite painful and cause lots of discomforts. Moreover, it is something that doesn’t exactly draw training partners to train with you and might damage someone’s confidence as a result. The big thing to remember is that other BJJ skin infections, like ringworm or impetigo, can act as triggers for psoriasis. Furthermore, people with psoriasis might actually end up a lot worse if they get exposed to other BJJ skin infections when training. The thing is that psoriasis is actually not transferable even though it looks quite similar to ringworm. As such, people with psoriasis are not a danger to others, and there’s no reason to expect them to cure it and come back. However, medications that can help symptoms are a good idea, in any scenario.

Herpes is a viral infection that affects the skin. To be more precise, the exact name of the infection is Herpes simplex named after the virus that causes it. Basically, it is the same virus that causes cold sores. It is one of the most common BJJ Skin infections that can cause real problems among grapplers. In fact, there’s even such a thing as “wrestlers herpes” which shows how common it can be in grappling martial arts. In fact, during one wrestling camp, more than half the participants ended up with symptoms of this infection. That’s how fast it can spread.

The disease presents as a rash with clusters of blisters that are pretty painful to the touch. AS such, it often prompts people to stay at home, simply because of the pain and tenderness. However, the issue with herpes is that you might be a carrier and spread it long before you show any symptoms. The rash is most often on the head, but can also spread across the torso and arms. There’s also a general feeling of feeling sick, with swollen lymph nodes and headaches. The infection usually goes away on ti’s own, but it may come back. Treatment includes antiviral pills or creams as well as avoiding the gym, as the disease spreads very easily.

Solving herpes is actually extremely easy – it all boils down exclusively to hygiene. The symptoms are quite easy to notice since people can’t really cover up their face and head. Given that it is a virus, there are many possible complications, including triggering psoriasis or inviting others, mostly bacterial, BJJ skin infections.

The last of our BJJ skin infections for today is impetigo. This is one you might not have heard of, but it is right up there with the most common of grappling skin diseases. The culprit is actually staph, although not one that’s as dangerous as MRSA. In this case, it is mostly Staphylococcus aureus or Streptococcus pyogenes. Or both, if you’re really unlucky. 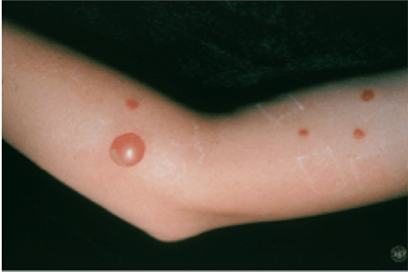 Impetigo is easy to recognize as a result of the yellow lesions that appear across the body. The limbs are usual hotspots. There’s quite the itch that accompanies these lesions, as well as a rash that might turn to blisters. Pain is not usually present but may appear in some cases. The reason we feature this disease is that it is the most contagious of them all and can easily spread within an academy. Cuts and abrasions are particular hot spots for the emergence of this infection, and we all know how common they aria n Jiu-Jitsu. Once again, hygiene is huge here, and particularly dressing room hygiene, since there where people usually walk with shoes. Treatment depends on the type of bacteria but usually involves antibiotics. Exceedingly bad cases might even require surgical interventions.

A word of caution

See a doctor. Do not attempt to solve common BJJ skin infections by yourself. One thing to consider is that not all over the counter creams might actually help resolve your problem. Furthermore, stick to proven medications, as Chad Mendes still claims that psoriasis medicine is to blame for a failed drug test in the UFC> That said, a bit more personal hygiene never hurt anyone. And finally, if you run into someone that has visible skin trouble, ask what it is. People with psoriasis are no danger and there’s no need to treat them as lepers.

The Best BJJ Soap Bars To Stay Free Of Ringworm