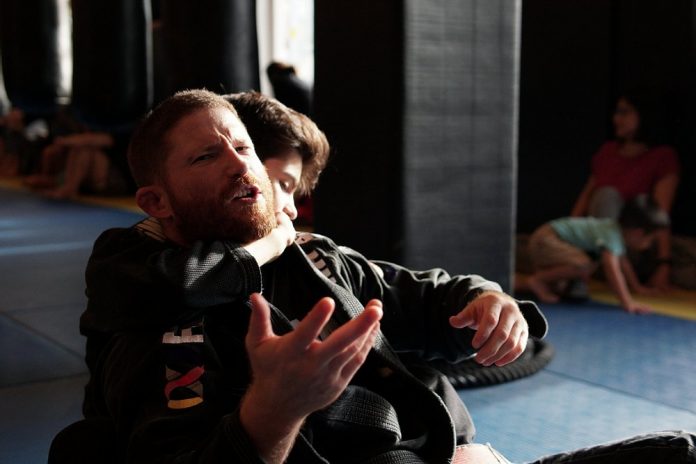 What are some things you should never say to a BJJ professor? Yeah, there are such things and yeah, you should know them and avoid telling them to professors, instructors or coaches. No matter how chilled out and relaxed they seem, BJJ coaches really do have a lot on their plate, and sometimes, hearing the same things over and over again can really be testing for their patience. Moreover, these are not things that can help you on your journey, so you better steer clear of them as much as you can.

What are the 7 things you can’t say to a BJJ professor? You’ll learn all about that further down in this article. What is important first is to understand that BJJ professors are human as well, and they also have bad and good days. Moreover, they spend a lot of their time trying to make your BJJ journey as entertaining as possible. Not only that, but they’re completely approachable and open to talk, on the mats and off them. This last aspect is one that can sometimes be quite abused by students, especially when they ask certain things of their instructors.

Contents hide
Your BJJ Professor Doesn’t Have It Easy
Never Say These 7 Things To Any BJJ Professor
1. But Gordon Ryan Does It Differently…
2. Why Do I Need This?
3, When Am I Going To Get A Belt?
4. But What If… at the wrong time…
5. That Won’t Work / I Can Never Do It
6. Can You Show Me A Flying (insert BJJ move here)
7. You Either Win Or You Learn (and other bulls#*t quotes)
Bonus Thing
Summing Things Up

Your BJJ Professor Doesn’t Have It Easy

If you think being a BJJ professor full time is easy, you need to reconsider. It is fun, that’s beyond a doubt. However it comes down to being a job, and despite it seems like the dream job, and is one instructor does love, it does have its bad days. Dealing with people is not easy anyway, especially when you have hundreds of members at an academy and staff looking up to you for everything. It is one of those sweet troubles to have unless you’re not having a good day. that’s when all the stuff BJJ professors face can get the better of them. Running an academy means that first and foremost, people need to be safe on the mats. Next up, they need to have fun and learn at the same time. These are already daunting tasks in any area of life, let alone a full-contact combat sport, especially in trying times like now, with the Covid-19 pandemic at large.

Apart from that, there’s the logistics. Planning classes organizing competitions, running the financials, leases, hygiene, administrative staff, legal/political stuff, community, web pages, etc. Plus, everyone is always trying not just to roll with you, but take a piece of your home as well, which can really be exhausting at times. And if you can imagine the worst possible day in doing all of these (and there are several of those every year), it is only fuel to the fire when students ask some of the stuff that makes instructors want to throw their Gi off and jet out to a deserted island somewhere.

Never Say These 7 Things To Any BJJ Professor

On the subject of things you should avoid saying to your BJJ professor, there are 7 main ones that really do annoy instructors greatly. That said, it is important to note that some of them are stuff people say on the mats outside of class, while others are the things that every instructor hates hearing during class or rolling. Since asking dumb stuff won’t really help you get better at Jiu-Jitsu, at least be aware of the 7 things you should not ask BJJ professors unless you’re willing to feel their wrath!

1. But Gordon Ryan Does It Differently…

This one really drives me crazy from time to time. It takes a lot of time to put together a class for a week or a month, especially when you have different groups and levels of people on the mats. there is a reason why some things are shown in a certain manner or said in the way they are. trust me, your BJJ professor also had to learn it all at one point and knows how to transfer that knowledge in an easier manner to you.

Telling them that Marcelo Garcia, or Gordon Ryan or anyone else does it differently is one of those things that drives instructors crazy. They know. Let’s just leave it at that. They have their reason for showing it differently, and one of those reasons is that you’re far from Marcelo or Gordon. So do what is shown, and do not point out needless stuff.

This once again has to do with class structure and your overall progress. There’s a reason why you have a BJJ professor – they know more than you, and are there to teach you. If you can’t see why you need something at the moment, that just means you need it way more than you can imagine. Professors know this and will teach you exactly what you’re lacking or lagging in so that you can actually pull off all the fancy stuff you’re looking at on YouTube.

This is something that your BJJ professor will be patient with…the first ten times you ask. Once again, you can’t rush a belt, like you can’t rush most of the important things in life. You can’t even try and rush a stripe for that matter. The best way to progress faster is to show up, and do what the instructors say. It is as simple as that. Asking constantly won’t get you there. It is like asking a driver “are we there yet” after every mile when there are hundreds of miles to the destination and you know it. Don’t annoy your BJJ professor needlessly and focus on what you’re actually doing on the mats.

Yup, the one that is probably the most annoying of all the stuff you should avoid asking your BJJ professor. A common answer I like to give is that there always is another what if and if we try to get into it, we’ll never be able to actually practice a move. But that is when I’m patient about things. It just so happens that these “what if” people are the same ones over and over again, always looking to ask about different options.

Trust me, instructors are not trying to hide things for you, they’re just trying not to overwhelm you. You have no idea how much deep they can go in just one move, and leave you utterly confused. Just trust the process, and all your “what if” questions (and more) will be answered down the road.

This is something that does not annoy instructors as much as it saddens, them, really. People often underestimate their abilities, despite the fact that an experienced BJJ professor knows exactly what someone can or cannot do just in the glance of an eye. So, go for it, you’ve got nothing to lose, right?

It is not just good to avoid asking /saying this because of your professor, but also because of your own mindset. Just believe that you can learn everything, which is, by the way, the reason you’re in the gym. If you knew how to do it, you’d be at a different place.

6. Can You Show Me A Flying (insert BJJ move here) The thing is, your instructor might just oblige and show you the move. Then what? You can’t do several of the key basic moves that lead up to it, so you end up wasting your time, the coach’s time, and perhaps the entire class trying to do something that you’re still not ready to do. Once again, you need to trust the process. Expressing your interest in a subject is one thing, and you should let instructors know which direction of BJJ you like the most. However, you’ll need to let them guide you there, and not try to fly over key steps of any move.

7. You Either Win Or You Learn (and other bulls#*t quotes)

I’ve spoken about this earlier, but let me just reiterate the point again. There’s no way you’ll learn anything in Jiu-Jitsu if you do not learn how to lose first. It is a sport where you’ll inevitably lose, on a day to day basis. And no, there are no participation rewards. So, relying too much on quite like this just means you’ll be looking for excuses instead of actually learning something and improving. It just so happens to be one of the quotes that will annoy a BJJ professor a lot. That and other crazy quotes and popular terms that I won’t mention here today.

The bonus thing only applies to Infinity BJJ Split, and probably to a lot of other gyms as well. Never say I can’t fix the music or youtube is not working, or someone before f… it up. Just f… fix it, Jerry. That’s your only job in the gym.

At the end of the day, your BJJ professor does have your best interests at heart (most of the time). It takes massive amounts of dedication to run an academy nowadays, and have a great connection with every student on the mats. It is possible, but demanding and asking about certain stuff of your instructor is a great way of annoying them and getting them. And those are not the folks you want to annoy, especially with rolling looming at the end of class.