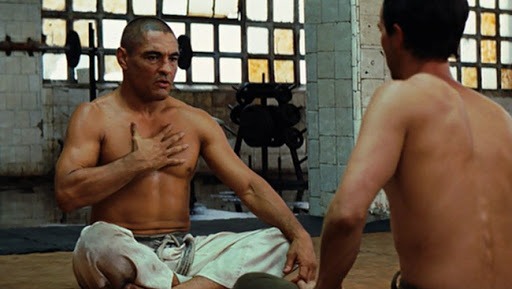 You’ve seen choke. I know you have. That iconic documentary is something every Brazilian Jiu-Jitsu and MMA fan has seen at least once. And I also know what caught your attention the most, despite all the fights Rickson dominates in there. It was Rickson doing his crazy Yoga things on the beach and doing that even crazier breathing. Just like everything else in the movie, the breathing played a huge role in Rickons’s success as a fighter, and later, his son Kron’s as well. Let’s take a closer look at the Rickson Gracie breathing method.

Rickson Gracie is one of the best fighters/grapplers to have ever stepped on the mats. With him living in a whole different era of fighting we’ll never know how he would’ve faired against today’s fighters. Training for combat sports has reached a crazy new level lately, with lots of science going into developing the perfect fighter. However, some of the old-school methods, like the Rickson Gracie breathing are irreplaceable when it comes to bringing every aspect of training together and becoming a complete fighter/grappler.

Contents hide
The Importance Of Correct Breathing In BJJ
The Rickson Gracie Breathing Method
How Can You Use It?
Conclusion

The Importance Of Correct Breathing In BJJ There are plenty of methods people use for breath control in combat sports. The goal is to try and keep a steady rhythm that will constantly provide you with oxygen for your working muscles. The problem is actually achieving that when your whole body is tensing up, when you’re fighting to get out of the tightest imaginable mount and when people are all over you in a roll. It not, impossible, though, and the Rickson Gracie breathing method is one example of how you can integrate some breathing exercises in your training to help your grappling performance.

So, what is the correct breathing method for BJJ? I’d say anything that works for you, but starting with something tried and tested is always a great idea. Yogic breathing does offer a bunch of different ways to control your breath, and that’s exactly where Rickson got his ideas from. There’s hardly anyone better than Yogis and their thousands of years of researching and studying breathing to teach you al about how this everyday thing should be done right.

What exactly is the Rickson Gracie breathing method for Jiu-Jitsu? This is a modified version of Yogic breathing, to put it in simple terms. Rickson himself learned about the method from Orlando Cani, a Brazilian Yoga instructor, and movement specialist. The breathing Rickson does in “Choke” is a common way of ending Hatha Yoga classes, which is what Orlando taught in Brazil. The name for breathing techniques in Yoga is “Pranayamas”.

In the documentary, Rickson sits in a lotus position and uses a very specific forceful breathing method. At the same time, he involves his abdominal wall to what seems to be an extreme degree but has a key y role in making this breathing method so efficient and beneficial.

From a physical standpoint, the Rickson Gracie breathing method provides more oxygen, because it is focused on diaphragmatic breathing. When using the diaphragm during physical exercise, the body suffers much less in terms of oxygen needs as almost twice the oxygen that is usually inhaled can be brought into the lungs. This is due to the diaphragm being situated under the lungs, when it works it helps expand the chest more and thus, allows more oxygen to enter the lungs.

There’s another aspect of breathing that’s helpful, and that is the mental aspect. Using the Rickson Gracie breathing method will pride you with peace of mind and a calmness that has a carryover to the mats. It also ties in with the physical aspect of things, given that calmer fighters usually breathe better and tire out less.

All in all, the main benefit of breathing for BJJ are calmness of the mind and increased endurance of the body.

How Can You Use It?

Setting up the Rickson Gracie breathing method for yourself is not hard. You have two ways of going about it: you can go and research Yogic breathing and Pranayamas, or use several simple exercises that we will share with you today. The breathing starts easy, with a focus on using the diaphragm and belly to breathe, rather than the intercostals muscles and chest wall. This is best mastered in a supine position, by placing an arm on the belly and the other on the chest. Only the arm that is on the belly should be moving when you inhale and exhale to truly get the hang of diaphragmatic breathing.

You can then move on to using diaphragmatic breathing when seated. This is where the full Erickson Gracie method comes into play, along with the abdominal wall movements which have the added task of massaging the internal organs. At first, you’ll need to focus on sucking the belly in as much as possible, and holding the breath in, to get accustomed to it. Then comes moving the belly side to side and in circles to really give the organs a massage.

Finally, you can use the birthing method while you’re doing warm-up exercises, to teach your body how to brat while doing physical activity. Only when you’re proficient at this can you think about using the Rickson Gracie breathing method during rolling or in a match.

Rickson shares his breathing system a lot in seminars and places great value on it. His son Kron, who currently fights in the UFC is also a big fan of the Rickson Gracie breathing method and has been featured using it in his preparations for fights. Simply put, breathing is the piece of the puzzle very few consider, but everyone needs it. Why not use what the best of the best have proven works?