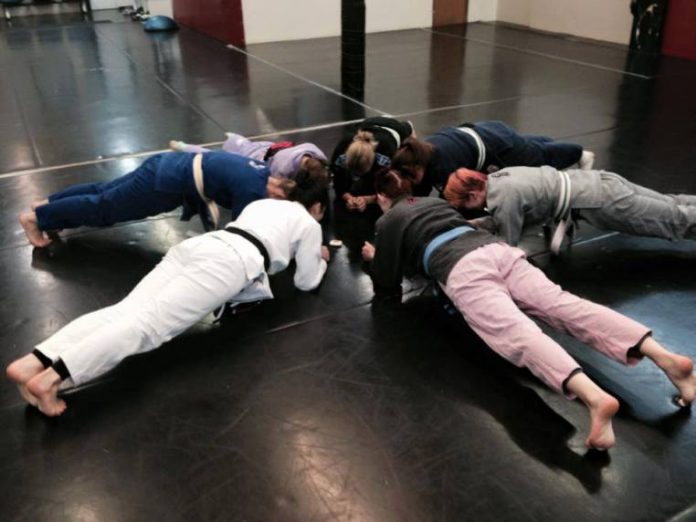 Are you training your core efficiently for BJJ or just training your abs for the beach? There’s a difference between a functional BJJ core workout and one to make your abs burn. The core is more than just the abdominal muscles. Furthermore, the exercises to target it completely involve far more movement patterns than just crunching. We bring you the ultimate BJJ core workout for grapplers.

Having a strong core is a sign of high-level athleticism. Just look at gymnasts for an example. They spend a lot of time training their core and are capable of impressive feats of strength and athleticism as a result. Not only that but if you put a gymnast into any other sport, they’re going to find their way quicker compared to other athletes. A lot of this si due to their maximally developed cores. Before you go sing up for gymnastics classes, understand that their workouts might not fit you best. A BJJ core workout needs to be specific for the needs of grappling. In that sense, you should aim to make your core as proficient as possible in the movement patterns most common to grappling martial arts.

A good core workout needs to include every muscle group that makes up the core. Furthermore, it needs to stress every muscle group in a way specific to its function. Some muscles are more of “workhorse” muscles, tasked with contracting the core. Others have a more isometric role, with the main goal of stabilizing our bodies. Different movement patterns differently affect all of these muscles. Add to that the specific needs of BJJ and all the complex positions we get to in rolling and you can see how important the core is for Jiu-Jitsu. However, A BJJ core workout doesn’t need to be complex and elaborate. On the contrary, it just needs to include all the important aspects in a very simple and straightforward fashion.

Contents hide
The Role Of The Core In BJJ
Core Training Movement Patterns
The Ultimate BJJ Core Workout
Dead Bugs
Anti-Rotation
Fallouts
The Pallof Press
Advanced Plank Variations
If you’re more into Home workout here is one very good and simple BJJ Core Workout Program that you can do daily. It consists of:
Related Articles:

The Role Of The Core In BJJ

While we’re rolling or competing in grappling, sudden changes of direction occur where often and very fast. In most cases, these movements are done against a resisting opponent. This means that the core needs to be able to withstand both the speed and the resistance of the movement.

For example, a grappler looking to pass the opponent’s guard has to be able to change directions and maintain balance at the same time. A weak core is not going to be able to cope with the stabilization demands of such movements. The core has a role of transferring power from the more powerful lower body to the upper. IF the core is unable to handle the load, the transfer of power is going to suffer as an effect.

This translates to a slower and more strenuous change of direction which means less effective passing. Furthermore, if the balance is completely off, there might even be a sweep incoming.

A very important role of a strong core is also in injury prevention. The physical demands of Brazilian Jiu-Jitsu very often result in the occurrence of injuries. A strong core goes a long way toward providing insurance against injuries. And the only way to get a strong core for grappling is through utilizing the correct BJJ core workout.

The basic exercises that should be a part of a BJJ core workout worth its while are based on a few distinct patterns. First, there’s the usual contraction, which pulls your core muscles together. The crunch is one example of such a concentric movement. An arch up is another, for the muscles on the opposite side of the abs. Rotational movement patterns are also concentric in nature.

Next, the eccentric movement. This is the movement that returns your muscles in the starting position. The path from a maximal contraction to the starting position, though is still filled with resistance, albeit diminishing. If you skip over this movement pattern, you’ll only be training one aspect of your core. This inevitably leads to an imbalance due to neglecting a very important part of core training. Think about slowly lowering your legs after doing a hanging leg raise.

The next big puzzle is an isometric strength. This is the ability of the muscles to stay contracted for a prolonged period of time. In grappling terms, this is one of the qualities that is called upon more often than others. The plank is the perfect example of an isometric core exercise. The advantage of this exercise is that it covers all the muscles of the core, from an isometric standpoint.

Finally, there’s the ability to resist movement that comes from an external source. These movements are anti-extension, anti-flexion, and anti-rotation. For Jiu-Jitsu, these types of movements are probably the most important in terms of core training. Think about resisting an opponent trying to sweep you by using sleeve grips to disrupt your posture and balance.

When it comes to grappling performance, all the crunches and sit-ups won’t help you grapple better. Most “mainstream” core exercises don’t actually improve performance on the mats. This is mainly due to the fact that they’re either not really core exercises, or are incomplete ones. It’s like training a sweep, but without actually ending up on top. Hardly worth even an advantage, right? To really boost athletic performance for Jiu-Jitsu, give the following BJJ core workout a try. Here are the main exercises:

These hit the transverse abdominis while keeping your spine neutral. The basic version is simple, but once you master it you can add external resistance. Bands are the best fir to make this exercise harder.

To perform dead bugs, you need to be lying on the ground, your lower back completely flat against the mats. First, exhale as you lower one of your legs and the opposite side arm to the floor. On the inhale raise the limbs back to the starting position. Keep the non-moving limbs still throughout the motion. Repeat on the other side.

Anti-rotation exercises are as important as they are underestimated. When performing planks, grapplers usually gain some benefits of this type of movement but it is not enough. Here’ a great exercise to include in your BJJ core workout

Using a resistance band, set up in a standing position. Focus on keeping your back straight so that you activate your whole core. Have a partner pull the band repeatedly. During this, do your best to maintain your starting position with as little movement as possible!

This exercise focuses on lumbar extension as the main motion pattern. Fallouts are arguably the most challenging anti-extension exercises out there. If you decide to stand on one leg only while performing them there’s the added bonus of anti-rotation as well.

Start from a slight forward lean. From there, allow yourself to fall forwards without sagging your back. Make sure the core is firm and both your arms are straight. Once you’re as far out as comfortable, shift your weight onto your heels to get back to the starting position.

This is probably the most popular anti-rotation exercise that includes moving your arms. Maintain a neutral spine and a firm core.  At the same time, the goal is to move your arms and legs. You can see why this is a crucial exercise with a great carry-over to Jiu-Jitsu.

Using either a cable machine or a band. First, get in a kneeling position, keeping your arms at chest height. Set up away from the stack, so that you create a constant resistance. If you’re using a band, set up far enough away until the resistance is challenging. Press your arms outward while trying to keep your trunk in a fixed position.

This one requires a partner to anchor you down. Apart from this, it is by far the ultimate anti-lateral flexion exercise out there. Go with just your bodyweight on these at first.  Be aware that weighted versions require a lot of time and repetition.

Lay on your side on a bench or table. Make sure that your lower body is anchored in with a partner. If you can find another method to secure yourself, you might be able to do it by yourself too. Line your hips up with the edge of the bench and try to lock in the position. The goal is to hold the position for at least 15-20 seconds without moving.

If you’re more into Home workout here is one very good and simple BJJ Core Workout Program that you can do daily. It consists of: 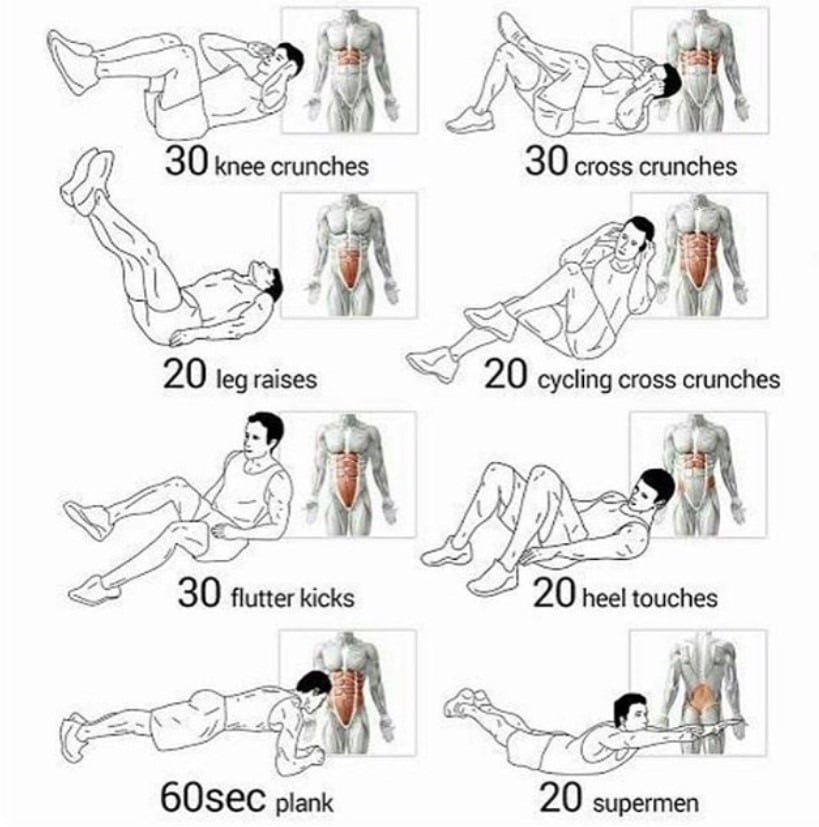 Gymnastic Exercises To Strengthen Your Core For Jiu-JItsu
How to deal with Back Pain, Sciatica problem in BJJ
Want The Jiu-Jitsu Body Of Gordon Ryan? Train Like This To get It!
Sciatica Stretch Variations To Fix BJJ Lower Back Pain
This Is How Stretching For BJJ Should NOT Be Done!