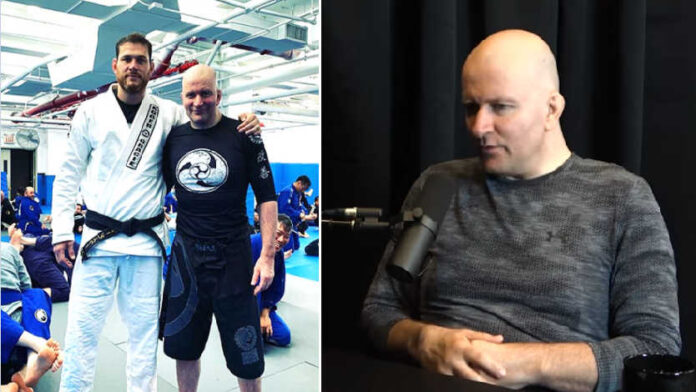 In Lex Fridman’s podcast, John Danaher gave his opinion on who’s the best Jiu-Jitsu practitioner of all times, but also made a distinction between four faces of Jiu-Jitsu.

Lex Fridman:
Who the best Grappler ever?

John Danaher:
I Believe that the greatest Jiu-Jitsu player that I ever met, and I believe of all time… I don’t wanna sound arrogant on that because you can go only with your own experiences and there are some great athletes that other people mention that I just never met. But in my estimation, the greatest Jiu-Jitsu player of all times is Roger Gracie.

My reasoning for that is that out of four faces of Jiu-Jitsu he excelled in three. In two of them in particular he was the best of his generation by a landslide.

In Gi grappling, no-gi grappling Roger dominated his generation to a degree that is truly impressive.

Lex Fridman:
What do you attribute that dominance to?

John Danaher:
In MMA he was at his peak, I believe, ranked in the top ten. He wasn’t the best in Mixed Martial Arts the way he was in grappling but he was damn good. He beat some significant people. He showed tremendous versatility in both Gi, No-Gi, and MMA.

He’s not really known in the world of self-defense, but there’s no real criteria by which you would become dominant in self-defense. But I believe if Roger gets into a street fight he would do just fine (laughs).

If you look at Jiu-Jitsu for what I believe it is, sport with 4 faces, you have to with Roger Gracie. He’s the guy who went out and empirically proved his ability to go across those elements and do extraordinary well in all of them.

He also made a step of coming out of retirement and beating the best of the generation that came after him, Marcus Almeida, ‘Buchecha’. That is a truly impressive accomplishment.

Lex Fridman:
I would like to talk to you about Gordon, Roger, and GSP (George St. Pierre). Let’s first talk about what do you think makes Roger Gracie so good as all these mentioned are very different artists

John Danaher:
Roger was probably the living embodiment of someone who played classical Jiu-Jitsu game around the fundamental four steps of Jiu-Jitsu.

If you took someone who had taken intro lessons in Jiu-Jitsu for three months they would recognize the outlines of Roger’s game as many of his techniques they learned in those first three months.

Roger was the best example of the dichotomy between the fundamentals of Jiu-Jitsu but also a kind of hidden sophistication underneath those fundamentals.

People always say Roger’s game was so basic. No, the outlines of Roger’s game were basic, but the degree of sophistication and application was extraordinary. His ability to refine existing technology was truly impressive.

I never saw anyone in his generation that even came close to his ability, both in competition and gym.

Lex Fridman:
So, for the people who don’t know, Roger Gracie was using simple techniques on the surface from the outsider’s perspective that most people learn when they start Jiu-Jitsu. Techniques like passing guard in a simple way, taking mount and choking from mount. Also, when he’s on his back, he’s in closed guard doing all the basic submissions from closed guard like armbar, triangle… He was able to dominate, control, and submit the best people in the world for many years as you said.

Including coming out of retirement and beating the best, perhaps, by far the best, of the next generation.

Are there some lessons from his system that u used to develop your own system?

John Danaher:
Great question! The thing that always impressed me the most about Roger was his relentless pursuit of position to submission. Everything was done with the belief that no victory was worthwhile if it didn’t involve submitting his opponent.

That’s a mindset that I try very hard to imbue to my students.

The easiest part of victory is the one that takes the least risk. For example, you’ll see many modern athletes focus on scoring the first point or the first advantage, and then doing the minimum amount of work to reach out the victory once they get that small tactical advantage.

They realize they’re ahead, they take no more risk and just do the minimum amount of effort to get the victory

Roger’s mindset was always to take the riskier gambit of submission which entails a lot more work and in many cases a lot more skill.

What I always liked about Roger is he never liked to play tactics. It was always, just go out there and try to win by submission. That, more than anything, that mindset of looking for the most perfect victory rather than the victory that takes the least skill and least effort is the thing I took from his career the most. That’s what I tried to work upon in my students.

Who is the BJJ GOAT?

Best BJJ Fighters: Who Are The GOATs Of Jiu-Jitsu?