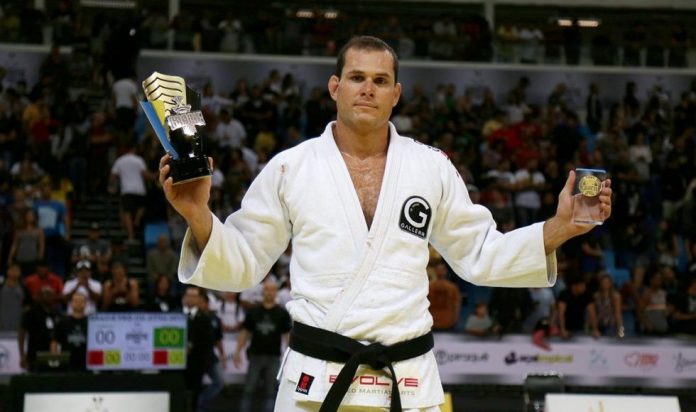 When we talk about Brazilian Jiu-Jitsu competitors, there’s no way we can skip over Roger Gracie. the esteemed Gracie black belt was an accomplished competitor both in BJJ and MMA. He is a multiple-time World champion and has beaten some of the best black belts ever. The most interesting aspect of Roger’s game is that everybody knew what was coming. Even then, only a few could do anything about it and none were effective. Much of this is due to the fact that Roger Gracie always focused on the Jiu-Jitsu fundamentals when competing.

Today, Brazilian Jiu-Jitsu has evolved into a  very complicated competitive sport. The general approach is that of innovation and figuring out how to surprise your opponents. In that sense, people tend to move further and further away from the Jiu-Jitsu fundamentals. AS groundbreaking and, at the same time, obvious, it may seem, going back to fundamentals can be an innovative approach in its own. Roger Gracie never went away from the fundamental principles and go the highest accolades of the sport. But how did he manage to use the Jiu-Jitsu fundamentals to such great success?

Roger Gracie is a Carlos Gracie Jr. black belt that is arguably the greatest Brazilian Jiu-Jitsu competitor of all times. He won the World title an incredible 14 times to date. What’s more impressive is that 10 of those titles are at a black belt level.

Roger was born in Rio as the son of Carlos Gracie’s daughter Reila Gracie. much like the other members of the Gracie family, Roger started training Jiu-Jitsu at a very young age. By the time he became a teenager, Roger was already a great grappler. he moved to London when he was a blue belt and reinvented himself there. His uncle, Carlos Gracie Jr. awarded Roger with his black belt in 2004.

Roger (now retired) was an amazing competitor at every belt level. he is a true representative of the Gracie Jiu-jitsu style. As a “fresh’ black belt he won the ADCC, submitting all 8 of his opponents. his high submission rate is a constant across all his competitive outings. After conquering the world of Brazilian Jiu-Jitsu, Roger moved on to MMA, signing with Strikeforce. He had a very successful MMA career in the organization, despite a short and less rememberable stint in the UFC. Today, he runs the Roger Gracie Academy out of London, with affiliates all over the world.

In a debate as to who was the greatest heavyweight grappler of all times, Roger went against young gun Marcus “Buchecha” Almeida on two occasions. The first took place under the Metamoris banner in 2012. Their second encounter took place just last year.

In a clash of old school vs. the new, Roger put his Jiu-Jitsu fundamentals to a stern testa gainst up and comers Buchecha at Metamoris in 2012. After a hard-fought 20-minute round, the match was declared a draw. Even then, it was an amazing accomplishment for young Marcus, who went on to dominate the heavyweight scene while Roger went on with his MMA career. The opinion of the masses was that in a point-based system, Buchecha would’ve won.

N their second match, Roger appeared to have taken things way more seriously from the get-go. As far as Jiu-Jitsu fundamentals go, this was a clinic. Roger demonstrated a masterclass of Jiu-Jitsu fundamentals, ultimately finishing Buchecha from the back. Later, the GOAT explained qhat he was doing during the match and how he choked out one of the world’s toughest grapplers.

Right after the win, Gracie announced his retirement from the sport. He left Jiu-Jitsu without a single submission defeat in his record and now focuses on his return to MMA inside the ONE Championship cage. Gracie, the ONE Championship light heavyweight titleholder, has an MMA record of 8-2.

Roger Gracie is perhaps most famous for his mount and finishing opponents with the most basic cross collar choke from the top. It is a technique that a beginner might learn in a Jiu-Jitsu fundamentals class, yet Roger submitted world-class level black belts in competition using that same basic choke. His tips on the position are as follows:

“After I get the first hand in the opponent’s collar, that’s when I get the most vulnerable for the bump. So, what I do? I use my other arm to defend the bump and then I use the top of my head. That’s when I put the second hand in.  If the opponent is defending well the collar, I go around his head and put only my thumb inside his collar before I go for the choke.”

Roger uses his leverage advantage and weight to apply big pressure to his opponent from the mount. Starting with the hand in the collar grip, Roger puts the opponent on the defense immediately. In the following video Roger explains an important gripping detail that makes his choke really  tight:

Roger’s answer to submitting elite level black belts and the reason his  “basic” techniques are so difficult to stop is that he attacks in combination. Which attack does the opponent defend? The choke or the armlock?

The opponent on the bottom fatigues due to the pressure from the top. That creates an opening for an arm lock when they defend the choke. If they do not defend the choke, the tap is soon to follow.