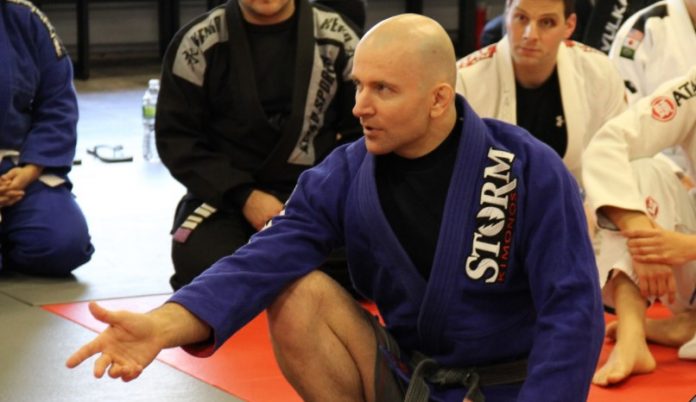 If you think that you’re having a hard time in your academy with your instructor you should check this story from Tom DeBlass.

Tom DeBlass explained what’s going on when John Danaher is teaching you. He brings the real story of a guy who got stricken on his back by three vicious strikes to his back.

“Prepare for an amazing story..
Everytime training with the Danaher, you truly don’t know what to expect. Often times during a private lesson an argument will break out always ending with John winning with a plethora of vicious verbal attacks. It’s simple, however, if you execute the technique he is asking you to do, he is happy. If you don’t execute, he is very very disgusted. Yesterday David was asked to go in turtle position as John was demonstrating. For some reason, David hunched his back. After the 2nd time, John tried to correct him and David didn’t listen, John rained down three furious vicious double forearm strikes to David’s back. (David then listened) This ranks among the top 3 moments in my life, I was so damn happy. Next time you message me about having a tough training day ask yourself if you can last 5 minutes in our world”

We can’t say that Grappling martial arts are full of behavior like this. Maybe some traditional grappling Martial arts like Japanese Jiu Jitsu where students are taught that their instructors are some kind of masterminds. But in modern time it’s pretty unacceptable that an instructor put his hand on you. Especially not if you’re doing something wrong in the class you pay for.

Although we can’t say if Tom DeBlass overstated this a bit more than it really is so so we’ll wait for his explanation. We’re sure it will come very soon!

What’s your opinion on this? Would you tolerate this kind of behavior?

Prepare for an amazing story..Everytime training with the Danaher, you truly don't know what to expect. Often times…