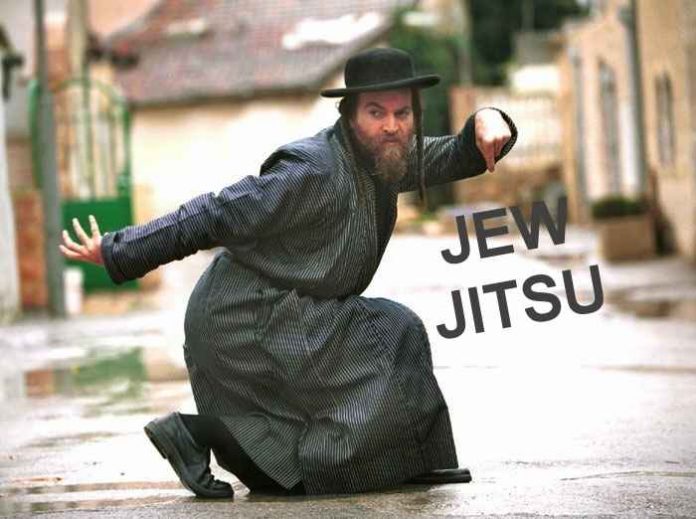 Brazilian Jiu-Jitsu is nothing if not diverse. It takes just one look at the roots of BJJ to see that. Originating from Japan, developed in Brazil and eventually, spread all over the world. Asia, South America, North America and then everywhere. It is an art that transcends national and racial barriers, bringing people together. In BJJ, racism, sexism, nationalism and the likes are virtually nonexistent, because people are used to rolling with all kinds of partners. In addition, sometimes, BJJ can be promoted in a humorous way and still result with friendship and overcoming of political issues. Take Jew Jitsu as an example.

Although some may consider it politically incorrect, the term Jew Jitsu is by no means derogatory. Not intentionally, at the very least. Despite some mockery and humor on the subject, there is a project worth mentioning that falls under this category. But before we take a look at the serious side, let’s have some fun and piss off social justice warriors.

The Funny Side Of Jew Jitsu

One Google search of the term Jew Jitsu and what pops up is a certain book title among the first few results. Jew Jitsu: The Hebrew hands of fury is a humor book depicting the ancient martial art of Jew Jitsu. According to the authors, there is no defense against this vicious art. It claims to strike fear in the hearts of those who mess with Kosher kids. It gets even cooler, as the weapon of choice for Jew Jitsu are throwing stars of David. 😀

The book actually has good reviews and is really accepted amongst the Jewish community. So before everyone loses their head about it, maybe try and read it before judging the title.

Famous American comedian, Adama Carolla has a bit regarding Jew Jitsu, although in a different manner. According to him, the principles are the same as in BJJ. It is just the context it is used in, that is different. Check it out:

We want to hear your JEW-Jitsu stories – times when your family or friends have downplayed your accomplishments. Call at 1:30 pm PT! 877-564-2326. (Video has audio)

In terms of spreading the true Jiu-Jitsu message of understanding and compassion, here’s the incredible story of Jew Jitsu at work. Namely, there is a Brazilian instructor with Jewish root, by the name of  Marcos Gorinstein, who has devoted to achieving a great cause through Jiu Jitsu. He currently resides in Jerusalem, Israel, where he uses the gentle art to bring together Jewish and Palestinian kids.

Jerusalem’s west and east parts are divided by a border, marking the territories of Israel with Cisjordan. This is the spot where Gorenstein has opened a BJJ academy. The idea behind the undertaking is to use the sport to unite children and teenagers of Palestine and Israel. The location of the academy is in a volatile region where kids are growing up with violence and aggression.

According to Gorinstein: “The acceptance of these children, in getting to know the other side, is a very brave act. They can be seen in a bad way by the people around them“.

So far this project has yielded great results despite attempts for sabotage. It is a perfect example of how Jiu-Jitsu, or, even better, Jew Jitsu can lead to positive things. Check out Gorenstein’s message and spread the word of this impressive project. Also, remember, that not every use of a term deemed derogatory is actually such and humor is also a tool to spread the Gentle art even further among communities.

Stop lying to Women about Self Defense and Surviving Violent Attacks