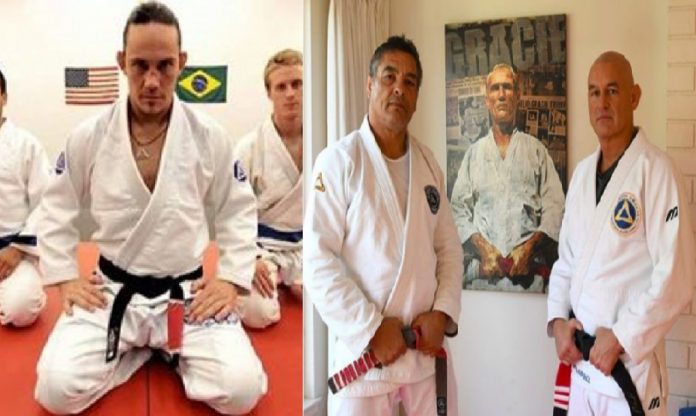 A few days ago we were about Rickson Gracie Black Belt David Arnebeck of being sentenced to prison for molesting a 15-year-old girl. The incident happened in 2013 and that wasn’t his only incident. In 1996, according to court orders, Arnebeck was convicted of a prostitution-related misdemeanor in Minneapolis. You can check everything about it in an article below:

The moral problem of the story is that David Arnebeck continued teaching kids in his three academies and, obviously, Rickson doesn’t care for that. A few days ago David Arnebeck posted a picture of him with Rickson at Rickson’s place what was enough for Rickson Gracie Black Belts to start calling him out.

It first started with Brandon Hetzler:

The story about David Arnebeck received so many negative comments from other Rickson’s Black Belts like Pedro Sauer, Henry Akins and others…

Henry Akins made a post on his Facebook profile:as a response to Brandon Hetzlers revealing the truth about Rickson training with convicted child molester David Arnebeck.

“Thank you Brandon Hetzler for bringing attention to this very serious issue. As we are learning now from Hollywood, silence only perpetuates the problem and makes us complicit. I was completely shocked, angered and very much disappointed to see this, especially because I brought this issue to the attention of the JJGF 2 years ago when Tony Pacenski was still involved.”

Akins received the reply from David Arnebeck himself- Arnebeck just posted a link to his homepage. The name of the article is “The Truth” where Arnebeck explains what really happened there. He also calls everything about this story a “defamation of him”. David Wrote:

“Hello. For those choosing to support or engage in defamation you may want to know the actual facts… http://davidarnebeck.com/truth/

It didn’t stop there as Henry Akins continued to call David out:

Henry Akins: “Hi David, I don’t think anyone is trying to engage in defamation. I think what you were accused of is deemed as a very serious issue among those in the Jiu-Jitsu community. What’s been posted comes from this article from the Star Tribune
http://m.startribune.com/metro-martial-arts…/221211121/

If it is in fact defamation, have you sued them and asked that the article be removed?

Also from your “truth” page which was obviously created by your defense. If there was so much evidence showing the girl had lied, why take a plea to such a serious offense?

Also apparently this statement came from your defense:
Sicoli said Arnebeck entered what is called a “Norgaard plea,” explaining that his client “was too drunk to remember what happened.” Arnebeck’s plea means that he doesn’t not admit to committing the act but acknowledges that prosecutors have enough evidence to convict him.

So I guess the circumstances around the issue are quite confusing. Why take a plea when there was so much evidence the girl was lying and why would your defense make that statement. And if the Star Tribune has in fact engaged in defamation how come they have not been sued and you ask that the article be removed?”

If you wonder if Rickson knew about David Arnebeck’s child molesting past it’s clear that Rickson knew everything about it. Two years ago Brandon Hetzler told Rickson and JJGF (Jiu Jitsu Global federation) about Arnebecks past, but no one seemed to worry about it.

“Sadly Rickson knew about this incident for years. In fact, I personally sent Rickson and Tony Pacenski (who was running the JJGF) emails regarding David Arnebeck two years ago. I tried to do this in a private manner and I sent them the articles and the facts. They both said nothing was gonna be done about it. I then called Rickson Personally and explained it to him. Rickson said he already talked to David and he beileives him and he wasn’t going to do anything about it. At that point I asked to be removed from the JJGF as I wanted no part of that. Then recently I saw the picture of David Arnebeck doing a private lesson with Rickson at his house. This really upset me and I knew that I needed to bring this to the public.
I hope that Rickson just talked with David and believed him without checking the facts.
I hope that if Rickson sees the actual facts he will do what is right.
Maybe the BJJ community as a whole can come together and help Rickson to see the seriousness of this matter.”

Until now Rickson still didn’t comment on anything. And according to Ty Gay Rickson’s instagram profile is deleting all negative comments.

Ty Gay is the latest Gracie Black Belt who accuses Rickson for supporting Child Molester David Arnebeck. You can check Ty Gay’s video below where Ty Gay talks to Rickson:

“let’s not ever allow people that have been convicted of prostitution or touching kids, around the mat. Can we just do that? Is that too much to ask?
You couldn’t pay me enough to let that dude walk in my house.
Please set me straight because I am crushed and right now, you seem like a fraud. And this David guy, shame on you!“

Well, at least something is clear in this story. Rickson knew about David but he didn’t do anything about it. He continued to train with David and even putting pictures with him. We’re all still waiting for Rickson’s response on this matter and we believe it’s only about the time when Rickson will make a statement. So, stay tuned!