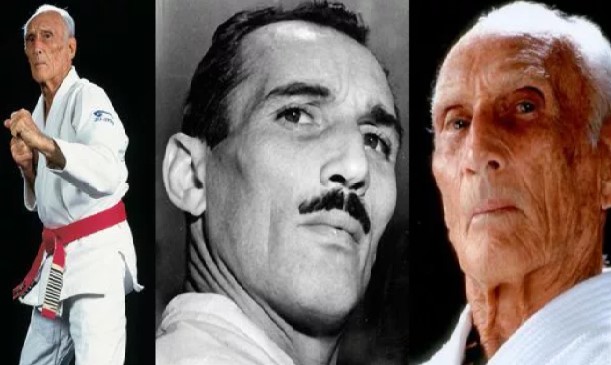 Back in 2001, Helio gave an interview for Brazilian Version of Playboy. It’s probably the most interesting interview in the history of Jiu-Jitsu.

In this article, we bring you the most interesting stuff that Helio said about himself when he was young, his family origins, his sons, his way of practicing sex, and a lot more… so, enjoy!

Helio About his Adolescence Age

Helio admitted that he had a bad temper in his adolescence. He wasn’t afraid of challenging anyone into a fight and he would approach people on the street asking them if they were fags when they would look at him strangely. But, once, when one guy trashed him badly he was afraid of confronting him. Helio was afraid and wasn’t feeling ready to fight the guy. He found out that being brave and being a thug are two different things. He was teaching that stuff in his classes after that.

Helio thinks that being strong isn’t necessary for being a good fighter. He says that it’s all about leverage and technique. He backs it up with a statement of him being able to take down anyone with one finger even at his age. And in 2001 when his interview aired he was 88 years old.

The Ultimate Fighting is the Invention of Gracie Family

Helio said that The Ultimate Fight (MMA) was the invention of his son Rorion. He explains that Rorion was looking for the best and the most effective ways of fighting so he created Ultimate Fighting. He also mentioned his son Royce who was unbeaten at the time of the interview and he backs up his theory with Royce’s success.

Helio’s great grandfather, James Gracie, was a Scottish who moved to Brazil after a misunderstanding with the Scottish government. James’ son and Helio’s Grandfather, Pedro was a banker in Rio De Janeiro and he had 18 children including Helios father Gastao.
Gastao Gracie had 5 sons, Carlos, Oswaldo, Gastao Jr., Jorge, and Helio, and 3 daughters, Mary, Helena, and Ilka. After the death of Helio’s Grand Father, Pedro, they left Belem and came to Rio.

Helio’s Brother Carlos died at the age of 94 in 1995. and he was taught by Mitsuyo Maeda, a Japanese teacher who was also known as Conde Koma. As Helio was the younger brother he wasn’t old enough to train when Maeda was teaching his brother Carlos. Even though Helio was considering his brother Carlos his “second father” he wasn’t taking lessons from him also. The main reason for that is because he suffered from dizziness and fainting while he was a student at the College Diocesano of Rio. Helio managed to convince his mother to let him leave the school just to start learning Jiu-Jitsu from him. 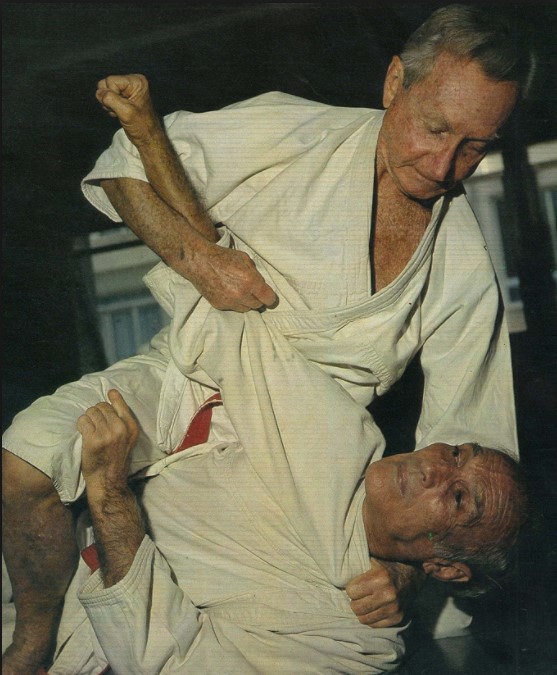 Helio’s Fights and Debut in the Ring

Helio was 17-yr-old when he fought the Brazilian Boxing Champion. He was able to win in 30 seconds by taking him on the ground, mounting, and applying an arm-lock.
One of Helio’s interesting fights was when he was 37 and challenged by a Japanese martial artist. Helio described that match as very tough for him. After the first round of 20 minutes, Helio has fainted. His brother gave him ammonia to smell so he recuperated in the 2nd and 3rd rounds. Helio had a Japanese fighter and a bad position, but the belt saved him. For the next two rounds, the Japanese fighter was just running away from Helio. He didn’t win this one but that fight was something that made him famous.

Helio About his Street Fights

Helio told a story of his Brother Carlos throwing a piece of bread on a seller of chickens. It’s meant to be a prank, but the seller got annoyed so Carlos sent Helio to deal with the chicken seller. Helio went down and choked a guy unconscious saying that when the guy woke up, he didn’t remember anything that had happened.
Helio also mentioned a story about a taxi driver blocking his way so he also choked him out and left him sleeping on the sidewalk. And a story about the truck driver. Helio also put him to sleep in RIO for wanting to fight him.
But Helio is also saying that he was never a street fighter but a ring fighter.

Helio said that Manoel Ruffini was talking around that he will prove to the world that Gracies are nothing. After Helio heard that he showed up at Tennis Club Tijuca in Rio and told to Manoel that he came to answer the declaration that Manoel made.
Manoel tried to punch Helio, but Helio took him down and “gave” him two fractures of his head and a broken clavicle. Blood was spurting around.
Helio admits that it was foolish of him and he would never do it again.
After that Helio was sentenced to 2 and a half years in detention.
He was in jail for only 2 hours until the court confirmed his sentence.

As Ryan was accused of beating up a man and stabbing someone in Rio De Janeiro in a nightclub and accused of attempted murder and was arrested and put in Jail, Helio didn’t have anything to add to that. He just said that his children have never been mixed up in any activities outside of the law.

Helio about Sex and his Sex Life

Helio said that he never had sex with a woman without the purpose of reproduction. He also taught his sons and grandsons.
He’s sure that he could’ve slept with any woman in Brazil as he was a celebrity so, all the young girls were interested in him. After some women would try to get to him really hard he would ask them if they’re willing to have his children and that would stop them.

Helio said that he learned to control his will for sex from his brother Carlos who was a spiritualist.
He also thinks that sex is just an unnecessary expenditure of energy and that the worst thing is to have sex without fulfilling nature’s purpose.

Helio also mentioned his sister who was a nun saying that he can’t understand her and call her. He thinks that a woman should have a child to complete her mission on the earth.

Helio said that he was never used condoms and he taught his sons not to also. He’s sure that his sons don’t use condoms.
He’s not afraid of AIDS for him or his sons as he’s sure they’re not having sex with anyone.
And he thinks that people who are willing to have sex with anyone are nothing more than dogs.

Helio About his Wives

He was married to his first wife for 50 years. Her name was Margarida and he had three sons with her. Rorion, Relson, and Rickson. When his first wife Margarida died he married his second wife Vera. She was 32 years younger than him. He had six more children with her. He said he does not type of a guy who loves women.

Helio thinks that it’s easier to teach stupid students because smart students think too much before executing the technique. He thinks that smart students end up lost and can’t function while stupid students just do it. He said that he wants to give his students good reflexes.
He also said that the problem with smart students is that when they learn the technique they’ll want to do it their way and not the way he taught them, so they will do everything wrong.
Helio thinks that a baby, young girl, or idiot is going to learn techniques much faster without asking questions.
Helio explains this theory by saying that Jiu-Jitsu is something for the subconscious, not for consciousness.

Helio About women who can do more and feminine independence

Helio thinks that strong women are a product of a weak men. For him, lazy and cowardly individuals with weak personalities are the ones who like independent women. In case women actually have no choice but to be independent. He thinks that nature did not create men and women by mistake, but for each one to be a missing part of another. The men should take care of a woman and women should take care of children.

At the time of the interview, Helio said that Vitor is a beginner in Jiu-Jitsu and that he only knows how to fight with rules.
He said that Vitor Belfort was talking bad about his son Royce and he called Vitor to set up a challenge against Royce. Vitor replied to him that he only fights for the money so the fight could never happen as that wasn’t Helio’s style.

What’s the Secret of Helio’s long life and Health

Helio said that he never had bad habits. He was never drinking or smoking or snacking between meals. He’s eating fish, cold cheese, fruits, and legumes. He eats bread only once a day. He doesn’t mix series… You can read everything about Helios Diet HERE
He also said that he never had sex more than it was necessary for reproduction because nature is not stupid.