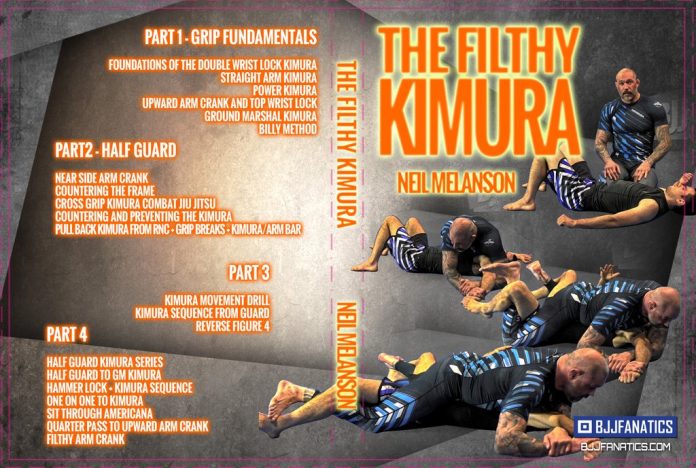 It is official – there are too many DVDs to effectively watch and learn from until the new year. 2018 has been all kinds of crazy in the ever-growing world of BJJ instructionals. Luckily, the increased quantity of instructional DVDs did not dilute the quality at all. A huge portion of the content in all DVDs that surfaced in 2018 is top-notch. A big reason for this is the choice of instructors that feature in each of them. A great example is Neil Melanson who took 2018 by a storm. The much sought-after coach released a bunch of top-class grappling DVDs this year. The Filthy Kimura DVD is his latest, and definitely one of the DVDs you won’t want to miss out on.

Paying the bills, drooling over new Gis and ending up buying a Neil Melanson DVD. I think this about sums up my bi-monthly activities. The world-class coach has certainly been busy in front of the camera lately. Neil has a whole collection of high-level ultra-useful BJJ DVDs out. And he doesn’t seem to know where the break is, much to our pleasure. His latest installment, though, caught me a bit by surprise. I had no idea it was even in the making, and the subject is something that takes Neil into different territory. So far, he displayed his love of chokes in each and every one of his releases. His latest, however, is all about breaking arms, in as many ways as possible. Given his catch wrestling background, the Filthy Kimura DVD thoroughly deserves its name.

The Kimura is one of those submissions that people tend to discard as they gain more grappling experience. While it is taught early, it is by no means just a move for beginners. The Kimura offers as much variety as any submission, if not more. It is the best tool to teach people that submissions are also positions of control, not just simple moves. We all know by now that we can go in many different directions from a Kimura. What we didn’t know are some unexplored areas of this bent arm lock. Who better than Neil Melanson to give you a different taste of a Jiu-Jitsu classic? Time to get your hands dirty with the Filthy Kimura DVD!

Contents hide
Neil Melanson DVDs – What’s Not To Like?
The Filthy Kimura DVD Review:
#1 All About The Grips
#2 Half Guard Setups
#3 Going Deep
#4 Top Position Kimuras

Neil Melanson is the man who does everything differently. And it works, in some cases even better than you’d expect! Neil doesn’t have formal grappling education, with belts lineage, etc. However, he has learned everything there is from different sources in the grappling community. And by sources, I mean grappling legends. His blend of grappling is one of BJJ, catch wrestling, Judo, all with a sprinkle of Sambo. You could say he is a grappling specialist.

Neil is much like a modern-day Bruce Lee, only focused exclusively on grappling. he likes to train a lot, and discover what actually works. Being the grappling coach of world-class MMA champions helps as well. As a catch wrestler, Neil doesn’t like to dwell on moves that might work. For him, simple is best, and the more painful it is, the happier he is going to be. Throw in some high-level understanding of Brazilian Jiu-Jitsu in there and you’ve got a winning formula!

The Filthy Kimura DVD hits the spot perfectly. It addresses a common subject in BJJ, from an uncommon perspective. As usual, Neil’s take on the subject of his DVDs is different than what you’d expect. It’s not just how to finish a Kimura from different positions. Neil uses every opportunity to advance within the submission itself, which is something others rarely address. It is simply an instructional that every grappler needs, regardless of the belt, experience or Gi/No-Gi preference.

Fitting the Kimura with Neil Melanson is not such a hard thing to do. After all, the Kimura is one of the staples of catch wrestling as well, known as the double wrist lock. While very versatile and often used in Jiu-Jitsu, there are “darker” aspects of the submission that still haven’t made their way into BJJ. Until now. The Filthy Kimura DVD by Neil Melanson is the bridge between the Kimura we know in BJJ and all the other viable Kimura options available to grapplers.

As with his previous instructionals, Neil likes to keep things simple and painful. He uses setups and positions that ensure there’s a minimum risk while you have a high percentage of success. He also goes into as much detail as humanly possible and doesn’t waste any time. As I said, a classic Neil Melanson DVD.

#1 All About The Grips

To get a Kimura, you need a figure four configuration on one of the opponent’ arms and a monkey grip. That is what we all know to look for. Well, in a grip-placement sense, there is a lot more to it. Like nobody before, Neil Melanson dedicates the first volume of his Filthy Kimura DVD to the science of grips behind the submission/position.

Even in the very first chapter, he refers to the catch wrestling aspect of it, calling it the double wrist lock Kimura. While he does share some key details on the bent arm submission we all associate with the Kimura, he also goes way beyond that. He offers awesome ways of finishing the straight arm Kimura, as well as a power finish when nothing else gets the job done. And, despite the name, you won’t actually need a lot of power and strength to finish it. He also goes into ground marshall setups, which include his own wicked brand of a closed guard.

If there’s anything more common than a Kimura from bottom half guard, it has to be top half guard Kimuras. However, Neil starts with the bottom. The second volume of the Filthy Kimura DVD opens up with an arm crank submission that is completely new for BJJ guys. It is a high percentage move that’ll work like a charm for you, guaranteed.

The key moment from this volume, for me at least, was the concept of dealing with frames. You’ll have no more trouble countering any frame your opponents might try to establish. Also, for all you combat Jiu-Jitsu lovers out there, there’s a very cool way to get the Kimura with a really cool grip variation. there’s also some Kimura defense thrown in there.

The volume wraps up with a very nice sequence that involves attacking from the back. It starts with a rear-naked choke setup, that slowly morphs into a Kimura/armbar attack.

The third volume is a true representative of a Neil Melanson DVD. It has a total of three chapters and a running time of over an hour. Neil spends a huge amount of time on crucial details that make or break the moves. If there’s one thing you should learn from the Filthy Kimura DVD, it is the kimura movement drill from this volume. Make it a mandatory drill every class and you’ll become a Kimura machine.

There is also a really efficient Kimura sequence that Melanson does from the guard. It has a bunch of moves that perfectly complement each other. Furthermore, everything starts and finishes with the Kimura. The reverse figure 4 is also an awesome upgrade to a regular Kimura finish. It is going to take some practicing though because it won’t come naturally.

Finally, it is all about destroying people from the top. Once again, in usual Neil Melanson fashion, the final volume contains the craziest moves of the instructional. This volume a real Kimura lover’s dream. Form hammerlocks, through one arm Kimuras, all the way to weird arm cranks, and an Americana on top of it all. There’s no way I can do all these moves justice, as nobody can portray them the way Neil does. So go and pick up the Filthy Kimura DVD by Neil Melanson and enjoy the terror of your opponents!