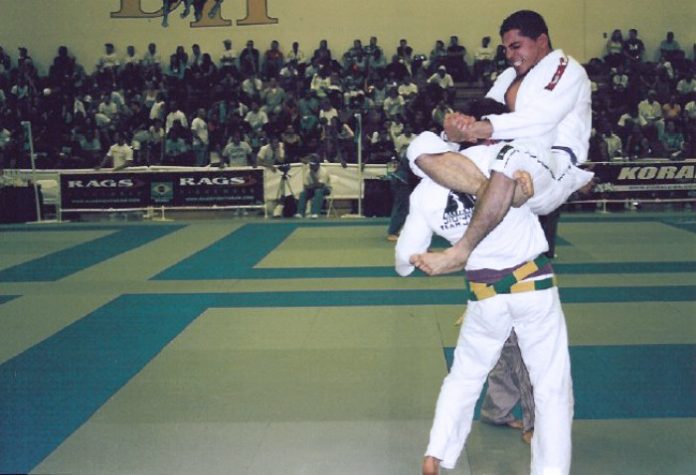 When you first witness a flying submission, your mind focuses on two main things. First, that it is a beyond cool, bad-ass move. Secondly, you ask yourself how you can learn to do that quickly and painlessly. While I completely agree with the first notion, the second is a bit more complicated. Learning anything in BJJ fast is hard. With flying submissions, it is plain impossible. I have to stress out here that if you choose to ignore this fact, you’ll more than likely end up really injured, or injure someone else. Learning a flying submission is a process just like learning break falls or armbars. You need to first be aware of, then understand and finally learn every step fo the move. Because, yes, flying submissions do have steps and setups a well.

The appeal of flying submissions is very easy to see. Who wouldn’t like to end a fight in a truly spectacular fashion? Flying submissions are probably the top of the hill when it comes to finishes. In essence, they’re shortcuts that remove most of what defines a BJJ match. With a flying submission, you jump (or fly) right to the end, skipping everything in the middle. While this is a nice shortcut to have as an option, like all shortcuts worth taking, it comes at a price. And, there’s no way for anyone to avoid paying it.

The price that I’m talking about comes in the form of a dilemma. If you really like to learn flying submissions you’ll need to spend a lot of time learning how to perform them correctly. Even more so, you’ll probably have to focus on just one flying move. The other end of the dilemma is ending up injured or giving up position in tournaments

Let’s look at flying submissions in a completely honest fashion. They’re difficult moves that beginners should not even think about attempting. Insufficient knowledge and understanding of what you’re trying to do can only result in a negative outcome. Most often, this is going to happen in the form of an injury.

Flying submissions area advanced moves because they have certain pre-requisites. For one, you need to actually know how the submission works in general. Actually, you need to be really good with a submission to even consider going for a flying setup. So if you are that set on learning of lying submission, master the basics first. Even as a beginner, choose your submission and start learning how it works and how to get there. Because flying is just one way of entering into a submission move.

The consequences of improperly executed flying submission can be really severe. Anything you do wrong in BJJ carries a certain risk, but flying changes the whole complexion of it. Whenever you’re “flying” your whole body is going to be without a base of support at one point in time. Unless you really know when, how and in which direction to “fly”, you’ll miss out on the move. As a result, you’ll most likely land in an awkward fashion that can leave you injured. best case scenario, you end up on your back, with nothing to show for it. And that is without even mentioning the injuries you could cause your partner/opponent.

The key thing to understand about flying submissions is that performing them is not different than performing any other move in BJJ. If you can comprehend that, you’ll be well on your way to mastering them. The best way to approach a flying submission move is in steps. There are three main steps you absolutely need to be aware of.

First and foremost, you need to be in constant contact with your opponent. If you try to just fly through the air to get them, you’ll never succeed. Gi or No-Gi, you need to have correct grips for the submission you’re chasing. This is called an anchor point. You have to hold to the anchor point from the moment you start “flying” to the moment you get the tap.

This is the second crucial step of every flying submission. If you want to fly you need to know how to take off. Logically, since your arms are anchoring you, your legs are going to be the power source. However, you need to know exactly where to place them in regard to the submission you’re chasing. Because going for a flying armbar and a flying guillotine are two very different things.

Whenever you go up, you’ll have to come down at one point. How you land has a lot to do with how you set up the previous two steps. If you’re anchored well and you chose the correct power source, landing shouldn’t be difficult as you should be in the submission position by then. Remember that when you’re landing, even if you’re not quite there with the submission, you have to stay tightly anchored to your opponent.

The guillotine is probably the easiest option to go for. There’s not much flying in this one, actually, and it is the most high-percentage flying submission of them all. The initial grips are quite simple for this one. You’ll need the same thing you need for a snap-down – arm and head control.

To set it up, you must bait your opponent to come low, so that when you fly, you can actually be on top. You need to pul the arm while you propel yourself forward and up, jumping off the mats. At the same time, use the snap-down to get their head down so that you can place the guillotine grip while you’re in the air. As you land, you’ll come down to your feet, forcing the opponent on their back. From there, you can look to finish from a top position or roll onto your back for a classic finish.

The flying armbar is next on the ladder of the difficulty of flying submissions. Here you’ll need to rely on your anchor grips a lot, especially with the Gi. Furthermore, your power source is going to change,m as you won’t be jumping off the ground with both feet.

Initial grips involve triceps control and a collar grip or head tie. The grip on the triceps needs to be with the thumb and forefinger facing yourself, which is not the usual way. This will enable you to transition into a finish with ease when the time comes. The leg that’s on the side of the collar grip/head tie needs to go on the opponent’s hips before you go airborne. Remember to be fast about it as it can give you away. The power source here is first the leg that’s on the ground and then the one on the hip. Depending on how tight you are, you can finish off your back, or from a top position after the landing.

Check out how Bernardo Faria approaches submission hunting. In his “High Percentage Submissions” DVD set you won’t see any submissions that do not work. What you learn from this instruction will serve you from white to black belt, both flying and from more conventional setups.

Getting a flying triangle requires experience, precise timing, and some dexterity. This is arguably the most difficult flying submission you can go for, that has a good percentage chance to work.

The anchor grips here are very specific. Both your hands must be on one of the opponent’s collar. Furthermore, it needs to be the collar on the side where your leg goes under the armpit. You’ll need to get your hips as far back as possible to both get a better boost and lower your opponent’s head. The goal is to pull your self with the anchor and go for a jump guard-like motion. Instead of placing both legs on the opponent’s hips, though, you’ll aim to throw one leg over their shoulder. From there you can land in a controlled manner to your back and proceed to finish a triangle choke.

The Art Of Linking BJJ Submissions Together