Filipe Esteves’ record is now 7-0 as an MMA fighter and won the Brazil MMA flyweight title last Saturday night in Salvador. But he’s making headlines for something else.

“I saw his situation, such a humble man, leaving Belem to Salvador to make only R$ 500 (around 120 dollars), and that touched me,”  He’s an experienced fighter who fought all around the world, has more than 30 fights, and his situation is just like many other athletes in Brazil, so I decided to make this move.” – Felipe Esteves told MMA Fighting.

Esteves thought he was set to make R$ 500 to show plus R$ 500 to win, but Brazil MMA director Americo Barros clarified that fighters were paid only a flat fee with no win bonus. Dias made 240 dollars Saturday night after Esteves donated his purse, but, in the end, went back home with only 19 dollars in his pocket after paying his bus ticket back home. 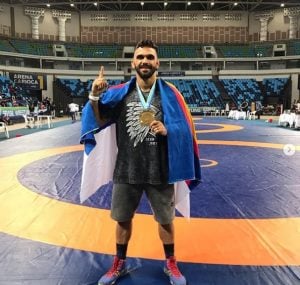 “I didn’t expect that,” said Dias, who fought three times under the Pancrase banner between 2015 and 2016 and dropped to 23-9 as an MMA fighter after losing via second-round submission. “I never expected I’d see an athlete do that, but Filipe has a great heart and is a humble person. He said he had made that decision even before the fight, win or lose, and I cried a lot.”

Dias, who left Belem last Wednesday to arrive in Salvador at 7 a.m. on Friday, had to cut weight during the bus trip. He knew that the promotion wasn’t going to pay for his transportation but still decided to take the fight.

Martinho Jambeiro, Brazil MMA’s executive director, told MMA Fighting that “our budget was very limited and we didn’t pay transportation to any fighter, but we put them in a nice hotel, which was one of our sponsors, and they went to one of the best restaurants in a fancy neighborhood. We took care of them. He even won a Brazil MMA gi.”

Jambeiro says their plan is to produce another event in November, this time focused only on women’s MMA and expects to have more money to pay for transportation next time.

What makes Esteves’ gesture even more incredible is the fact that he also is in desperate need for money. Esteves is a member of the Brazilian national wrestling team and was hoping to compete at next month’s World Wrestling Championships in Kazakhstan, but didn’t have enough money to pay for his travel expenses in time to sign in and compete in Asia — while the Brazilian wrestling confederation also struggles financially —, so he’s out of the tournament.

Esteves and his friend Cassio Oliveira, a fellow MMA fighter who is also a member of the Brazilian national team, created a crowdfunding campaign to pay for their expenses for upcoming wrestling tournaments that could earn them points and eventually spots in the 2020 Olympics in Tokyo. So far they’ve received $595 of the $7,386 they need.

“I’m balancing two different lives,” Esteves said. “It’s been a dream to fight at the Olympics, but also to be in the UFC. I have a 10-month-old daughter and I have to guarantee my future. An Olympic sport doesn’t change anyone’s lives financially, so MMA is my biggest goal right now.”

“He’ll be signed by the UFC really soon,” Dias said of his opponent. “He has a great heart.”