If you have been training Brazilian Jiu-Jitsu for more than a few months, you’ve seen the documentary “Choke” and you’ve heard the name, Rickson Gracie, at least once. Well, Rickson’s life work now gets a different platform. This time, he shares his own story, in his memoir titled “Breathe: A Life In Flow”. The book is scheduled for release in August 2021 and we can’t wait!

Rickson Gracie is the son of Helio Gracie, who has been credited as putting together what we today know as Brazilian Jiu-Jitsu. As Helio’s most talented son, Rickson was highly athletic and aggressive and has been the face of the Gracie family ever since he started competing. From the crazy stories in the old days of the Gracie challenges in Brazil,. to his MMA exploits, and of course, Gracie garage matches, the man is a real living legend in grappling and fighting circles.

Rickson’s journey was somewhat documented in “Choke”, a movie that focused on his MMA career. With a self-proclaimed record of 400-0. Rickson is definitely the best fighter of the Gracie family, and that includes his son Kron Gracie, who is currently on the UFC roster.

The thing with Rickson is that despite a lot of his efforts in MMA, Vale Tudo and Jiu-Jitsu are well known and documented, there are still a lot of mysteries surrounding the early days of Brazilian Jiu-Jitsu, especially when it comes to the period when he was going up the ranks in Brazil. To this day, some of the challenge matches which Rickson Gracie won have never been discussed, and most of the evidence is based on the few students that were there to witness them.

Rickson himself has been quite tight-lipped on the subject, not disclosing much about some of the fights everyone knows took place behind closed doors, with him ending up as the victor. There is even footage that has still not been released. It seems that through “Breathe: A Life In Flow”. Rickson Gracie will finally account for most of his life as a fighter of the Gracie family, including never before shared information on fights that the public is itching to learn about.

The memoir is available for pre-order through Amazon, with a release date set for August 10th. 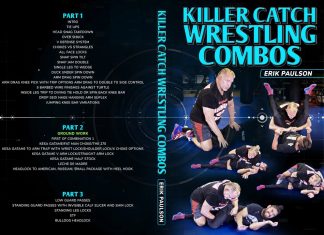 BJJ World - October 18, 2020 0
If you know your BJJ history (and I mean really know it) you’ll be aware that catch-wrestling had a huge role to play in...