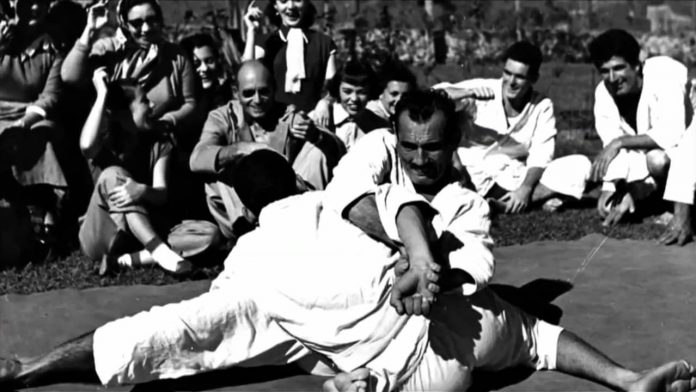 If you train Brazilian Jiu-Jitsu, you know about the Gracie family. Better, said, you’ve heard of them, as there’s too much to know, given how big and complicated that particular family is. What’s also common knowledge in the BJJ world is the story of the Gracie Challenge fights. There are notorious challenges that are the stuff of Jiu-Jitsu legends, up to a point. While some were recorded, there are only eyewitness reports of others, and they’re scratchy at best. What exactly were these Gracie Challenge matches? Let’s try and decode a piece of BJJ history today.

Most, if not all of the MMA and BJJ fans across the world have seen or heard of at least one Gracie challenge. The interesting thing about these challenges is that they’ve turned into a subculture within the BJJ culture itself. There were claims that the Gracies won all of their challenges, which, of course, is not true. That said, to this day, the Gracie Challenge exists, mostly in dojo storming incidents that usually do not end up for the non-BJJ person. Still, the Gracie Challenges brought about something much more important than just fighting and entertainment. They ended up being the perfect tool to announce Brazilian Jiu-Jitsu to the world and helped change the landscape of martial arts forever.

What Happened Before MMA?

As we all know, bare-knuckle, no-holds-barred matches were held in just about every spot around the world long before the emergence of MMA. Irish bare-knuckle boxing, catch-wrestling (up to a point), Vale Tudo and others were all forms of MMA. The one huge distinction is that there were absolutely no rules, so anything was fair. This is the exact platform the Gracie family used to promote the art of Brazilian Jiu-Jitsu.

The story of Jiu-Jitsu, in just a few sentences, is as follows. A Japanese Judoka, who spent a lot of time traveling the world and engaging in catch wrestling and NHB matches need up in Brazil. There, he thaught his trade to a bunch of students, one of whom was Carlos Gracie. Carlos then modified what he learned (which was a mixture of Japanese Ju-Jitsu, Judo and catch wrestling) and ended up with what we know today as Brazilian Jiu-Jitsu. He taught it to the rest of his family, turning all of them into formidable fighters, regardless of their size or strength.

After opening several schools in Rio, the Gracies decided they wanted to popularize their brand of Jiu-Jitsu. Their marketing strategy was nothing short of brilliant – issue challenge to everyone in local Brazilian newspapers. They invited people to try and win against Gracie Jiu-Jitsu, claiming they would beat everyone that showed up. They did, for the most part, and the Gracie Challenge was born.

The matches took place in a Vale Tudo (Brazilian term for NHB) matches. There were no time limits, rules, or referees. Most of the fights took place in gyms, although some made it to huge areas and a few even turned to massive brawls. Talk about marketing!

Taking The Gracie Challenge To America

Apart from calming they could beat everyone, the Gracie family members made sure they put smaller / lighter people in the fights, and that they wore Gis whenever possible. Sounds familiar? If you know anything about the history of the UFC and MMA, you might recognize a pattern here. It is the exact format Rorion Gracie used to set up the first UFC, which was essentialy a Gracie Challenge at a whole different level than the Vale Tudo ones in Brazil.

Rorion Gracie, the eldest son of Helio, decided to visit the USA, and California in particular. Rorion spent some time in the USA and quickly found out that Gracie Jiu-Jitsu would thrive in America. After coming back to Brazil for a while, he finally moved to the US in the late 1970s, looking to establish Brazilian Jiu-Jitsu there. He did not find any martial arts schools that were open to giving him time on their mats, so he had to set his own academy up. He did so using a garage, giving birth to the famous Gracie Garage. There, he started teaching and soon got a solid number of students.

At the same time, Rorieon decided to use the Gracie Challenge his uncle Carlos successfully used in Brazil years before. So, he issued a challenge to any martial artist that would fight him. The rules were no referee, no time limits, and no gloves. Of course, Rorion beat everyone. Soon, he started recording these matches, which turned out to be a marketing masterstroke.

With the Gracie Challenge matches, Rorions’ academy took off and he had to call in reinforcements in the form of Rickson, Royler and Royce from Brazil,m who came along with the Machado brothers. They all helped open academies and held even more Gracie Challenge matches, solidifying BJJ as the toughest martial art out there. By the 90s, they were a real force to be reckoned with.

The very early fights in Brazil, those that brought the Gracie name to attention area largely unknown., They took place behind closed doors, mostly, and with only a few students watching along as spectators.

Out of Helio Gracie’s many matches, the one with Orlando Americo “Dudu” da Silva is worth mentioning. Dudu was a catch wrestler that was 20 kg heavier than Helio. Helio worked a lot form his guard, eventually getting to the feet and finishing Dudu with Capoeira kicks.

Rickson Gracie’s high profile match with Casemiro “Rei Zulu” Nascimiento Martins was one of the early controversial Gracie Challenge matches. Zulu was a professional wrestler and Luta Livre fighter with no formal martial arts training. TRickosn submitted Zulu via a rear-naked choke to win the match and the challenge. Ther rematch, requested by Zulut, turned into chaos. Zulu requested rule changes right before the match and then, both fighters used moves that were previously agreed upon as illegal. Rickson won the second match as well.

Another of Rickon’s notable Gracie challenge matches is the one with Hugo Duarte. Duarte wanted money to fight Rickson, but Gracie decided to attack him on the beach, in front of his students and Duarte had to fight. Rickson won via ground and pound, prompting Duarte to storm Rickosn’s dojo later on which led to a full-blown riot with police eventually intervening.
Yoji Anjo storming Rickon’s gym was another mysterious event until la while ago, when Rickson gave account and video, of what happened. Anjo went in the match strong, but Rickson eventually won, once again via a rear-naked choke.

Renzo Gracie, Who is one more entertaining Gracie family member also had his fair share of controversial Gracie Challenge matches. His biggest one was against Luta Livre legend Eugenio Tadeu. The match ended up with a massive brawl, that also had shots fired and the arena completely demolished. The result was a ban for MMA/Vale Tudo in Rio in the next ten years.

You can see some of the Gracie Challenge matches videos at the end of this article.

As I said before, the Gracies family did not win every challenge match, but they did emerge victorious from most of them. They seemed to have a lot of success after moving to the states. Still, the early Vale Tudo matches were really hard-fought victories, much to the merit of the Gracies.

One of the earliest legendary challenges is the high profile match between Helio Gracie and Masahiko Kimura. The Judoka accepted the challenge, looking to avenge the performance of teammate Yukio Kato that drew with Helio in an earlier match. Kimura went on to break Helio’s arm with the move that today bears his name. Helio, to his credit, did not tap and his brother Carlos had to throw in the towel.

Another high profile loss of Helio’s was that against his former student Valdemar Santana, who challenged Gracie. Santana, a lot younger and heavier than Helio, won the match. It was almost four hours long with Vale Tudo rules Santana got the win via a soccer kick that knocked Helio unconscious.

Another name that’s notorious for beating the Gracies over and over again, albeit in more controlled fighting conditions is Kazushi Sakuraba. Dubbed “The Gracie Hunter”, Sakuraba submitted Royler becoming the second Japanese fighter to beat a Gracie after Kimura. Royce attempted to avenge the loss but ended up losing himself after an hour and a half long bout. He then went on to break Renzo Gracie’s arm, solidifying his legacy as the Gracie family’s worst nightmare.

In a curious case of events, Gene LeBell also almost became a part of the Gracie Challenge matches. Challenged by the Gracies, LeBell accepted, demanding to fight Helio rather than Rickson. After all, the Judoka was already 60 at the time. Helio accepted, demanding the fight take place at 140 lbs, which was impossible for Gene to accomplish. As a result, the challenge never materialized.

Check out some of the matches in the videos at the end of the article.

What the Gracie Challenge matches accomplished was popularizing Brazilian Jiu-Jitsu within the martial arts community. At a time when Eastern striking martial arts were the only thing people associated with grappling, this was quite the feat to achieve. There was actually no better way of marketing how effective BJJ is than fighting anyone and everyone. And yes, the result did not matter as the Gracies’ main goal was to gain more students and spread BJJ around the world. Suffice to say, they succeeded. 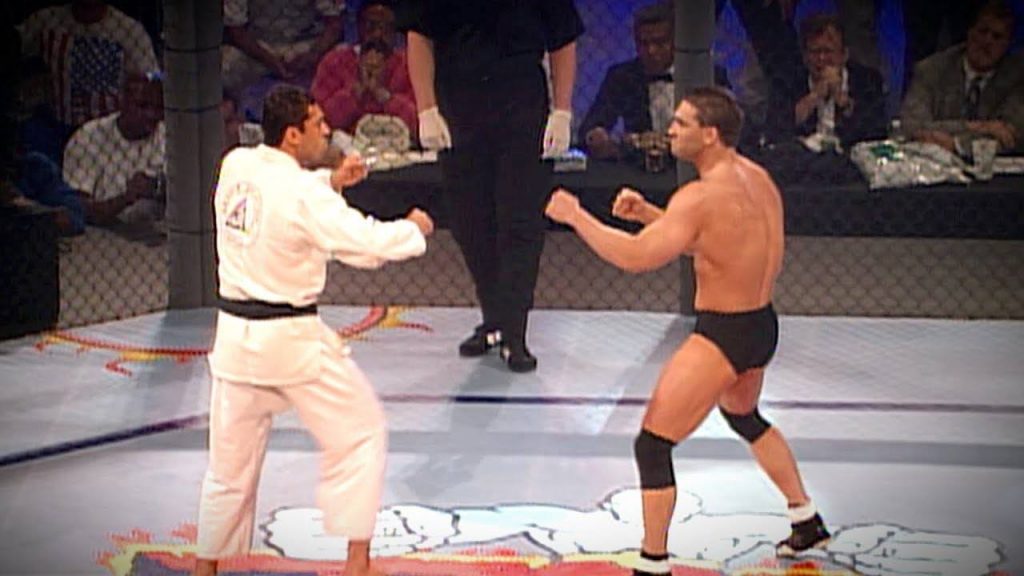 In the process, the American edition of Gracie Challenge matches ended up giving birth to something else – modern MMA. Through the formation of the UFC as the biggest Gracie Challenge stage up to date, the Gracies managed to take their challenges to the TV screens, with the UFC being televised. Of course, the organization had a period of difficulties due to the no rules format. However, that later changed, giving birth to MMA in the process. And we can’t really imagine the world of combat sports and martial arts without MMA today, can we?

Another thing that is really fascinating is the Gracie Challenge matches still happen nowadays form time to time. Granted, they do not feature Gracies most of the time, but the story is the same. People storm dojos, whether they’re bodybuilders, or martial artists, calming they can beat the resident BJJ black belt. While these affairs a much more civil nowadays, the outcome is still the same. Jiu-Jitsu still emerges victorious in most of the cases. Plus, it makes up for great entertainment.

The Gracie Challenge matches, like them or not, helped BJJ reach far more people than it would have otherwise. In the process, a whole new combat sport was born as well – MMA. What really happened behind closed doors at most of the early matches, both in Brazil and the USA is hard to know. However, according to the video evidence, these challenges were not pretty events at all. This proves the BJJ, in its inceptions, was very effective in a self-defense scenario. This is the somewhat lost aspect of BJJ nowadays. Who knows, perhaps we should bring back occasional Gracie Challenge matches for that reason only. What do you think?