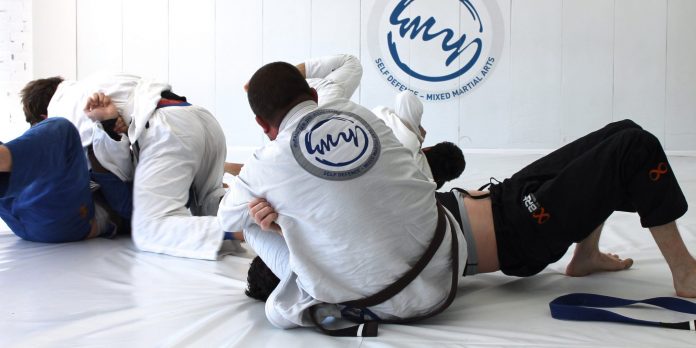 Sparring in BJJ, or rolling as it is referred to, is the most fun part of training. Apart from tournaments, MMA or a self-defense scenario, this is where people get to try out the stuff they’ve learned. The nature of Brazilian Jiu-Jitsu allows for both the mind and body to be engaged during rolling. Especially at the advanced levels, BJJ rolls often turn into elaborate chess matches. Not even the smallest move is without potential dire consequence for one of the two people engaged. In fact, rolling is so fun, that most academies in the world have a dedicated day for it. It is the BJJ open mat. But was it originally intended to be a couple of hours long sparring session?

A BJJ open mat is the one day of the week where there is no structured class. By that, I mean literally no structure. Students get to warm up themselves and there’s no demonstration of techniques. In some schools, there aren’t even rounds on the timer. An open mat day is all about rolling, period. Well, no, as this is not the original intention. The basic concept of open mat did include rolling, but not as the sole focus of the class. Let’s take a look at the idea behind the BJJ open mat day before we explore different approaches for students of different skill levels.

The Point Of The BJJ Open Mat Day

In essence, the point of the BJJ open mat is to expand your game. Then again, most people perceive rolling as the only way to do so. Nevertheless, this approach is not the correct one. The time during open mat should be used wisely, with progress as the main objective. Despite what most people think, rolling is not directly proportional to progress. In fact, it often leads to erroneous habits that get exposed in tournaments.

First and foremost, the open mat is a place for improving your game. A big part of that is talking to your instructors. Whether it is asking questions, developing competetive strategies or a general game plan, an open mat is the place for Q&A. Instructors, on the other hand, need to be at students’ disposal during open mats, in cases of questions regarding technique.

Another huge benefit that is often overlooked is the time to drill. Most open mat sessions last at least a couple of hours, often more. This offers plentiful time that can be put towards drilling favorite moves, new stuff or polishing up things you’re not good at. We already covered the importance of drilling before.  Regular classes can only dedicate a small part of class towards drilling. Open mat is where you get to put the reps in.

Competition preparation is one more aspect that can be addressed at a BJJ open mat. It is a great opportunity to discuss strategy with your instructors. A student can also discover areas of the game that need improvement and focus on those. Ask your instructor for an opinion, devise a strategy and get drilling. There’ll still be enough time to roll.

You could even do some extra conditioning at open mat, but who wants to do pushups when they can roll, right? 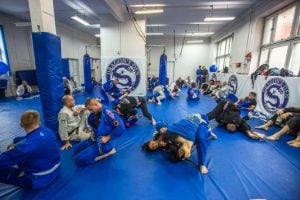 From a skill level standpoint, not everyone should approach open mat in the same manner. Beginners have a lot of fundamental things to learn. They cannot grasp most of the fundamentals while rolling at full speed. In turn, there is a need for a much more structured approach.

Seeing as movement is one of the top goals for a beginner, it should also be a huge part of open mat sessions. It is advisable for new students to utilize solo drills based on movement, if not separately than as part of their warm-up. The body needs to adapt to patterns like shrimping, bridging and tumbling.

More advanced beginners that have a grasp on movement can engage in partner drills. The closed guard is a top priority for white and blue belts. So are a few passes from different situations and a takedown or two. Instructor supervision is advisable, but not necessary. Just make sure you get as many reps as possible.

The Q&A we mentioned before is arguably way more important for new students, as opposed to more advanced ones. The problem is that they’ll ask about everything, from basic sweeps to flying Gogoplatas. It is the instructor’s task to primarily point their questions in the right direction, before providing them with appropriate answers.

Of course, white belts are still going to want to roll. Despite their burning desire to get smashed, it is a good idea to do a few position sparring rounds first. Ideally, they’d be in line with the drills done earlier. That way, students can test the level of their newly acquired skill in a controlled resistance environment. And yes, they do get to roll at the end. 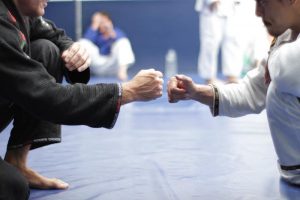 Open Mat For The Advanced student

As with the beginners, the advanced students (yup, even black belts) should partake in drilling during BJJ open mat. Of course, with a much different approach to that of white belts. Higher resistance partner drills or longer scenarios should be the focus of the session. It’ll allow students to perfect finer technical aspects like angles, positioning, and pressure. A lot of takedown drills are mandatory and, despite current practice, should not be skipped.

For competitors, an open mat is a time to re-discuss strategy over and over again. A good rule of thumb is to go over it at the start of every open mat. That way, you’ll know what to drill, how intensely and what you should improve. again, the strategy has to encompass everything, from standing tactics to counterfeiting on the ground.

During rolling, higher belts need to aim to roll with every belt level on the mats. Even so, all rolls shouldn’t be approached the same. Whenever a higher belt rolls with a lower belt, the point is not to destroy the less skilled student. When a purple belt rolls with a white one, they should look to practice new things that are not a part of their game. All experimentation should begin against lower ranked opposition, before testing it out against your peers. This is a great way to develop aspects of the game that you’re not proficient at.

When a student rolls with equal or higher skilled partners, goals should adjust accordingly. Namely, same level partners offer a great insight into how effective a competition strategy is. Higher ranked partners are great for practicing defense and counter-fighting concepts.

Finally, flow rolling is a good way to get loose, practice transitioning and work up a sweat before all-out rolling.

9 Reasons Why You Are Annoying to Roll With