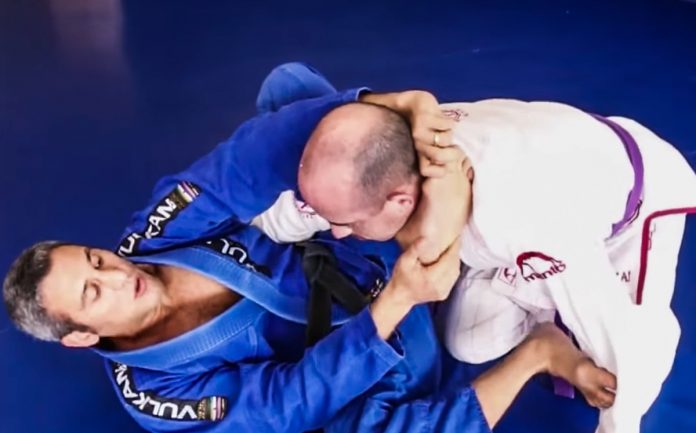 Whenever we think of flashy BJJ moves involving lots of flexibility, one name instinctively springs to mind. Eddie Bravo is the mad BJJ scientist who got famous back in the day for choking out Royler Gracie at ADCC. The smart cookie that he is, Bravo devoted himself to developing his own unique style. Out of the innovative high tech lab that is 10th Planet Jiu Jitsu came moves like the rubber guard, the lockdown, the truck and spiderweb. Oh, and the gogoplata. We can’t forget about the gogoplata.

One of the strangest moves in BJJ, the gogoplata is a choke done with the feet. Only it’s not as easy as standing over someone and putting a foot to their throat. At first glance, it seems like the person doing the choke is an Indian yogi guru, capable of turning themselves inside out. Such is the pretzeled-up position required to pull the choke off. However, it’s by all means an effective submission, and not at all difficult once you understand the concept behind it.

The Rise Of The Gogoplata

Although credited with fine tuning and popularizing the gogoplata, Eddie Bravo is not the founder of the move. Nino Schembri is the name credited with the invention of the gogoplata. Or so he claims to the very least. Already an omoplata wizard, Schembri developed the gogoplata as a result of his freakish flexibility. He introduced the world  to the unorthodox move in 2000, managing to pull ti off in competition in Sao Paulo.

Not shy of flexibility himself, Eddie Bravo “stole” the move from Schembri taking it to another level. Schembri performed the move as an extension of the omoplata, while Bravo did it from everywhere. Rubber guard, half guard, mount, even a holding position known as the gogo-clinch, Bravo keeps working on the move to this day.

As far as effectiveness is concerned, the move has been successfully used in both MMA and grappling competitions. Although not the most often witnessed submission, it is not as rare as one might think. Exactly 12 years ago, on New Year’s Eve 2006, Shinya Aoki submited Joachim Hansen to become the move’s pioneer in MMA. Aoki is the only fighter to pull off a mounted gogoplata in MMA as well. Perhaps the most famous use of the gogoplata in MMA is by Nick Diaz, when he choked out Takanori Gomi. Brad Imes also has a couple of gogoplata wins to his name.

Setting up the gogoplata

For those that are not in the mood to go all 10th Planet and look for rubber guard setups, the gogoplata is always there off an omoplata. From the omoplata position you just need to take the foot that is on top of the shoulder and move it under your opponent’s neck. From  there, the foot is in perfect position for a choke. Much like the arm-in guillotine, the gogoplata is an air choke as opposed to a blood one. Catching the fingers of the choking foot with your arm behind your opponent’s hand is usually more than enough to get the tap. However, if you’re up against a very resilient opponent, you can always use your other foot to push on the heel of the choking foot. No degree of resilience is going to help with that.

Eddie Bravo’s love child, the rubber guard, can also be seen as a variation of the omoplata. Bravo has gone a mile further, though, turning it into a position of impressive control. From there, a plethora of submissions are available, but none is as eye catching as the gogoplata. The angle of the rubber guard (the “New York” position in particular) is far superior to the omoplata set up. Check out the 10th Planet path to gogoplata, via the rubber guard, below:

The gogoplata can be sunk in from the mount position as well. This is probably the position that offers the most control, leading up to the choke. Again, Bravo has a whole system of getting to it, so be sure to check out his stuff on the subject. Just make sure you have one arm trapped with a tight overhook before going for the gogoplata. The mount entry takes a bit more practice, but the position is such, that you have easy follow-ups at your disposal, like armlocks and other chokes.

A Bottom Half Guard Surprise

Given that you have the required flexibility, the bottom of the half guard is another spot for hitting gogoplatas. When stuck in the over-under position of bottom half, it only takes a little bit of framing and shrimping to get your foot over. Once you’re in an omoplata-ish position, it’s easy to go for the kill.

Finally, do not be intimidated by the gogoplata’s flexibility requirements. Even regular people can hit the choke, as long as you learn the correct angles and leverage. One of the reasons the move is not often seen is because people lack the confidence to go for it. And, the only way to gain enough confidence in a move is by devoting time to it. So, drill the gogoplata, look for it while you roll and you’ll become an expert in no time!