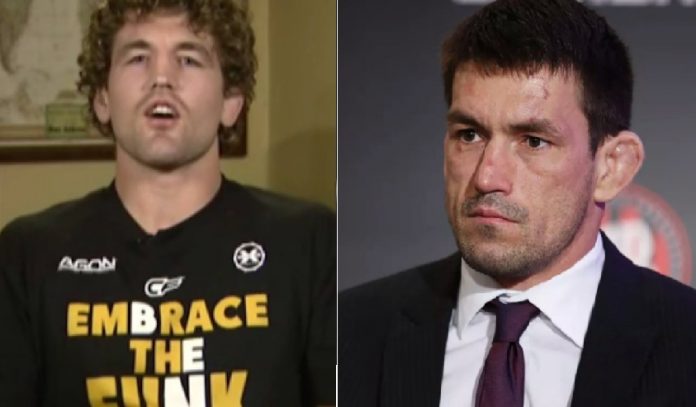 The rumor that Chael Sonnen claimed in his podcast is definitely true. Looks like Ben Askren Really promoted himself to a BJJ black belt.

Congrats to @Benaskren who was just promoted to Black Belt by undefeated World Champion, @Benaskren

It was very interesting in his Q&A time on reddit:

He was asked: “Was Chaels story about your black belt true? He said you essentially just declared yourself a black belt and challenged people to prove you don’t have the skills to be one.”

His answer was: “Yes”

When asked if anyone accepted his challenge he again gave simple answer: “No”

And he also didn’t have any nice words for Demian Maia:

He was asked: “why didn’t maia watch your tutorial videos before the Woodley fight? I felt some of your takedowns would have been effective.”

He said: “Maia is so basic. I had to imitate Maia in sparring and it was awful bc there was no creativity or ability to keep Tyron guessing what was coming.”

This could be really interesting in the future once the BJJ people starts to challenge him. Check the full Q&A with him HERE.

IF you want to check Ben Askren’s BJJ skills against one of the best, Marcelo Garcia, you can check it in a video below and tell us what you think in the comments.

Grandmaster with 12 Black Belts and 7th Degree in Grappling