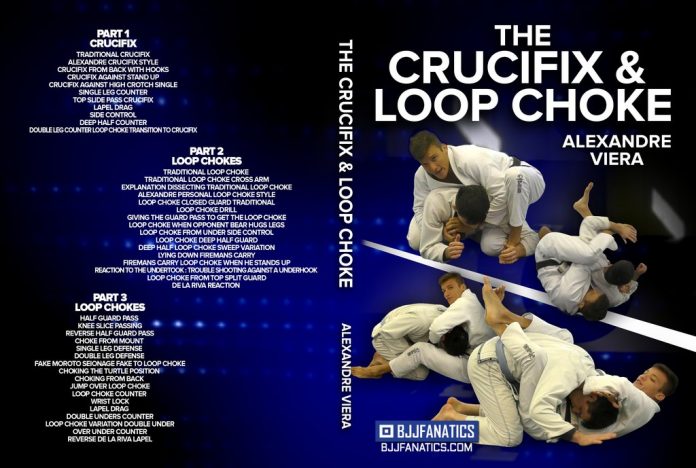 Not all chokes in BJJ are created the same. Some require patience and tactics in order to set up. Others are as sneaky as they get, and they catch people by surprise. The loop choke is one of those chokes that you can hit from an inferior position and finish everyone in a heartbeat. Now, there is a perfect resource for mastering it, thanks to one of the best in the world at loop choking people to sleep. The brand new Alexandre Vieira DVD is all about Crucifix and Loop chokes.

Imagine going for a fireman carry takedown on your opponent. You get it effortlessly and you manage to finish it with finesse and style. However, instead of getting past the dangerous legs once on the bottom, you decide to finish right then and there. What would be your weapon of choice? Since you already have a cross grip on the opponent’s lapel, why not hit a loop choke? Well, there’s no need to imagine this as there’s proof of Alexandre Vieira doing it live. And it went viral. Now, BJJ Fanatics brings us an Alexandre Vieira DVD set that is going to teach you all you need to know about getting the loop choke and crucifix from everywhere.

Alexandre Vieira is arguably the world’s best at getting loop chokes against high-level opponents. The Brazilian chose to specialize in an often underrated choke, resulting in unbelievable results. Now, you can also become a loop choke killer, thanks to the Alexandre Vieira DVD instructional “The Crucifix And Loop Choke”. Be warned, there are some crazy loop choke and crucifix secrets in there! If you’re ready to go straight into the deep, pick it u for a career-changing BJJ experience.

Speaking of crucifixes and loop chokes, here are some further resources for improving your attacks against the turtle, Mike Palladino’s “Killer Turtle Attacks” DVD is the perfect companion to Alexandre Vieira’s brand new DVD release. Get ’em both and dominate the mat!

Murilo Bustamante is a household name in terms of Brazilian Jiu-Jitsu black belts. The Carlson Gracie standout is the man behind the Brazilian Top Team and the driving force behind many top grapplers and fighters of today. One such star student of Bustamante is Alexandre Vieira.

Vieira is a top representative of the Brazilian Top Team and a very entertaining grappler. The lighting fast lightweight is world-famous for his loop choke finish of Tomoshige Sera at UAEJJF Abu Dhabi Grand Slam in 2017. His submission in Tokyo was heard around the world at a viral rate. What most people do not realize, is that this is just one in a long line of successful loop chokes by the Brazilian. What is rarely in the focus when Vieira’s name is mentioned is his prowess in the crucifix position as well.

Alexandre Vieira started training BJJ after originally picking up Capoeira. His immense talent brought him to  Paulo Maurício Strauch’s Academy, where he excelled, as expected. Along his BJJ journey, he also picked up kickboxing, thus becoming proficient in MMA. After one such fight, his opponent invited him to train at the Brazilian Top Team, which brought him to Bustamante. A brown belt at the time, it didn’t take Vieira much time to earn a black belt straight from Bustamante himself.

In all honesty, I had no idea what to expect from an Alexandre Vieira DVD. yes, the man is an amazing competitor and a true master of chokes. However, being a top-level competitor and a good coach is very different. Actually being a good coach does not guarantee you’ll end up releasing top-quality digital material either. Well, rest assure, Vieira knows what he is doing.

The DVD is all about Vieira’s favorite moves, the crucifix position, and loop choke attacks. Since his true signature move is the loop choke, he dedicates two out of three volumes to this technique. This leaves just one volume for the crucifix position, but Vieira makes the most of it. Each volume consists of more than a dozen chapters of carefully organized crucial information. There’s not one thing you can skip over as irrelevant.

The production is clean, with remarkable camera work and clearly audible sound. Alexandre’s style of explaining is also easy to follow. he likes to connect things, which for me is always the preferred manner of organizing DVD content. He also doesn’t hold back on the tricks that make his winning moves some of the most attractive in the world of grappling.

Kicking this Alexandre Vieira DVD off is one of BJJ’s most interesting positions – the Crucifix. We all know what the crucifix basically is and that’s exactly where Vieira starts off. However, you’ll soon discover that this “traditional” way of doing the crucifix is not what Vieira likes to do. He follows up on the traditional technique with his own version of the crucifix. Once you see it you’ll hardly ever go back to the traditional one, believe me.

As the volume progresses, Vieira goes on to explain his favorite ways of getting to the position. We all know that the crucifix is easy to obtain from the back, but Alexandre likes to be more versatile than that. he offers entries from standing moves like the high crotch as well as from guard passes. Since I am a big fan of the lapel drag, I found the crucifix setup from there particularly useful. What’s also cool is hunting for the crucifix as a deep half counter, although I still haven’t tried it.

Of course, in a completely original fashion, he also offers entry to the crucifix as a back up to a loop choke attempt. Not that you’re going to need any backups after you see the next two volumes of this Alexandre Vieira DVD.

Volumes three and four are dedicated to the elusive loop choke. Plenty of people tend to get this move wrong, especially at the highest levels. The devil, as always is in the details and nobody knows them better than Alexandre Vieira. Once again he begins by explaining the traditional way of setting up and finishing the loop choke. He goes really deep into it, dedicating the first third of the volume to dissecting the choke’s mechanics. Then, he moves on to demonstrate his own personal way of setting it up along with a cool drill to help you master it faster.

Going further Vieira starts demonstrating some high-level trickery. For example, he shows how to correctly give away the guard pass. OFfof that there are loop chokes flying left and right, mainly from inferior positions. Actually, with the loop choke, there are not many positions that remain inferior. Rounding off the volume is his fireman’s carry loop choke setup that made him an instant BJJ celebrity.

The final volume of the DVD set is all about getting the loop choke from top position. As far as guard passes go, there’s hardly a guard pass that’s not going to lead you straight into the choke. There are also great mount, standing, turtle and back control setups. Whatever your favorite position is, you’re going to find a loop choke setup for it here. DO not miss this wonderful release and get yours while they’re still in stock!