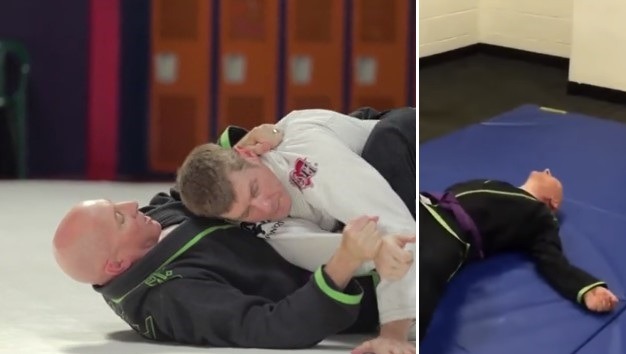 Maynard James Keenan, BJJ practitioner, and singer. “Puscifer”, “A Perfect Circle” and “I” legend is a long time practitioner of martial arts and Brazilian Jiu-Jitsu is the martial art he loves the most. He’s a purple belt right now and he let the world know about his love for BJJ and everything coming with it. In this interview, he tries to explain what BJJ really gives you and why it is one of the best martial arts to be trained at. Here is everything Maynard James Keenan said in this great interview that you can watch below. Also, you can see how he found out what Stockton Slap is in a hard way by Nate Diaz.

Brazilian Jiu-Jitsu is probably the hardest thing I’ve ever done in my life. It’s a long journey and very humiliating and you have to proceed in that manner. You have to accept that there is always someone better, more technical, faster, stronger. It’s just a wonderful journey that I would recommend to everyone.

Oxygen in the Brain in the brain is important for creativity and productivity so you have to be conscious and present on the mat to be successful. You can’t phone it in. If you’re snoozing your training partner is going to put you to the sleep.

When you’re coming to Brazilian Jiu-Jitsu you’re coming as a white belt and you don’t know anything. So, every day that you go to train BJJ, even though you’ll make some small progressions it’s about you digging in. It’s about you understanding exactly what humility smells like. It’s a pretty tough road from white belt to black belt. It’s a road that nobody can do except you. You have to put the time in, you have to progress and you have to do it. Nobody can do it for you. If you have that belt by the time you get to a black belt, you’ve earned it. There are no shortcuts.

Maynard James Keenan about his father and his wrestling days.

How Maynard James Keenan Discovered Jiu-Jitsu and His Goals

I discovered Jiu-Jitsu through Tim Alexander. He showed me the tapes of the old UFC’s and I found a gym near me. It was Rickson Gracie gym found in mid 90’s. When I found that place I came in and I just wanted to learn Jiu-Jitsu. I’ve been growing up as a wrestler and that was the skill set that I had a foundation as that my father gave me. When I woke in BJJ gym as a wrestler I found out that a lot of the stuff from wrestling is not applicable. I was like, I got this, and then I was out waking up questioning my self for how long I was out.

When you look at something like the UFC you have to understand that people operating in that circle are extremely gifted world-class athletes. Their body is in some way far above beyond an average person who does martial arts.

I’m not living in illusions that I’ll ever be in the octagon. What I do martial arts for is multiple things. It’s about personal growth and personal understanding and reflection. But also because it’s about the self-defense. The idea of any self-defense martial art is that if you’re in a situation where you end up having problems with some drunk idiot or someone is crazy you know how to defend your self.

But the chess part of it on the mat in the GI is very mentally stimulating. If you watch some of the top black belt guys competing it’s about half inches. They’re moving and making adjustments through half inches and you’re watching them trying to out chess each other six moves ahead to get to the checkmate. That really is gorgeous to watch

It’s boring for a lot of people watching UFC but for people who understand the art of BJJ watching those quarter-inches and half-inches going by is pretty amazing.

His Views on life and Success and What’s Really Important

I’ve seen a lot of my friends that get successful in a thing and they think they’re successful because of them. They feel like, I did that! But a lot of it can just be circumstances, accidental… A million variables came together and put you into the position where you’re successful and then they put their stick in a ground and think, I know what I’m doing.
Well, as soon as you say you know what you’re doing and you’re convinced that you know what you’re doing, you’re dead.
You have to grow because life is an absolute change in chaos and you have to be adaptable.

I think it’s important to point out to people that if you’re going to be a photographer, painter or anything else to do what feels right for you. Follow the combination of your head and your heart. Your intuition is important and your experience is the same or even more important. The balance of actual hard work and using your experience is very important and also understanding that you’re ON YOUR OWN. You have to understand that you’re alone and progress. When you reached one level tell yourself, ok I’ll reach another level now.

Be happy with what your decisions are. You’re on your own and you don’t owe anybody anything. And if you’re doing your job accurately enough and you’re expressing from your heart, your core, your experience, and your intuition other people are going to resonate with it. They’re going to get something out of it. Their day might go better because of your true and honest approach to what you’re doing. You’re gonna help other people, yourself and your family.

Also, at the end of the day, you have to understand that no one owes you anything just like you don’t owe anything to anyone. You’re just doing your work.

Funny Clip With Maynard Keenan James trying to find out what Stockton Slap is from one of the Stockton slap “inventors” Nate Diaz.

If you were ever watching Diaz brothers Nick and Nate in MMA and UFC you had to hear for the term Stockton Slap. It’s actually a “bitch-slapping” of your opponent in an MMA fight which Nick and Nate use regularly in their MMA fights.

In a video below Maynard James Keenan challenged Nate Diaz to show him what Stockton slap really is and he was “bitch-slapped” by Nate.