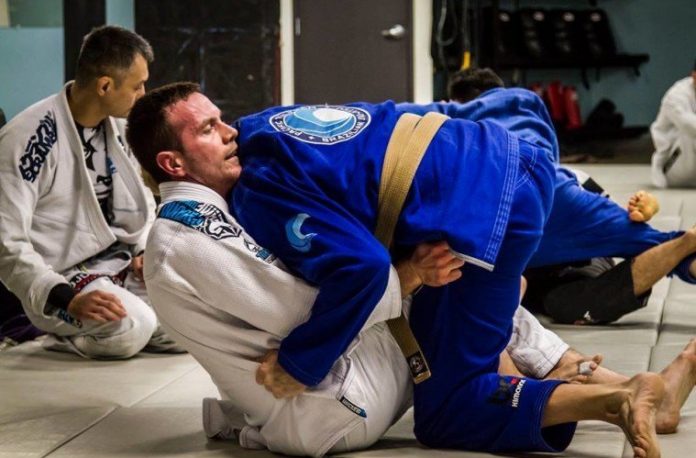 Contents hide
The butterfly guard is a specialized type of open guard that is highly efficient at the highest levels of Jiu-Jitsu. One specific aspect is that you do not have your opponent in a clinch with your legs, and your feet are not touching their hips. Rather, when employing the butterfly guard, your legs are bent in a way that resembles the butterfly stretch. Distance management is due to the hooks that your feet make behind the opponent’s knees or thighs.
Controlling The Butterfly Guard
Efficient Arm Attacks
Butterfly Guard Triangles
“Wolverine ” Heel Hooks
The Unorthodox Approach – Gogoplata
Guillotine Choke

The butterfly guard is a specialized type of open guard that is highly efficient at the highest levels of Jiu-Jitsu. One specific aspect is that you do not have your opponent in a clinch with your legs, and your feet are not touching their hips. Rather, when employing the butterfly guard, your legs are bent in a way that resembles the butterfly stretch. Distance management is due to the hooks that your feet make behind the opponent’s knees or thighs.

The guard is probably BJJ’s most varied position. Closed guard, open guard, spider guard, rubber guard, half guard, butterfly guard, De La Riva, the list just goes on. Each guard has their uses and practitioners gravitate to one or more of these guards to use in their own games. So if you decide to play butterfly guard I can say that you decided well.

It’s a very versatile guard with so many options. It can be used very well in both Gi and No-Gi Brazilian Jiu-Jitsu and many other grappling martial arts. The main thing about butterfly guard is that you’re very mobile with it. When you play this guard you have numerous options and combinations for a lot of sweeps and reversals. Also, let’s not forget about many leg lock entrances that are pretty popular these days. If you were watching EBI or any other submission only event you could see that this guard is most leg lockers and guard pullers favorite position.

So, in this article I’ll try to explain and provide you with the butterfly guard basics like controlling your opponents, sweeping, submitting and everything else that butterfly guard can offer to you and there’s really a lot of it.

The most unique aspect of the butterfly guard is the apparent lack of distance control. Despite the loose-like control of the legs, control of the upper body is essential for an Eddie Cummings-like butterfly game. Typical gripping combinations include an over-under clinch, double-overhook clinch, double-underhook clinch, head and arm control, double wrist control or two-on-one arm control variations.

Once control is established with one of the gripping sequences, you are in a good position to attack your opponent. If the opponent isn’t versed in defending against the butterfly, it will become apparent quickly. Their base will be shifting all over, not knowing whether to sit up, lean forward, stand up or commit to passing your guard.

Let’s look at some highly effective submissions you can catch your opponent with while using the butterfly guard.

Butterfly guard sweeps are among the highest percetnage Jiu-Jitsu moves out there. Check out all the rest top moves here: https://bjj-world.com/highest-percentage-jiu-jitsu-moves/

The armbar from the butterfly is executed when you can use your underhook to help elevate your opponent’s arm and prop it on your shoulder. Controlling your opponent by gable gripping your hands directly or slightly above your opponent’s elbow ensures your opponent is stabilized to finalize the attack. When your opponent begins to retreat, he will push to extend his arm. This is exactly what you want them to do, as you need to isolate the arm for an armbar. Just make sure you crunch up, applying maximum tension to the opponent’s elbow joint.

Another effective submission from the butterfly guard is the triangle. While overhooking one of your opponent’s arms, try to sweep your opponent to the opposite side. Effectively sweeping your opponent will put them on their back. Getting to a dominant mount or a side control position is always welcome.

However, an experienced opponent won’t wait to be swept to their back. They’d much more likely look to place their hand out to balance their base. Still keeping your overhook, you can use your free arm to grab the wrist that your opponent is using to balance themselves. From there, it is crucial to bring your leg, from the overhooked side, up and around their your back.  Next, the knee from your other leg should reach towards your chest and around your opponent’s based arm. This allows you to cross your legs behind your opponent’s neck.

Once you’re in this “diamond” position, the triangle isn’t far away. Often times you will have to angle your body, relative to your opponent’s body, by kicking your foot off your opponent’s hips or even the ground.

Eddie Cummings was the pioneer of dangerous leg attacks from the butterfly guard. The “Wolverine” opened all grappling martial arts practitioners to the endless opportunities of leg locks.

However, the opponent has just placed themselves in leg lock territory. The Single-Leg X, also known as the Ashi Garami, requires you to straighten one of your legs through your opponent’s leg and wrap your leg around the leg on that side. Continuing to bring your foot further in front of your opponent’s thigh will force your opponent to turn away. That’s the moment they expose the heel of that foot. Gable gripping around that exposed heel and twisting that leg inwards, towards the opponent, typically forces the opponent to tap out.

If your looking to get more in-depth with the Wolverine’s leglock game check this article out https://bjj-world.com/john-danaher-leg-lock-system/

The more flexible you are in your legs, the more this submission makes sense to use. When trying to sweep your opponent towards their free arm side, your opponent likely will stretch their arm out to counter the sweep. Grabbing that wrist, or even blocking your opponent’s arm with your forearm, will prevent your opponent from collapsing the space you have made while attempting to sweep them.

Flexibility is your best friend in this next step. Using your leg on your overhooking side, quickly maneuver it around and up your opponent’s back, over their head, and under their chin. Finish the Gogoplata using both hands to pull your opponent’s head toward you, over your own shin. For added pressure, palm your own heel and push up, while using your other hand to grab the ball of your big toe and pull downwards.

The guillotine is a refreshing option to surprise your opponent with. Ever since Marcelo Garcia revolutionized bot the butterfly guard and the guillotine, Brazilian Jiu-Jitsu has never been the same.

As your opponent bases their hand out, keep the overhook on the arm and use your other arm to wrap your opponent’s head. Finishing the Guillotine requires clinching both hands together and falling off to your side. To stifle your opponent’s front roll escape bring the leg from your overhooked arm side out and over your opponent’s back. As far as variations go, both the arm-in and the high elbow guillotines are at your disposal.

Now that you’ve seen a few good submissions from butterfly guard, it’s time to put this knowledge to use. Next time you train BJJ, start off your sparring matches from the butterfly guard and see if you can get your opponent in a submission. Remember that trying to sweep is always going to open up submission opportunities. Now go and train!