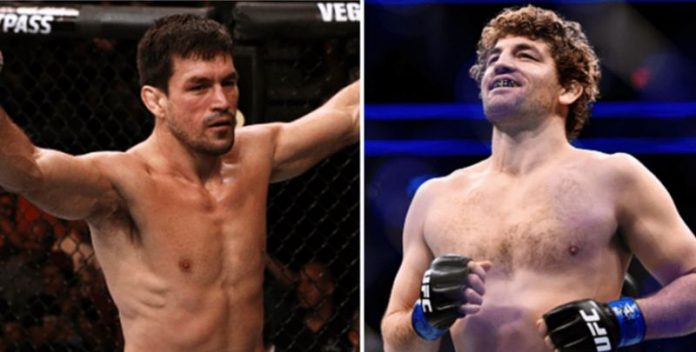 Before MMA came along everyone was wondering what is the martial art that can beat all others. For a short while there, back in the early 90’s BJJ proved to be the answer. However, as the martial arts community picked up on Jiu-Jitsu, the odds evened. Nowadays, we rarely see specialists in MMA. Most modern-day fighters are well rounded in every core discipline of MMA. However, there are some old-school fighters left that still achieve amazing results by relying mostly on a trait they’ve truly mastered. In such cases, we get to see showdowns that remind us of the old days of the UFC. Coming this October is one such event that’ll match up Wrestling Vs BJJ. Representing wrestling will be UFC newcomer Ben Askren, and flying the BJJ flag is none other than Demian Maia.

We all love to see a good UFC fight. Lately, we did have the opportunities to witness some incredible upsets. For example, Ben Askren’s arrival in the UFC has definitely not gone unnoticed. The Funk wrestler managed to score an incredible, yet slightly controversial comeback victory at his debut against Robbie Lawler. He then suffered the first KO defeat of his career at the hands (ora rather flying knees) of Jorge Masvidal. Now his latest test awaits. BJJ phenom Demina Maia is ready to give Askren his third stern test in the UFC. This wrestling vs BJJ megafight will take place in October in Singapore, and we’re all eagerly awaiting it to happen.

Before arriving in the UFC, Ben Askren had a stellar record of 18 wins and 1 no contest. His victory against Robbie Lawler brought him an all-important 19th win but Jorge Masvidal was there to cut this streak short. A long-time Bellator World Champion. Askren was always very reliant on his wrestling skills. That often made people call him boring, due to his style of fighting. For grapplers, though, 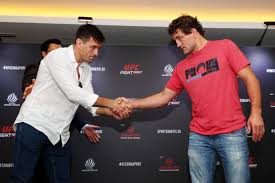 Askren’s Funky style is anything but boring. In fact, before the UFC he used his wrestling to deal with all kinds of specialists, from striker to Jiu-Jitsu guys. However, the key thing to consider is that he was outside of the UFC. While there’s undeniable quality in other organizations, clearly, the UFC is a whole different ball game. And so is Demian Maia.

Funny enough- Askren is not a big fan of BJJ. He has even declared himself to be a black belt despite never having gone through the ranks. His wrestling is definitely at an elite level, but his BJJ is not quite there yet. Despite his constant jabs at Jiu-Jitsu guys, Askren has never really faced someone of Maia’s caliber. So far, both Lawler and Masvidal were brawler more than anything else. Maia’s bran of Jiu-Jitsu is something very different though. Plus, there’s the fact that Maia is a true UFC veteran, with 12 years of experience in the UFC. Will this matchup be another slipping stone for Askren or is he in for a dominant performance? One thing is for certain,g he is not someone Askren should take lightly. Come October and we will have the answer to this Wrestling Vs BJJ conundrum.

ON the other hand UFC new boy Askren is a true legend of the sport. Demian Maia did not have the easiest path in the UFC, but he is still here and going strong. While his record of 27-9 looks less impressive than Aksren’s it does include nothing but world-class opponents. Moreover, 13 of those 27 victories are by way of submission. Throughout 12 years, Maia has faced the who-is-who of MMA across two weight classes. Currently, he is coming off a two-fight win streak over Lyman Good and Anthony Rocco Martin.

Before those two fights, though, Maia was on a three-fight losing streak. What is hugely important to mention is that those were all seasoned wrestlers that he lost against. Colby Covington, Tyron Woodley, and Kamaru Usman are all wrestling powerhouses. While Askren is not at the same level of power or explosiveness (as proven in his wrestling match against Jordan Burroughs) he certainly has the technical skills to equal, or even surpass them. However, Maia’s experience in not just the UFC, but also facing wrestlers is something we also have to factor in. Is he the one that’ll bring glory to Jiu-Jitsu in this Wrestling vs BJJ matchup? After all, he has beaten wrestler the likes of Jon Fitch and Chael Sonnen in the past.

Wrestling vs BJJ In MMA

Matching up Wrestling Vs BJJ in MMA is nothing new. In the early days, this was a very one-sided affair, due to the prowess of BJJ on the ground. However, as the playing field evened, there have been some truly great grappling battles in MMA. When it comes to the UFC, you can expect a real grappling delight in the Askren vs Maia fight. For grappling fans across the world, this is areal dream matchup. For the generic UFC fan, it may prove to be a “boring” fight, with lots of clinching against the octagon and grappling exchanges o the ground. However, Maia also has some solid striking skill to surprise Askren, although power is on Askren’s side here.

The fight is actually the headliner of UFC Singapore which is set to take place on October 26th.

If you’re looking to blend both wrestling and BJJ than you should check out the “Shin Whizzer System” DVD by Neil Melanson. The legendary grappling coach has a neat little system that surprises everyone in both Jiu-Jitsu and MMA. Or, you could check out his entire DVD collection HERE!

I am a BJJ guy (clearly) so I will definitely be leaning towards Maia for this one. However, I aslo love wrestling and was actually an Askren fan until a while ago. Given both options, though, I’m definitely rooting Maia, although I do not necessarily see him winning. In fact, I see this as a “banana peel” match for both fighters. After all, this is not just two fighters on the line, this is a stylistic Wrestling vs BJJ match fo the ages. Who do you have winning this?