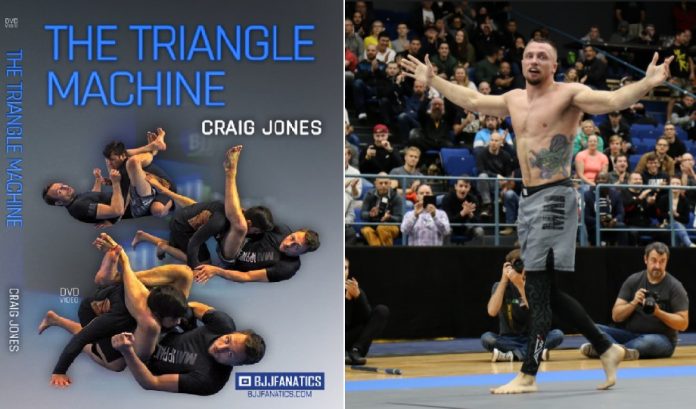 Ladies and gentlemen, he’s back! The most exciting grappler from Australia and one of the top competitors of today, Craig Jones is back! Since his meteoric rise to stardom, Jones has been relentless in putting out high-level digital material. So far, Craig Jones DVD instructionals have outlined his grappling brilliance in all aspects of the Gentle Art. From leg locks, through Z-guard magic to lightning-fast back takes, Craig Jones has done it all at the highest level of competition. What you get with a Craig Jones DVD instructional is exactly what you see from him in competition.

Back before the world knee Craig as one of the most proficient leg lockers of today, he was winning matches via his favorite submission. Surprisingly, his favorite submission is not the heel hook or any leg lock for that matter. Craig managed to wind the No-Gi World Championship at brown belt thanks to the use of the triangle choke.jones is extremely well versed in hitting the triangle from everywhere, especially from his Z-Guard. Now, he has come out with an in-depth instructional on the triangle choke, bringing to light some amazing never before seen details! As with any other Craig Jones DVD, this one is a must-have so hurry up and get it before your opponents do!

The triangle choke is one of the very basics of BJJ. It is a move that people learn at a white belt and usually sticks with along their entire Jiu-jitsu journey. The triangle has been proven to work at every level of competition and across all competitive formats. However, this choke is anything but a simple submission that has lots of details and nuances to it. it is a true embodiment of the BJJ spirit – technique over brute strength. The triangle choke is a giant killer when used correctly. It also has an astonishing number of just as high-percentage variations that literally take people’s breath away.

The Latest Craig Jones DVD is structurally different from his previous releases. In all honesty, Craig does seem to enjoy switching digital formats with every new release, but this one is quite the change. Instead of the usual 3 or 4 disc instructional that slowly progresses into a complete system, this time Craig goes a different route. This DVD is organized into chapters that are surprisingly long and full of detail. Expect to re-watch this material a few times before you truly get the knack of it. No matter what level you’re at, you’re going to find new and useful information in this digital release.

As always, Craig is very easy to listen to, despite the lengthy chapters. His way of teaching is so encompassing that you won’t even notice how long a demonstration is. Of course, he offers countless follow-ups, adjustments, transitions and everything associated with triangle chokes.

In a sense, Craig Jones starts his explanation from the end and works his way backward. When learning submissions, this is according to me, the best way to approach the subject. You need to know exactly what you’re looking for when you’re entering a position, so it makes a lot of sense to learn the finishing sequences first. This is exactly how this latest Craig Jones DVD instructional is structured.

A crucial detail that I found very useful from this DVD was adjusting the triangle before locking in the legs. What Craig demonstrates is the best way not only to keep the triangle structure but also tighten it up before you even transition in for the kill. Although it goes pretty much against everything you’ve learned about the triangle so far, it has worked for Craig. So far, it has also worked for me at the gym so there is a method to the madness, even though it may only be apparent to Craig.

What really stands out about this Craig Jones DVD is the focus on entering into the triangle choke from top positions. Craig demonstrates plenty of triangle entries from positions that are usually not connected to the triangle.

First up is side control. Craig shares a very original way of getting one of the best BJJ chokes from one of the most often used positions. While other triangle setups from top side control are usually telegraphed, Craig’s take on it is not. It is a sneaky and subtle way of slapping on the triangle choke before your opponent has an idea of what’s going on. Oh, and it is going to work for everyone. Craig shared details of how to get the choke regardless fo body type or size.

Next, Craig connects two of the most dominant positions in Jiu-Jitsu, the back and the mount via a triangle choke! He offers great insight on how to set the choke up while in the mount. As if that wasn’t enough he also offers s a triangle variation from the back. The best thing is that the triangle between these two positions is interchangeable. This means that f you get it from the back, and you fail to finish it because you still haven’t seen every little detail on the DVD, you can just transfer to mount and finish it from the top.

As I pointed out earlier, the DVD starts with finishing details so you know where you need to land. In typical Craig Jones fashion, the instructional has some wicked entries that you haven’t seen before. Well, you have, but only if you saw Craig Jones at the ADCC.

What I really, really like is his triangle choke follow up to a kneebar submission. With people hunting leg locks left and right, defense against these submissions is also evolving at a fast pace! As such, hitting a kneebar is getting more difficult by the day! Luckily, Craig has a reverse triangle option off an unsuccessful kneebar attempt. Another move that is slightly counter-intuitive but undoubtedly works like a charm! Which gets us to the final, and most attractive part of this Craig Jones DVD.

When Craig fought at the ADCC last September, he managed to hit a sweet flying triangle that nobody saw coming. Now he dissects his move and how you can do it as well. I’m not really big on flying submission but I got to say, I am tempted to give this one a try! But that’s not all. There’s also a move Craig calls the low flying triangle. it is done as a follow up to an Uchi Mata attempt and looks to be a very formidable weapon in both Gi and No-Gi!