The most charismatic and likable grappler of today is out with a brand new gem! If you do not own a To De Blass DVD so far, you’re not fit to call yourself a grappler. The UFC veteran is one of the most formidable grapplers of today, as well as a premiere Brazilian Jiu-Jitsu professor. Tom is as hardworking as they get, constantly training champions, competing and producing high-quality DVD instructionals on a regular basis. He is famous for tackling subjects that other coaches do not focus on so much. A good example is his Submission Escapes DVD,  as is his Half Domination set. Now, he hits it right bang in the middle again, with The Butterfly Half Guard DVD. It is just what the grappling world needed!

The Butterfly Half Guard DVD focuses on a very specific aspect of half guard that we got a glimpse of in Tom’s Half Domination DVD. The butterfly half guard is a very interesting variation of a BJJ classic and is one I really enjoy using. I came across it a long time ago, in an old Robson Moura instruction. Since then I experimented with it, learning mostly what not to do. The position offers a lot of safety, as well as a really easy sweeping option. Tom’s previous half guard DVD touched upon the subject briefly, opening up leg lock setups from the position. It worked for me really well. Now, I’m as excited about The Butterfly Half Guard DVD as I’ve ever been about a BJJ DVD instructional! 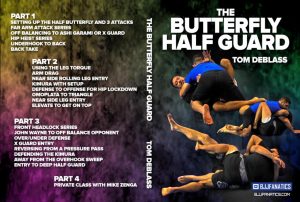 Tom DeBlass and Butterfly Half Guard?

The reason why exactly Tom DeBlass is the man to show this modern variation of the half guard is his prowess in the position. Actually, he is a wizard from all half guard variations and has a few of his own inventions to boast about. Think about this fact for a minute – nobody has passed Tom’s guard in training or competition for more than a decade! Furthermore, his favorite guard is the half guard! As far as competence about a certain subject goes, nobody is a better fit to explore the Butterfly Half Guard more than DeBlass. Plus, The Butterfly Half Guard DVD set contains an amazing surprise that’s going to make you want to jump with joy!

The Half Guard Of Tom DeBlass

Tom DeBlass is a Ricardo Almeida black belt. He is the owner and head coach at Ocean County Jiu-Jitsu in New Jersey. Tom’s teaching methodology has resulted in champions like Gary Tonon and Gordon Ryan, who both train with him on a regular basis. DeBlass is a part of the notorious crew that hangs out in the blue basement of Renzo Gracie’s academy and gravitates around Danaher. As a competitor, Tom has seen and done it all – from the UFC to the ADCC.

Apart from being an amazing coach, Tom has a grappling style that is a great fit for most people. This is exactly what makes The Butterfly Half Guard DVD, and all his other material, such a valuable learning tool. Anybody, from beginners to the most advanced students can benefit from his instructionals. Furthermore, they’re perfect for older grapplers or physically weaker ones. Despite being a big, heavy guy, Tom is incredibly technical.

The one part of his game where Tom is unbeatable is the half guard. He is a master of all kinds of half guard variations, from the most basic to really crazy ones. Where does the butterfly half guard fit amongst all those variations? It is a simple-looking guard, that works extremely effectively and is in the advanced guard’s category. That doesn’t make it unusable for beginners though, it’s just a better fit for people who already have some experience with the half guard and the butterfly guard as separate positions.

The Butterfly Half Guard DVD

The butterfly half guard is the perfect blend of two very efficient positions in Brazilian Jiu-Jitsu. The half guard is a position of safety, offering them opportunities for a slower-paced game that slowly gets an opponent entangled. The butterfly guard is a much more dynamic position, offering sweeps and transitions at the expense of comfortable control. Combining both is as easy as threading the leg you usually use as a knee shield in half guard, inside the thigh of the opponent’s trapped leg in half guard. Presto, you are in the butterfly half guard and can reap all the benefits and none of the drawbacks of both guards!

The butterfly half guard is slowly becoming a staple of today’s modern BJJ game. the reason for this is that it offers much more protection for the bottom player in terms of leg locks. It also makes smash passing virtually impossible. Moreover, it provides increased sweeping leverage as well as better control over the leg. And, of course, there are leg locks. Every time you have both your feet in between the feet of an opponent, it is Ashi Garami time, as you’ll see in The Butterfly Half Guard DVD

Speaking of which, the DVD is once again a four-part instructional. The first three volumes are all classic Tom DeBlass DVDs. Lots of important information organized neatly into multiple chapters. All of the chapters, in turn, connect to each other very easily, allowing you to for a bigger picture. The final disc is a real treat in itself! Read on to learn exactly why!

DVD 1 – Setting Up the Basics

Tom kicks The Butterfly Half Guard DVD off by explaining exactly what the guard is. However, he doesn’ spend much time dwelling on the position itself. Why would he, though, as it is simple enough to set up? Switching directly into attack mode, DeBlass offers attacks on the far arm which most people will find surprisingly easy.

NoOt spending too much time on armlocks, Tom goes directly into what most people are going to look for in this DVD – leg locks. He teaches very interesting entries to the Ashi Garami, based on the principle of Kuzishi. Rounding of the basics of the butterfly half guard is a couple of back taking options. Talk about variety in just one volume!

Remember when I said all levels of grapplers are going to benefit from this DVD? Well, the second volume explores some more elaborate avenues of attacks. Namely, Tom goes over some innovative concepts, now available from the position due to the butterfly hook. This volume skips the leg locks and offers a wide variety of sweeps instead. There are also key tactics to maintaining the butterfly half guard and controlling your opponent’s hips.

As far as submissions go, Tom sticks to some of the basics here. He opens the door for Kimuras, triangle chokes, and omoplatas.

As the Butterfly Half Guard DVD progresses, so do the techniques DeBlass has on offer. I never knew there were so many options for this cool position. As a huge fan of the front headlock, I was stoked to start watching the third volume. It kicks off with what DeBlass calls the front headlock series and it works like a charm! Getting the front headlock from the butterfly half guard is the dream combination for me, and one that does not fail!

Another key element of a successful guard game are options to defend against passes and retain the guard. Tom doesn’t skip over this key part of the game. He covers most of the usual ways people are going to try and get past your guard. The over-under pass and pressure pass defenses are as important as anything you’ll learn in this DVD.

There are also a few defense options against common submissions like the Kimura. In a truly high-level style, Tom ties them all into simple and effective counters that are going to turn the tables quickly.

The final DVD is really, truly the most important bit of this instructional. There’s no better way to tie things together than going through all the material and asking DeBlass what still doesn’t make sense. Who wouldn’t want a private class with Tom DeBlass on a subject like a butterfly half guard? Well, that’s exactly what you get.

The final volume of The Butterfly Half Guard DVD is precisely this. It is an hour-long private class with Mike Zenga, covering everything there is to cover about the butterfly half guard. Three DVDs full of awesome information plus a free private with Tom DeBlass? No wonder I got this DVD fresh off the press. 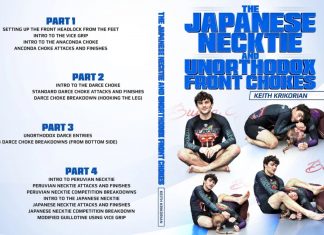 BJJ World - 0
One of the best chokes in existence (according to me, anyway) is the Japanese Necktie. It is brutal, it is tight, it is nearly...