Sambo is a crazy martial art. It is more or less MMA, at least the Combat Sambo version, but done with Gis (well, parts of Gis) on and under very interesting rulesets. Given that Samo is highly reliant on submissions, plus it has some wild takedowns, it makes it the perfect complement to Brazilian Jiu-Jitsu training. On the subject of Sambo submissions for BJJ, the sport is right up there with catch wrestling as a never-ending source of moves that will surprise everyone you roll or compete with. Of course, you have to consider the legality of them under certain rue sets, but it is safe to say that Sambo submissions are something you should definitely add to your game, particularly if you’re a Gi grappler.

Sambo is fun to watch. Try it some time. Actually, let me tell you the two out of three versions of Sambo you can actually watch. Military Sambo is, obviously, off the table. It is how Sambo came to be in the first place. In a sports-sense, you have Sport Sambo (grappling only) and Combat Sambo (very similar to MMA). In both, however, regardless of the presence of strikes, you’ll see a heavy focus on grappling. It makes perfect sense that people like Fedor Emelianenko, Khabib Nurmagomedov, Reilly Bodycomb, Stephen Koepfr, and others have so successfully used Sambo submissions to rule over the MMA / BJJ world for extended periods of time. In fact, nobody has been able to solve Khabib at the moment.

Sambo And BJJ – The Key Differences

Apart from the obvious difference of the two arts having a very different origin story, I’d like to focus on the rules of both, how they differ, and what that means for Sambo submissions for BJJ. First of all, let’s talk about attire. Sambo folks wear a Gi, just like in Brazilian Jiu-Jitsu and Judo.  However, In Sambo, they only wear the top of the GI, or the Gi jacket, if you will. Instead of the pants, they wear shorts, like in No-Gi grappling. This makes Sambo the perfect fusion of Gi and No-Gi grappling, and hence, a great source of very versatile and evil submission holds.

In Combat Sambo, there are also strikes. This makes it similar to both Japanese Ju-Jitsu and MMA. the engagements are similar to MMA, with bouts allowed to go on after clinching, into takedowns and ground fighting exchanges. In terms of gear though, protective headgear and gloves are a must in combat Sambo. When it comes to gripping, three are different strategies, particularly when strikes are involved. The presence of the Gi really changes how clinching, throws, and chokes can be set up, and lots of those things have a great carry over into Brazilian Jiu-Jitsu.

A huge difference between Sambo and BJJ though is the use of chokes/leg locks. While Jiu-Jitsu discourages (yup, still) the use of leg locks, Sambo thieves in coming up with innovative ways to break ankles, knees, and hips. In fact, some of the best original leg lockers, like Gokor Chicichyan have extensive Sambo backgrounds. On the other hand, Jiu-Jitsu allows chokes and strangles of all forms, something that Sport Sambo outlaws as dangerous. Obviously, seeing certain moves as dangerous boils down to how regulatory bodies of different sports view techniques and has nothing to do with reality. Never mind that, Combat Sambo, and a newer branch of sport Sambo called Freestyle Sambo do allow for chokes, and they have come up with some really interesting options when it comes to choking with the Gi.

It is these rules in particular that define how well Sambo submissions work. In sports Sambo, where going for chokes is not an option, the focus has to be on the body parts available for holds. In this case, that would be the arms and legs. the spine is also out of bounds, with cranks not allowed in Sport Sambo. However, similarly to what has been happening over the years in BJJ, this ruleset has refined Sambo’s leg and arm locking techniques to a level unseen in other grappling martial arts. Moreover, if we’re being creative, we can simply borrow some (or all) of these Sambo submissions for BJJ in order to add versatile, unexpected, and extremely effective submissions to our game. It has worked for me. 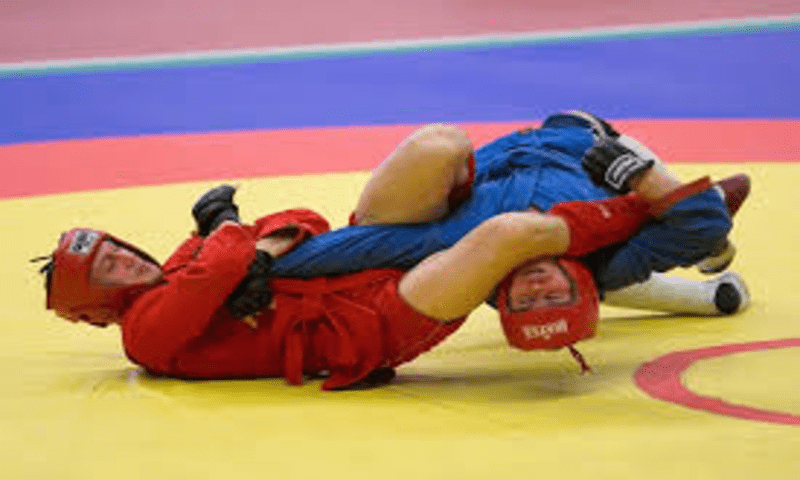 However, why stop there? As I said, Sambo rules do differ between different Sambo disciplines. That said chokes that are used in Freestyle and Combat Sambo are perfectly legal to use in Jiu-Jitsu. In fact, you could do so at every belt level. Given the presence of the Gi jacket, the predominant strangling techniques of Sambo revolve around using the Gi to choke people out. In that department. There are some highly innovative moves that could really help you finish people in BJJ. Simply put, most BJJ folks won’t expect grip configurations for chokes like those in Sambo, meaning you have the element of surprise which is always a great tactical advantage.

Lastly, I’d like to touch on gripping and throws/takedowns. The weird (for us BJJ people) fusion of Gi and No-Gi means you really need to figure out creative ways to grip in order to regulate distance,. With strikes involved, this becomes paramount. Moreover, takedowns and throws are also specific and plentiful, once again featuring countless combinations of Gi and No-Gi grips to increase their efficiency. Plus, most Sambo takedowns tend to end straight into submission holds, rather than the positional play we often see in Jiu-Jitsu.

The best Sambo submissions for BJJ are not going to be the same for everyone. Someone will enjoy leg locks more than chokes, while others will thrive in the arm locking department. Luckily, Sambo is well stocked when it comes to all three types so of submissions we use in grappling. That said, I’ll just go over one of each category as an example of how Sambo submissions can really help you improve your submission rate in BJJ.

Starting with leg locks, I’ll talk about a position that offers several different leg locks, rather than just a single submission hold. The Sambo knows, or Game Over position is one of the tightest Ashi Garami positions you can use in all of grappling martial arts. It works by placing a leg up and over an opponent’s hip (knee reaping) and then using both your legs to wedge the free leg underneath. It really is a knot and one that’s extremely hard to get out of. The leg that’s trapped on top is right there for the taking, with ankle locks, heel hooks and toe holds readily available, in several different varieties. Getting out is next to impossible once you’re in, and you can enter from both top and bottom.

A forearm slicer is my pick to represent arm locking Sambo submissions. It is unusual, as in BJJ, even when slicing, the focus is usually on the biceps. In this case, it is the forearm that is being sliced, but not in terms of muscle slicing but an actual break of the forearm bones. For this brutal submission, you use the legs in order to tangle the arm, and you start with an opponent in the turtle position. Simply, sneak the nearside leg inside to trap the biceps muscle with the back of your knee. You then sit back and use both arms to pull the wrist towards your body. If you need to increase the pressure, you can always triangle the legs to make the pain unbearable.

I’ll wrap Sambo submissions for BJJ up with a choke from the back. getting the back in BJJ does not guarantee you’ll choke someone out. In fact, it is the hardest spot to finish from, whether it is a Gi or No-Gi choke. This particular Sambo choke solves that problem because the grip configuration is completely unexpected and most BJJ folks won’t have an idea what’s going on. The goal is to thread the underhook arm across the front so that you get a grip over the opposite side shoulder. Now, you place your other arm across, looking to get a grip on your own forearm. This will create a very tight scissor-like choke with both your forearms that’s extremely hard to get out of and gets instant taps.

You don’t have to go cross-training Sambo in order to learn Sambo submissions for BJJ that will brighten up your game. All you need to do is watch some Sambo matches, perhaps check out an instructional or two, or simply give the three moves I described above a try. The one thing that is for certain is that you’ll get a fresh perspective on finishing people. That, and a few tricks up your sleeve for when none of the “traditional” BJJ submissions work.