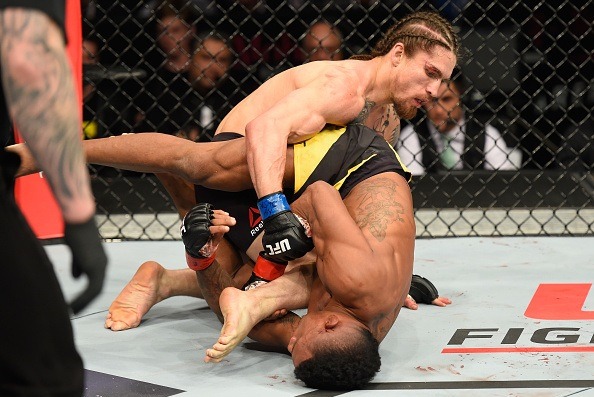 It is time to put everything you think you know about leg locks aside. Yes, you’re waist deep into all of the modern leg lock positions and submissions. Imanari rolls are no big deal for you, and your Honeyhole setup is simply inescapable. All that is nice and well, but now it’s time to widen your arsenal with the help of a truly old-school leg lock setup. This one comes to us courtesy of Sambo but has been refined to fit BJJ since. The leg lock itself is nothing new, as we’ll be focusing on the kneebar, a staple of grappling. However, the main emphasis is going to be on getting to the kneebar in a very specific and entertaining manner. Time for a leg lock classic – the rolling kneebar!

Sambo is a martial art originating from Russia. The art’s original intent was to be a military hand-to-hand combat system. Its name actually means self-defense without weapons and is something the Russian military uses to this day. In a more civilian-friendly spinoff, there’s also sports Sambo and combat Sambo. Combat Sambo is very close to MMA, including both grappling and striking, although under different rules. Spot Sambo is the pure grappling aspect of the art. Regardless of variation, Sambo is really keen on leg locks and teaches them to students from very early on. One of the top leg lock entries Sambo has to offer is the Victor roll, AKA the rolling kneebar.

While some may argue that old-style leg locks don’t work, I beg to differ. After all, there’s nothing new in the leg lock game of today apart from how it is organized. The knee bar is still one of the most useful and reliable lower body attacks. The mechanics of the lock itself provide ample control over an opponent. ticking all modern leg lock locks. For all you Craig Jones wannabes out there, you can use the attack to transition into more heel hook oriented attacks. Or you could use it as a takedown. Or even as a counter and/or reversal. Such versatility!

How The Knee Bar Submission Works

The kneebar submission is basically a straight joint lock. The best way to explain the knee bar is with the help of the armbar. For an armbar, you basically use your whole body to isolate and, eventually, break the opponent’s elbow joint. Since the attack is on a joint that’s in the middle, you need the arm to be completely straight. In essence, the knee bar works much like the armbar with a few slight differences.

In terms of controlling the foot, there are a few different grip options. The basic one requires you to place the fingers of the opponent’s foot on your neck. Tilting the head towards that side is going to trap the leg and cause an extension crucial to finishing the kneebar. Always keep one and on the heel to control the leg until you’re ready to finish. For the finish, you can wrap a figure four around the ankle, still keeping the fingers trapped with the head. finishing is as simple as extending your hips, much like for an armbar. Or, if you want to be particularly brutal, add a twist while extending the hips.

Check Out Craig Jones And His Leg Lock Principles With The Help Of His “Down Under Leg Attacks” DVD Instructional. You’ll Learn A Bunch Of Rolling Entries Into All Kinds Of Leg Locks Form One OF The World’s Best! Here’s What To Expect.

The knee bar is a submission that plays a huge part in both Gi and No-Gi Jiu-Jitsu. It is legal for brown and black belts in IBJJF competition and for everyone in other formats. It is a relatively safe submission and one that everyone should have in their arsenal. Actually, people should look to start learning the kneebar as early as a blue belt. By the time you need to use it in a competition, you’ll be more than ready. Even for the rolling kneebar.

So, what exactly is the rolling entry into the knee bar? Think of a forward roll, just like you do (or should be) during every warm up. Now imagine that you’re trapping an opponent’s leg between your legs in the middle of the roll. That’s essentially how the rolling kneebar begins. In order to explain the mechanics better, let’s use a practical example.

The starting position is on the feet, with an opponent behind you having a body lock. The goal is to position yourself slightly to the side so that you have one leg on each side of one of the opponent’s legs. From there, you’ll need to bend forward, arms to the mat to bake yourself as heavy as possible. Before you think about rolling you’ll have to anchor the leg of you’re attacking or you’ll achieve nothing. To do that, place a grip as high towards the knee of the opponent as possible.

Time to roll. When you roll, make sure you roll over your shoulder and not your head just like when you drill. For the best effect, look toward the other leg of the opponent when you roll.

The ankle pick is a great takedown that transcends the Gi/No-GI border. Throw in a kneebar and you have the perfect storm. Whenever you shoot for an ankle pick, there’s a real danger that the opponent is going to pull the leg ba which leaves you in a vulnerable position. However, pulling the leg back requires a shift in body weight on their part, which means you can go for the other leg. Simply go for and Imanari roll but stop halfway and trap the leg. From there on you actually, need half a roll to get to the kneebar.

You can also use the knee bar as a continuation of Judo throw attempts, like the Uchi Mata. Most Judo throws place you in the perfect position for this move anyway.

In an attacking/counterattacking fashion, you could go for the rolling kneebar from the bottom as well. You could do it off a butterfly guard sweep attempt or from a failed Inside Senkaku entry. These are by no means the full extent of entry options, just some of the most used ones.

If your opponent shifts base while you’re looking to sweep them from the butterfly, they’ll end up on the ground, one of your legs trapped in between theirs. This is a perfect position for them to pass with a leg surf, so you need to react. The rolling kneebar works best of an overhook butterfly guard, but it can be done with the underhook if needed. Once the opponent has your leg on the ground simply switch to your knees, and roll immediately, hooking their leg as you do. It is that easy.

The same setups work from the Inside Senkaku. If you didn’t control the hips well enough, the opponent is going to stand straight back up, attempting to put weight on their foot and eventually pressure you into passing. Once that happens and they end up on top, release the triangle and roll into a kneebar. Be careful to time it right as you need the opponent standing as high as possible. If you’re too late though, you’ll end up under a lot of pressure.

Probably the most valuable use of the rolling kneebar is when you’re stuck in turtle. Getting out of turtle can be a real problem, especially against an experienced back attacker.

From a tight turtle position, make sure you sneak one of your legs to the inside of the opponent’s legs and make a hook. without it, there’s no point in rolling. Once you have that, though, you can look to roll oThe THe only trouble is, you need to do it fast and precise. You also need to establish grips on the leg while rolling. Otherwise, the opponent is just going to switch base and end up on top.

How To Master The Kneebar For BJJ And MMA