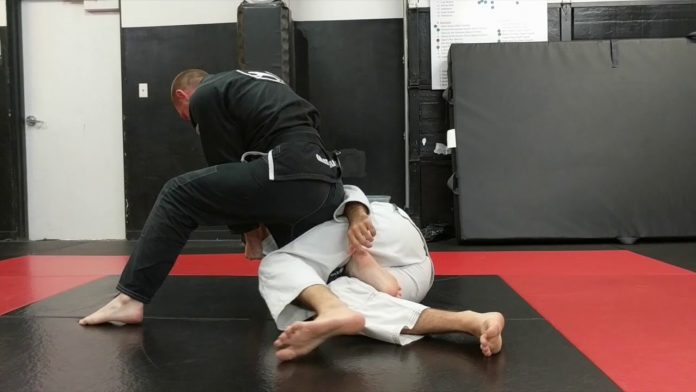 What happens when people pass your guard? One option is accepting they’re now inside control or somewhere worse, and trying to run for your life. Not a really attractive option, is it? Next up, you have the option of guard recovery. However, that doesn’t mean that if you lost one guard, you need to get back in the same one straight away. On the contrary, the guard game has layers. And the perfect way to paint them clearly is through the full guard. Once you lost that, you most likely have a shot at the half guard. That’s one layer. Most often, when people pass the half guard, they think it is a job done. But it is not, there’s yet another layer that can get you out of plenty of trouble. That is the Quarter guard – the final frontier of BJJ guards.

The quarter guard is not a guard many people play often. There’s a simple reason behind this – they think it doesn’t work. If you take a look at white belts, they often end up there by instinct when they first start trolling. And sometimes, through sheer strength, they can clamp down there and give even higher belts headaches. However, when strength runs out, they inevitably give it up. What if I told you that you can use technique and mechanics to remain in the quarter guard as much as you want? Moreover, you can do pretty much everything you set your mind to form there. And yes, it will work at every level and in bothGi and No-Gi. In fact, it is surprisingly simple and effective. Plus, it comes in handy more than you can imagine!

When Half Guard Is Not Enough

What happens when you run out of guards? You get your guard passed, of course. Everyone is used to using the half guard as the last line of defense. Regardless if you’re mainly playing closed or open guard, the half guard is the last resort when someone’s trying to pass and you’ve messed up with your primary guard. And it is a logical destination as it offers literally everything, from sweeps to submissions and even the same spot to rest. But, it is subject to what I refer to as the “overuse syndrome”. That means people use it so often that there are a thousand ways to pass it nowadays.

At the moment, I’d call ti even with the options people have when it comes to playing half guard. That is in regard to the bottom and top person, of course. For everyone that likes to be highly efficient in BJJ, a 50/50 situation is never a good spot to be in. To that extent, the half guard is not enough to ensure your guard won’t get passed. Moreover, with the leg log game now in full effect, most half-guard variations are like an open invitation for people to look for heel hooks, toe holds, and kneebars. Granted, some variations like the lockdown and butterfly half guard can be more challenging to pass, but people are figuring them out fast.

Imagine if there was an extra layer of defense that came after the half guard. Moreover, what if it could be easy to work from and hard to pass at the same time? Well, there’s no need to look too far as the quarter guard is right under your nose! Just give this simple little guard a real try.

Inner Workings OF the Quarter Guard

What exactly is the quarter guard, then? It is simple – it is a closed guar on the ankle of an opponent. The easiest way to explain it is to imagine yourself in a knee slice pass position. In most cases, this is a point of no return for the grappler on the bottom. Well, this is where the quarter guard shines. The idea is to use your legs to wrap around the ankle of the opponent. The way you do it is to try and lift your bottom leg’s ankle as far up as possible and then reinforce it with the top leg by crossing your feet. If you can pull off a triangle that’s an even better wedge. The master level is getting a mini lockdown with your legs around the opponent’s ankle. Good luck getting out of that one.

The reason the quarter guard can be so annoying is that it can keep an opponent there with no way of attacking. The wedge you crate with your legs is actually really powerful and tight when done right. That means that slipping the ankle in the direction of the knee is literally impossible. Moreover, standing up won’t really yield great results either, since you have all the control over their leg. And here comes the best part: the knee slice position actually works in your favor when you have the quarter guard. The angle is horrible or the person on top to do anything and perfect for you to sweep in any direction you want.

In fact, sweeps are so readily available you can easily make up your own. Of course, it depends a lot on the grip fighting, but you’ll figure that out quickly. Instead of trying to provide techniques, I’ll give you directly instead. Form the quarter guard, you can go upwards (kick the butt), downwards (push on the knee with your hands) or sideways (on th opposite side of your opponent). In the first case, you go out the back door and get th back or sweep. In the second one, a lockdown half guard transition before you sweep is my advice. The final one is a direct sweep that’ll open up further leg locking options.

3/4 Quarter Mount And Other Grappling Fractions

To be completely honest, I have no idea who came up with the quarter guard. Still, the best thing about it is that it does not end there. You see, you can’t just defend a guard pass with it – yo can also prevent people from mounting you. Whether it is from half guard or side control, the three-quarter mount is also a viable option. And it works just like the quarter guard does.

In fact, for the three-quarter mount, imagine you have a quarter guard and your opponent places their knee, along with your wedge on the opposite side of your body. This is for demonstration purposes only as you’ll need to switch the legs for it to work. In both the quarte guard and 3/4 mount, the principle is the same – place the mini lockdown, or any wedge you can get on the outside of the leg. That’s it. No points for the top person and not one of the usual mount submissions is going to work. Moreover, getting the back is going to be notoriously difficult, seeing as the leg is really trapped by your wedge. Once again, you have complete freedom to annoy your opponent for as long as you wish. Or go for some interesting attacks of your own.

One thing you can do with ease is a transfer back to the quarter guard. All you need to do is push the knee toward the other side. Even if the knee ends up in the middle, you’ve got great options as there’s no mount, nor knee slice anymore. Plus if you want to attack you can simply keep your knees to your chest, lay on your back, and then extend your legs. You actually end up in the single leg X guard.

Why does the quarter guard, and all other variations of it work? It is simple – because it is not a position for defending or escaping. In fact, it is not a bad spot to be in at all! It is a guard like any other, with the added benefit of people not knowing ho to get past it. Of course, there are passes that the top person can use, but in most cases, they’ll just open up more guard recovery options for you, it is a sneaky one, and whether you use it to attack, hold or just escape, it should be apart of your arsenal. Particularly if you’re already at a higher level and looking to compete. 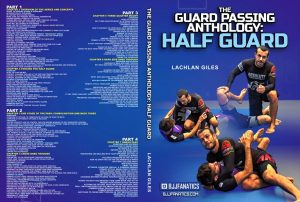 Check out Lachlan Giles’ “Half Guard Anthology” DVD. It contains a staggering eight volumes filled with all the information you’ll ever need on the half guard, including the quarter guard.