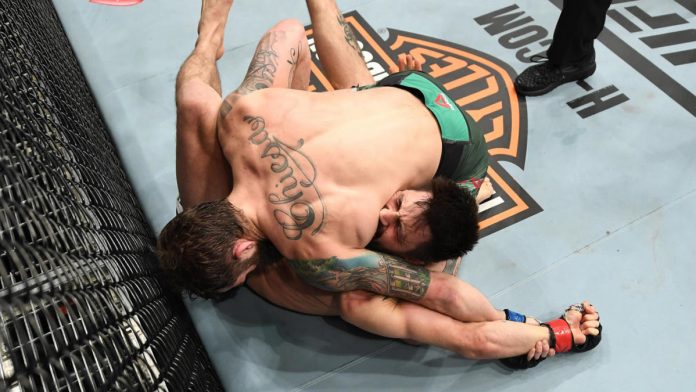 The Kimura is a highly reliable submission in grappling that’s probably as old as grappling martial arts.  It is a very versatile move that people enjoy doing because of two main reasons. One, it is easy to understand after an only a short time in BJJ. Secondly, it works from a multitude of positions, top, and bottom, making it a truly formidable weapon. After all, it is one of those submissions that transcend time and rank. it works as both white and black belt, and it has been doing so since the dawn of grappling sports. And here’s the real kicker – it just keeps getting better. The last weekend of 2018 brought about UFC 232, and with it, a really cool twist on the Kimura submission. Michael Chiesa’s one-handed kimura reminded us of an unusual yet extremely effective way of getting a tap.

Every now and then, at a stacked UFC event, there’s a move or two that really attract attention. Regardless of which department they’re in, they become the focus of many people in the following months. Just recently, Alexey Oleynik’s No-Gi Ezekiel choke from bottom mount reached fever-pitch. After UFC 232 though, we seem to be unraveling another forgotten gem of BJJ – the one-handed Kimura finish. Michael Chiesa sure pulled one over Carlos Condit, earning a massive victory in an impressive fashion. Chiesa’s efforts reminded a lot of grapplers that the one-handed Kimura is a real dangerous submission that works at the highest levels. Furthermore, it inspired a whole new generation of grapplers to go experiment with it. Offering our input in this global fascination with this Kimura variation, we have a detailed breakdown below:

The Kimura, as we already covered, works from both the top and bottom. Moreover, it is applicable in many different positions. Each Kimura setup has its advantages and weaknesses. The main issue with Kimura locks from the bottom is keeping the posture an position during the early stages. A thing that often meddles with Kimura looks from the top is the lack of space for successfully finishing. Especially against extraordinary flexible grapplers.

Since Chiesa got the finish over Condit from the top half guard, we’ll focus much of our attention to that position. And we’ll go over some “traditional” Kimura details before moving on the one-handed Kimura lock. When you’re going for a Kimura from top half guard, the idea is to attack the arm that’s on the opposite side of the half guard. This gives you a very stable position to attack from and a great range of motion as well. Since you have a great spot to control the opponent’s shoulders, head, and hips, setting up submission is not difficult. It is actually even easier when you do not need to transition an inch to get it. All you need to do is keep one hip to the ground.

Locking the Kimura requires you to get a figure four grip on the opponent’s far side arm. This is where most of the initial battle takes place. Once you get it, you can start looking for the finish, which is where an issue arises. In order to finish you need to be able to move your opponent’s arm behind their back. A knowledgeable opponent is going to use that to block your submission attempt. The main sticking point is that pesky half guard that doesn’t allow you to create the space you need without losing position.

What Chiesa did at UFC 232 was keep an open mind. Even more importantly, he still stuck to all the principles of finishing a Kimura. he just found a really effective way of adjusting and using a one-handed grip to finish the submission. And, keep in mind that he did so against one of the best UFC fighters of the decade in Carlos Condit. Let’s analyze.

It all started when Chiesa caught a Condit front kick and used it to get the fight down to the mat. From there he ended up in half guard and managed to get the figure four grip for a Kimura. Initially, Chiesa went with the conventional Kimura lock finish. However, Condit is a top level fighter and he did all the right things to counter a deep Kimura hold by Chiesa. Since Chiesa already had Condit’s back off the mats, Condit did the smart thing by turning back towards the mats with his back. However, Chiesa was to have none of it and switched to something that nobody, least of all Condit, expected.

First of all, Chiesa used his free leg to trap the shoulder of Condit, before doing anything else. This ensured maximal control over the shoulders of Carlos. This type of innovative control meant he can create some distance between him and Condit without sacrificing positional control. At the same time, he switched his grip to a one-handed Kimura. As Chiesa rose up, he used his now free arm to further block the far hip of Condit. From there he had a pinned opponent and simply extended his arm to finish the now famous UFC 232 one-handed Kimura.

All madness aside, does this one-handed Kimura we saw at UFC 232 have any real application in BJJ? Especially after all the fame, it got in the event’s aftermath? Well, let’s look at just a couple of possible scenarios.

In all fairness, Chiesa finished the submission in a straight armlock fashion, but only because Condit tried to resist to the very end. In grappling terms, there are plenty of modifications you can do to make it really work. With the Gi, for example, you get a great additional anchor point to use for your grip. Furthermore, you also get better options at controlling your opponent. Grabbing the gi at the level of the pelvis on the far side offers immense control. Paired with the one-handed Kimura grip, it all but ensures a 100 % success rate of this brutal submission.

When you’re rolling or competing No-gi, the one-handed Kimura is a great weapon to have. The only drawback might be slipping when you and your opponent are sweaty. However, there’s a cure for that also, and it’s all in the grips. If you want to learn more about the grip secrets of the one-handed Kimura, there’s just one man to teach you. John Danaher has the most comprehensive Kimura instructional as part of his original No-Gi series. “Enter The System: Kimura” DVD set is one of the crucial parts of the BJJ DVD instructional collection that changed the world of BJJ as we knew it.

Kimura Lock Details To Control And Submit Anyone