There are not many grapplers out there with the pedigree that Lucas Lepri has. The Brazilian is one of the best of all times and is also among the most decorated BJJ champions ever. He is extremely well rounded and pretty much the Lightweight king, with more titles in that weight class than any other grappler. Lepri is still going hard and is about to once again give the ADCC a go in just a few weeks’ time. He is also behind a host of BJJ instructionals, mostly guard passing ones that rank really high. In a twist of events, in the Sit-Up Guard DVD, Lepri decides to switch things up a bit and divulge some of his ground game secrets.

ON SALE HERE:
Lucas Lepri – The Sit Up Guard (DVD/DIGITAL)

With Lucas Lepri, what you see is what you get. The 33-year-old is one of the toughest competitors out there, both it lightweight and in the open class. Moreover, he is one of the rare BJJ competitors that have an extremely well-rounded game. Plus, he is just as verse at competing in No-GI as he is in the Gi. As far as his technical inclinations, Lepri likes to use stuff that is proven to work. He has a simple, yet deadly and precise style of Jiu-Jitsu. A great example is his open guard game, that is a puzzle for most of today’s top lightweights. A lot of his game is now broken down and explained in detail, courtesy of his Sit-Up Guard DVD.

Lucas Lepri is a Brazilian Jiu-Jitsu black belt under Elan Santiago, and grapplers under the Alliance Team banner. Lepri has been training since 2000 after he decided to swap futsal and Capoeira with BJJ. He trained at Santiago’s academy from the beginning and got all his belts from Elan. Lepri followed Elan as they went from Brazilian top Team to Terrere’s Team all the way to Alliance in terms of affiliation.

Lucas Lepri got his black belt in 2006 and this is when he really kicked things up a gear. With a record of 110 wins and only 28 losses, Lepri has 7 World Titles in the Gi and three in No-GI, plus European, Pan, World Pro, No-Gi Pans, and many other titles. While most of his titles are at lightweight, he never backed away from grappling with much heavier opponents.

In fact, one of Lepri’s most notable matches came in this year’s European Open. He was the smallest competitor in the entire absolute division and ended up having some of the most attractive matches at the entire tournament. HE choked ultra-heavyweight Renan Vieira in the first match and did the same to 300 lbs Seif-Eddine Houmine in the second one.

Lepri then ended up drawing with Kaynan Duarte in the semi-final, getting the win via a penalty for Duarte. Unfortunately, he had to contend with the silver medal but made history as the first lightweight to reach the open weight final at the Europeans in more than a decade.

A lot of Lepris’ success against much bigger opponents is down to his incredible open guard game. One of the guards he likes to us the most is actually the sit-up guard. After his European adventure, he went on to release the Sit-Up Guard DVD, outlining his ultra-effective guard game.

Review Of The Sit-Up Guard DVD By Lucas Lepri

The Sit-Up Guard DVD is a two-part Lucas Lepri masterpiece, to say the least. It takes a fairly simple guard, that almost everyone gets wrong, and turns it into one of the most potent positions you can use in BJJ. Moreover, even though this is a Gi instructional, this amazing guard system works perfectly in No-Gi as well. Who knows it probably is even going to be effective in MMA if someone gives it a try. That said, Lepri is not just good at giant-slaying but also at teaching Jiu-Jitsu. He has the perfect systematization in place so that everything he covers is clear and easy to connect with other chapters. 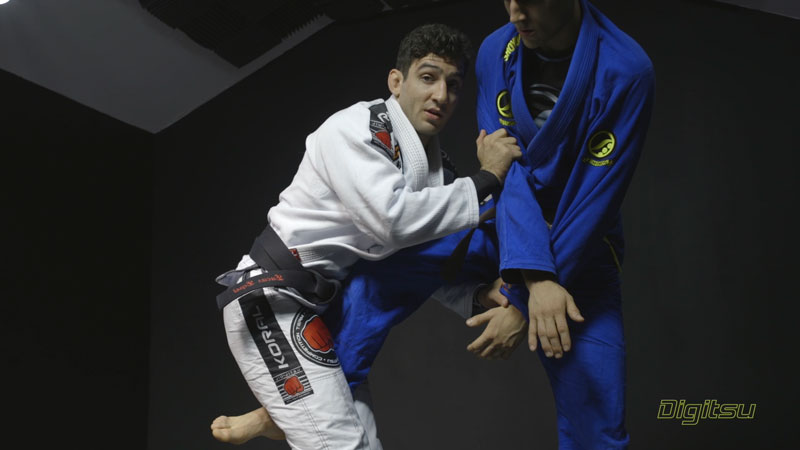 The instructional has two parts, each with a running length of about an hour. Furthermore, each volume has around 15 chapters, organized in a progressive fashion. The chapter is further split into sections that cover similar subjects, like for example shin to shin guard, or pants grips. The first volume covers the cross grips on the lapel and sleeve, before heading to uncover the secrets of the shin-to-shin position. The second and final volume then goes on to explain attacks from the Sit-Up Guard, pants grips and introducing the De La Riva to the system. All in all, the Sit-Up Guard DVD is a straightforward instructional that covers everything you might need in competition in terms of open guard.

DVD 1 begins with an overview of the sit-up guard and a few reflections by Lucas Lepri. After the short introduction, Lepri starts with the first segment which is on the cross sleeve grip. There are two things most people get wrong in the sit-up guard, and the first is grips. The cross sleeve grip si the first option and easiest to obtain. Form there, Lepri covers a few different sweeps, in the form of overhead, single leg and others.

The following section covers the cross lapel grip, which is a bit harder to get to but offers much more control. Once again, the goal here is sweeping, as several different sweeps make an appearance. Basically most sweeps here work as counters against common passes, given the distance. Let’s just say that the knee slide and back step will never trouble you again after watching the Sit-Up Guard DVD. A bonus back take from there just makes things even more interesting.

The final portion covers leg position, i.e. the most common sit-up guard in the form of the shin-to-shin position. Once again, the leg p[osition won’t matter without proper grips, so make sure you got that right first. Options here star with an ankle pick variations before Lepri demonstrates a nasty calf slicer that I immediately added to my game. More sweeps and the mandatory back take complete the first DVD of this Lucas Lepri instructional.

The Sit-Up Guard, as we know it opens up the account in volume two. A sweep, as expected, is the first thing you can do, particularly in a Gi setting. Moreover, there’s also yet another back take to make life easy for you. However, it is the leg drag counter that actually stands out in this section.

In terms of further gripping options, Lepri shares an intricate system of pants grips to further improve control from the Sit-Up guard. Standup sweeps are the norm here, but there’s also a very cool roll sweep as well. Following suit is the De La Riva section. The DLR actually can work as a sit-up guard variation on its own an is extremely offensive from there. There are once again plenty of sweeps but it is the X-Guard to kneebar transition that is the most impressive here.

Finally, remember that there are two things people often get wrong with the Sit-Up Guard? Well, the second is posture. However, it is not your own posture, but that of the opponent. You won’t be able to play any Sit-Up Guard if the opponent has control over their posture. Here, Lepri shares a few tips and tricks to help you deal; with posturing opponents, mostly by sweeping them with eases.

With Lucas Lepri, you get to learn even by just watching him compete. While training with him would be the preferred options, DVDs are not far behind. To that extent, the Sit-Up Guard DVD is probably one of his best so far, particularly as it is on the subject of open guard. There are no real limits to who can practice this guard. Apart from a couple of leglocks, there are no restrictions whatsoever. Plus, the concepts and techniques are simple and geared towards usefulness in tournaments, rather than attractiveness. In other words, the instructional is perfect for anyone.

ON SALE HERE:
Lucas Lepri – The Sit Up Guard (DVD/DIGITAL) 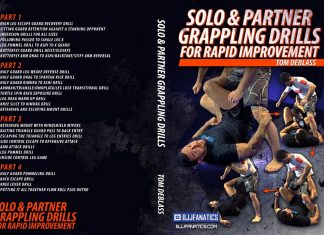 0
The subject of drills for BJJ has been discussed so many times that it seems pointless to go over it again. Yet, we're witnessing...