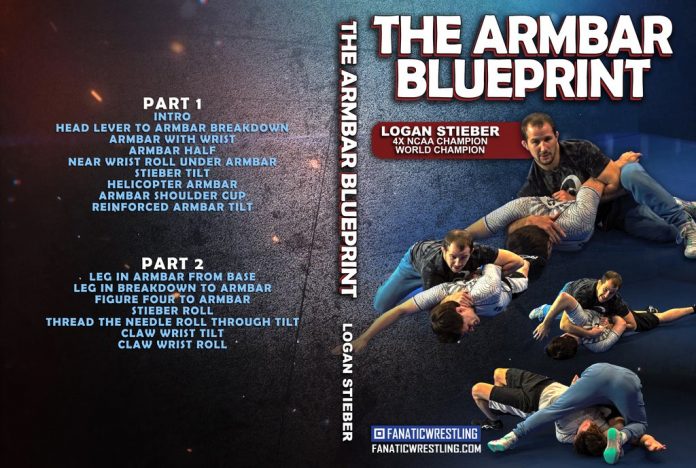 Have you ever heard the term bar arm? If so, then you should know that it is not a typo but actually a staple move in wresting. That said, armbars or bar arms are very similar things in wrestling. However, they’re very different from the usual Brazilian Jiu-Jitsu armbars that we’re used to. These underrated wrestling moves are actually a great addition to anyone’s BJJ, given how few people use them correctly outside of wrestling. And learning them is now as easy as picking up “The Armbar Blueprint” Logan Stieber DVD instructional.

For most of us that are not heavily involved in the grappling world, the name Logan Stiebermight is not a recognizable one. Before looking at his instructional. I had no idea who he is as well. To be honest I never really researched him as I got this one – I liked the subject matter. After going through the first volume, I immediately looked him up. As it turns out, it is no by chance that this Logan Stieber DVD bears the name “The Armbar Blueprint”. He is probably the first person alive to explain to you how traditional wrestling armbars work and how you can integrate them into your BJJ game.

Logan Stieber is a 28-year-old wrestler who has had an impressive career so far. The Ohio born wrestler first competed for Monroeville High School before representing Ohio State. During his time there, he got 4 NCAA titles to his name and built a reputation as a fearsome folkstyle and freestyle grappler. Moreover, he also has a world championship title to his name as well as a world cup and numerous other accolades like Pans.

Stieber is the most decorated wrestler to ever represent Ohio State University to this day. He is also the man that lead the Ohio State Buckeyes team to their first-ever team national championship. Suffice to say, he is a real machine on the mats. His NCAA career ended with an impressive record of 119 wins and just 3 loses. After representing Team USA in 2017 Stieber retired in April of this year. At the moment his focus is on teaching wrestling. Whether or not he’ll dabble in MMA or grappling remains to be seen. However, until such a thing is clear, “The Armbar” Blueprint” Logan Stieber DVD is certainly one way of staying active after retirement. On top of being a coach at Ohio, of course, because they’d be crazy to let him go!

A Different Kind Of Armbar

Speaking of wrestling armbars, let’s make certain things clear. The armbar (or bar arm) in wrestling is not a submission move but rather a control one. It has nothing to do with the takedown portion of wrestling and everything to do with pinning. That said, the armbar knowledge you can get from wrestling can double as both pins and submissions in Brazilian Jiu-Jitsu. Even more importantly, these types of armbars are going to make your transition seamlessly between positions that are not very easy to connect in BJJ.

“The Armbar Blueprint” Logan Stieber DVD is a perfectly balanced instruction that’ll provide you with both basics and a few key advanced concepts. To that extent, wrestlers usually use armbars to help them achieve pins or rides. Wrestlers usually do armbars from the back, looking to immobilize an arm so that they can handle an opponent more easily. The ultimate goal is removing a much-needed limb in order to be able to achieve a pin and get the victory. As such, the armbar can help you unlock certain turtle and top position transitions and attacks that are otherwise not available in Jiu-JItsu.

“The Armbar Blueprint” Logan Stieber DVDis a carefully put together instructional that is suitable for grapplers of all levels. It contains information equally as important to both writers and other grapplers. In fact, even MMA fighters will find something in here that’ll be of use to them. The instructional has two volumes, and each is about an hour long. The way the material is organized is from absolute basics and heading towards some more advanced stuff. Everything is 100 % effective and has been tried and tested by Logan himself.

The first volume contains 9 chapters, starting with an introduction. Most of this DVD focuses on near wrist rolls, which is something that I’ve been using to great success in BJJ lately.  Some more recognizable BJJ style armbars also make an appearance in this one. Part two moves to some more specific stuff, like leg-in armbars and some Stieber signature moves. This second volume has 7 chapters

As this Logan Stieber DVD opens, the introduction takes care of information on both Logan himself and the wresting armbar. DO not expect a long-winded, BJJ-style introduction. After all, Stieber is a wrestler and likes to be quick and efficient. A head lever to armbar is the first technique and it is the best way of explaining what the armbar is all about in the sport of wrestling. Logan offers a complete breakdown of the move and possible applications here.

Going forward, “The Armbar blueprint” DVD 1 goes into the wrist armbars. This is a way of completely rendering an arm useless, by multiple different means of control. the goal is to keep the arm either extended or bent, but almost always behind the opponent’s back. A few near wrist rolls that Logan demonstrates are the perfect example of how effective this move is. A signature Stieber tilt is also there, and it’ll help you deal with turtled opponents a lot. A very cool helicopter armbar is also among the techniques in this portion of the instructional.

The second portion of the instructional, albeit shorter in the number of chapters, does not fall behind in running time. That just means you get more explanation in different chapters, and you’ll need it. The moves here are a step further than the ones demonstrated in the first volume. First up are leg-inс aнd explanations of how armbars can help. To put things into perspective, think of cradles. Virtually these moves are going to help you control an arm, while you include a leg in the mix as well. In other words, you’ll learn how to wrap up opponents in very uncomfortable ties.

For me, the figure-four armbar was really something else. It is in th middle of this instructional and is one of those moves I wish I knew of years ago. Sticking to his signature stuff, Logan also demonstrates the Stieber roll, another move of his own making. Of course, it is quick, unstoppable and 100 % effective. Threading the needle roll precedes a portion on some of the best ground fighting moves wrestling has to offer – claws. A wrist tilt and a roll from a claw are the moves Stieber covers here, wrapping up this awesome instructional.

Although this is a wrestling instructional, the moves in it are more than applicable in BJJ. I’ve managed to execute them after watching this Logan Stieber DVD only a couple of times. Moreover, they work perfectly in both No-Gi and Gi. In fact, they might even be more effective with the Gi, as there’s no way an arm can slip out. “The Armbar Blueprint” is the one DVD that is going to be your secret weapon if you’re a BJJ grappler.