I really do enjoy exploring the different grappling martial arts of the world. Some of them are arts we know of, while others are such a part of local folklore that they remain unknown for most of the world. Grappling arts of the world are not just fun to explore, but also have interesting things to offer Brazilian Jiu-Jitsu. There’s always some tip or trick we can learn from anything. From Sambo to Sumo, from African Laamb wrestling to Korean wrestling, also known as Ssireum, they all have unique traits that might just have a role to play in BJJ.

Today’s focus is going to be on Korean wrestling or Ssireum. With taekwondo being the main martial art “export” of Korea, most people don’t really look into other styles that might originate in that part of the world. As it turns out, Koreans have a very interesting folks-style grappling based martial art that is a unique blend of wrestling and Sumo, with an even more unique set of rules and competition formats. AS such, it is not just entertaining to watch (I dare say more than Sumo, as it doesn’t have as many rituals, and has more action) and it has lots of interesting things to implement in your Jiu-Jitsu game.

History And Origins Of Ssireum

Korean wrestling dates back to the Goguryeo period, which extended between the 1st and 7th centuries. At the time, Ssireum was a pastime that quite a lot of people enjoyed, ranging from peasants to kings. 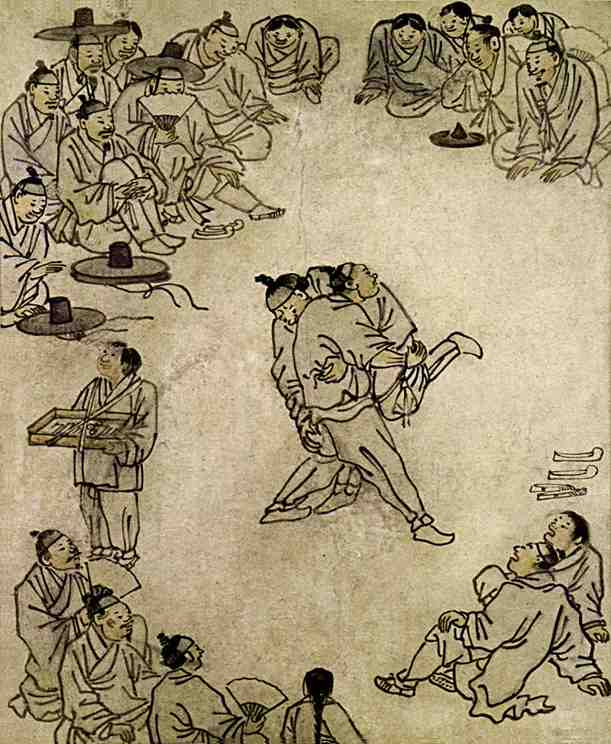 The activity itself also has a connection to the Korean holiday of Dano, or the fifth day of the fifth lunar month. This places most Korean wrestling tournaments in the summer and autumn, in accordance with the holiday. However, Ssireum is not just restricted to these holidays. The popularity of the art is such, that it plays a part in other Korean holidays as well, like the Buddhist All Souls’ day, for example.

Ssireum developed naturally when ancient people had to figure out a way to survive against animals and other humans with their bare hands. As it evolved throughout the centuries, it slowly morphed into a sport and a pastime activity. Korean wrestling appears in many aspects of Korean history, from cave painting to more modern scriptures, outlining the art’s importance as part of the culture.

During the Dano, Ssireum tournaments were held on large patches of grass. Participants showed off their skills, by using pushing, pulling, twisting, trips, body locks, etc to force an opponent to the ground. Even from its earliest days, Ssireum had lots of spectators watching the matches. The winner got a bull as a prize. To this day, Korean wrestling matches are a part of the country’s holiday celebrations.

In 1927, the Pan Chosun Ssireum Federation was formed, as a governing body of the sport in Korea. Since 1947, they have been organizing a National Championship, with two distinct styles of Korean wrestling appearing throughout the years. In southern regions, the Ssirum style was referred to as “predominantly right-handed”, with the left-sided being favored in more northern regions. As of 1994, the left-handed style is the official Ssireum of Korea.

The way Korean wrestling works in a competitive setting does remind a lot of Sumo wrestling. The competitors face off in a circular ring, which is filled with sand. Also similar to Sumo, nothing but the feet can touch the ground. If any other body part touches the ground, the opponent gets an instant win.

From a more unique perspective, both grapplers start the match kneeling and with a grip on the opponent’s belt or satba. Sounds familiar, right?  Both competitors then rise to their feet, still holding on to the belt grip and the match can commence. Contrary to Sumo, leaving the designated ring area does not lose the match, but earns a restart in the middle instead. 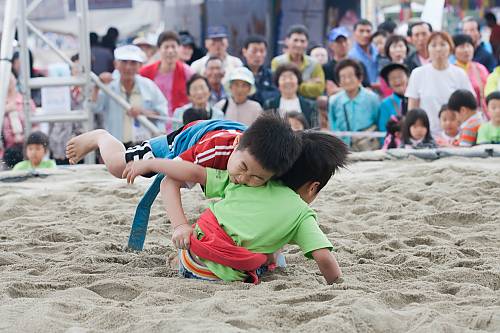 3 referees oversee Ssireum matches, a head referee, and two assistants. The head referee is inside the ring, while the two assistants are placed behind the competitors on either side of the ring. The assistant referees can contest a decision by the head referee if it is not correct, or he cannot render one. That merits either a rematch or a revocation of the original decision. Athletes cannot contest the referees’ decisions.

There are four official weight classes in the sport of Korean wrestling (flyweight, lightweight, middleweight, and heavyweight. Each of them is named after a famous mountain peak in South Korea. Today, there are also women Ssireum wrestlers that compete in Korea.

Further exploring the contrast between Sumo and Ssireum, slaps of any kind are not permitted in Korean wrestling. Also, Korean wrestlers, even the heavyweights (above 160 kg) tend to be leaner than Japanese Sumo wrestlers. The Korean Ssireum Organization, which is the official governing body is responsible for organizing events that include world championships as well.

As if the art itself, from origin to modern version is not interesting enough, there are some facts about Korean wrestling that are quite unique.

For starters, the ring they grappler in is 7 meters and filled with sand. In modern days, the satba (belt) is worn over short pants, which used to be long trousers in the past. There are some requests for getting the traditional trousers back as part of the sport, given that they provide a lot more gripping options and more entertaining matches.

The first televised Ssireum event was in the 1960s, and it brought the sport worldwide exposure. Although Koreans had Ssireum competitions since 1912 (the first was at the Dansongsa theater) the sport never really caught attention until it ended up on TV>

The first time an official Korean wrestling world championship took place was in 2015. Myanmar was the host country, with the Thuwana Indoor Stadium as the venue. The host country ended up winning the tournament, even though Ssireum is not their national grappling sport. It took Korea three tries to win the official World Championship, with Germany claiming the second-ever Ssireum tournament.

Korean wrestling is an interesting blend of grappling rules that could really benefit Brazilian Jiu-Jitsu. It is a pure grappling style, for one, with no strikes available, and a lot of emphasis on grips. Plus, there’s a lot of twisting, shifting, and maneuvering on the feet, along with the belt and trouser grips that do offer a different and fresh perspective to stand up fighting in any grappling martial art. 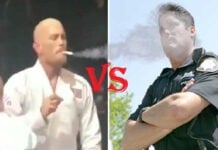