Whether you think a man vs woman is absurd or not it’s going to happen.

It will happen under the special rules of, “no cage, no ropes, backyard rules. It actually means, “everything goes” We’re not sure if there will be groin kicks and eye gouges and similar stupidities allowed, but if a man vs woman is allowed nothing would surprise us.

The main fight of Gender Wars 1 is Tess Barral vs Trent.

Tess Barrall, actually, doesn’t have any MMA experience. She’s a fitness instructor and mother of two. Looks like she just wants to claim the prize of $1,000,000 that organizers of this event promised to a winner.

This event will take place on January 12, 2018 in Russia, as Russia is probably the only country that would allow events like this one. You can purchase the live stream on inplayer.com 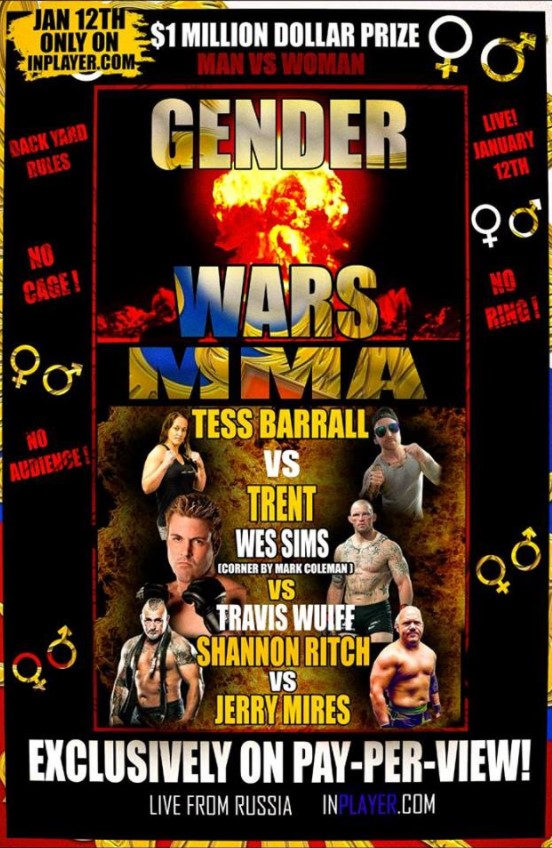 Gender Wars fighting or Woman vs Man fighting is a product of former UFC fighter Brad Kohler along with his business partner, A.J. Hiller.

According to them their idea of events like this is to put and end on debate of Woman vs Man. Just like UFC decided to put an end to a debate of which martial art is the best in the world in 1993 when Royce Gracie won first UFC tournaments.

This duo looked for fighters for more than 2 months. While many were in doubt of them finding a woman to fight, this is what they said about it.

“…we had a contest for both the man and woman, Had over 50 women and 200 men who wanted to compete. We will be announcing on the show where and when the next show will be and who wants to compete can enter and where to enter.”

As you can see there’s more than enough females interested in this kind of fighting. So, if you’re a female and interested in events like this check for requirements below.

How to enter:
Must be a female over the age of 20 yrs old and able to travel.
Reply to [email protected]
Answer these questions below and send us a one minute video telling us about yourself and why should you be a contestant on Gender Wars and how you believe that you could beat a man in a MMA bout.
1) Age
2) Where did you grow up and where are you from.
3) Tell us about your family.
4) Hobbies
5) What do you do for a career
6) How often do you train, what type training do you do
7) Do you have a passport
8) Have yo ever had a armature or professional mma fight
9) What would your friends tell us about you. List three friends and their phone numbers for references
10) If you were selected and won,what would you do with the money.
All questions must have full complete answers with a video attached to be considered

You can check a video of Brad Kohler and A.J. Hiller introducing their first Female Fighter: