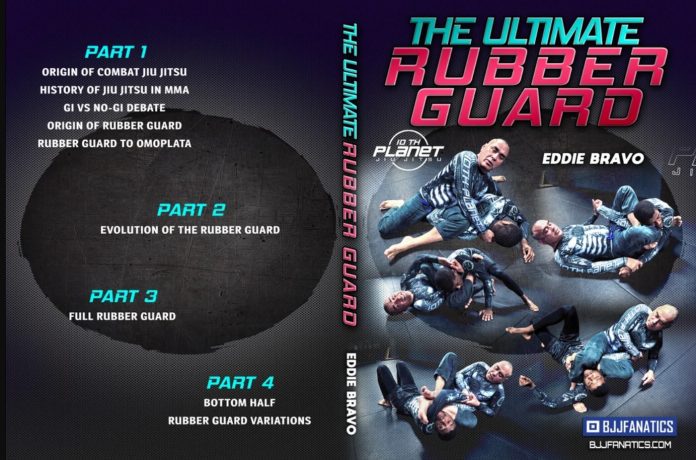 Eddie Bravo is back making instructionals, and his rubber guard is back alongside him. The latest Eddie bravo DVD to come out is the Ultimate Rubber Guard, which is pretty self-explanatory. However, since Eddie Bravo’s last rubber guard instructional is more than a decade old, you could argue this one is long overdue. After all 10th Planet Jiu-Jitsu is booming, and knowing how much Eddie innovates, there is going to be decade’s worth of improvements in this instructional. I’m not a huge fan of the rubber guard myself, but I like Eddie Bravo, so this was one review I did enjoy doing.

The rubber guard has always split the opinions of the BJJ community. Given Eddie bravo’s unorthodox approach to, well, everything, people do tend to take him with a grain of salt. Well, I can vouch that his things work, whether you agree with his philosophy or not. For me, in particular, the lockdown and Truck are huge, and if it wasn’t for Bravo and his innovative approach, modern BJJ would’ve lacked a lot. The same can be said fro the rubber guard, although I don’t personally use it. However, I am reconsidering things, after seeing what this new Eddie Bravo DVD: Ultimate Rubber Guard has to offer.

There’s no denying that the rubber guard is one position that defines 10th Planet a lot more than anything else that has come out of that academy. Stuff like those I previously mentioned, namely the lockdown and truck, as well as the twister is not really completely genuine 10-th Planet positions. They do exist in wrestling and other grappling martial arts, and Bravo has just modified them to fit BJJ. 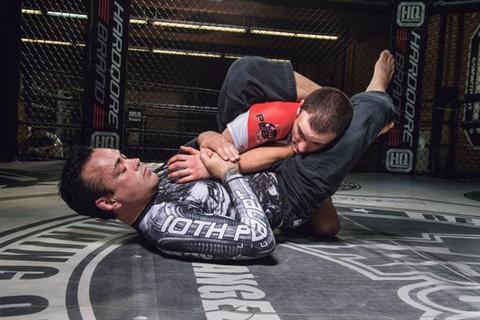 The rubber guard, on the other hand, is a position that’s Eddie Bravo through and through. He invented it as the best possible closed guard for MMA, but it turned out to work perfectly for BJJ as well. granted, the early versions were based on Bravo’s extreme flexibility, but that later changed. Nowadays, Eddie’s rubber guard will work even if you have bad knees or are the stiffest grappler in your academy.

For those that do not know, Eddie Bravo has an online video library where he issues a few online instructionals every month. Over there, you can see how much Bravo has been working on the rubber guard. the unique thing about him is that he employes the help of his students, all of them. he listens to everyone’s feedback and tries to adjust his positions based on peoples’ ideas. That’s the definition of evolution right there. Inevitably, the rubber guard has been developing at an insane rate now that Bravo has students working on it all across the world.

The Ultimate Rubber guard Eddie Bravo DVD is now going to stir the pot even more. Now, one of the forgotten positions of BJJ is making a comeback at the biggest possible stage. I can confirm that the information inside this DVD is about never before seen concepts and moves from the rubber guard. I can also freely say that it is more than worth your time and money. But why not be the judge for yourself?

Eddie’s new DVD follows the modern format of being a 4part instructional. If you take a look back, Bravo’s early DVDs were in a similar format, only with a lot more non-BJJ scenes cut in between the instructions. Now, what we get is a pure Jiu-Jitsu DVD, completely focused on the inner workings of the rubber guard.

The way this Eddie Bravo DVD is organized, though, is again in Eddie’s original way. Namely, two of the four parts have just one chapter, which I guess you might call a title. That’s because Bravo likes to explain everything ina cohesive way, and only divides chapters when absolutely required.  The approach works perfectly for his Ultimate Rubber Guard, though.

DVD 1: Origins Of The System

Once again, consider it is Eddie Bravo doing the instructions in this BJJ DVD. What you get is completely different from anything else you might be used to. For example, much of the first DVD is about history. Bravo starts off with the origin of his latest brainchild, Combat Jiu-Jitsu. He then extends his lessons to what BJJ for MMA is, and how it works in modern times. In both situations (CJJ and BJJ for MMA) he touches upon how his rubber guard fits in and why it works.

Going forward, he covers a subject that always seems to come up when Bravo or 10th Planet is in question – Gi vs. No-Gi. As you know, Bravo is a No-Gi only man, and his entire academy trains exclusively in No-Gi. That said, he does claim the rubber guard works perfectly with the Gi as well, which I find to be logical.

Finally, there’s a bit in there on the history of the rubber guard. More precisely, on its origins and how Bravo came up with the idea. A rubber guard Omoplata example rounds of the first part of the Ultimate Rubber Guard Eddie bravo DVD.

DVD 2: The Evolution Of The Rubber Guard

The second part is one of the two parts in this instructional that ahs only one chapter. In other words, it has a title. Inside, Eddie Bravo covers just one subject. In this volume, it is the evolution of the rubber guard, from the early days and needs, all the way to modern times. Bravo starts with how the original rubber guard intended to be an MMA guard, turned into a staple of his BJJ system. Moreover, he covers the basic positioning and setups from the early rubber guard. 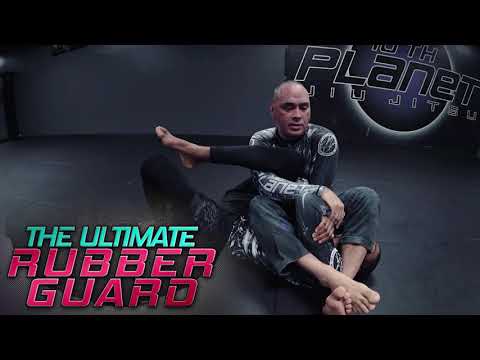 He then moves on to a period of rubber guard that was exclusively in a grappling context. This is where most of the innovation happened, with lots of it being contributions from his students. The rubber guard certainly reached a whole new level between it’s early intended MMA use and the system it is today.

Finally, Bravo covers how the rubber guard works in the brand new BJJ competition setting – Combat Jiu-Jitsu which is halfway (or so) between BJJ and MMA. CJJ does require a different approach to both MMA and pure Jiu-Jitsu. Stil the rubber guard seems to be the one link between the three that is easy to use everywhere, with next to no adjustments.

This is where things get interesting, to say the least. This is where we get to learn the Ultimate Rubber Guard secrets, and how to put it to use today. And yes, this does include BJJ, MMA, CJJ, Gi, No-Gi, and just about anything else you might think of.

Since lots of the basic positioning was covered in earlier volumes, Bravo sticks to his crazy ways of tangling up your opponents until they snap. Literally. Ther are lots of the usual submissions, like the Gogoplata, Dead Orchard as well as staple moves like the Meathook. Yeah, I know saying a Gogoplata is a usual move does raise the bar extremely high. And Bravo does deliver on it, big time. Ther are even crazier things in there, one being the Hindulotine choke. In short, you’ll find a wealth of crazy ways to torture people from the rubber guard in this Eddie Bravo DVD.

Also, there are different ways of entering the rubber guard from a host of positions. Again, there’s a lot of innovation here, even for people used to the old school rubber guard entries and setups. Whether they work or not is going to take a bit more experimentation on my part, but they do make sense. A lot of it.

Finally, Bravo expands into what I like to call a sneak peek in the future. The rubber guard has grown so big, that there are now variations of the guard. IN fact, I had no idea there were so many rubber guard variations. This is the one volume in this DVD that’ will benefit everyone because you get to learn how to do the rubber guard without any athletic or flexibility requirements whatsoever.

Moreover, there’s a part in here that covers the half guard from the bottom as well. While most of the information is about getting to the rubber guard, there’s so key info in there on the lockdown as well. After all, it is a 10th planet DVD, isn’t it?

Eddie Bravo usually has a lot of smart things to say, BJJ-wise. This Eddie Bravo DVD is free of all the usual Eddie Bravo instructional clutter. Conversely, it delivers pure 10th Planet Highest level Jiu-Jitsu straight from the founder himself. The Ultimate Rubber Guard is a DVD that will give you a different outlook on playing the bottom game. And, if you’re thinking about CJJ or MMA, you absolutely have to have this in your collection. Well, only if you like to win fights without getting hit.