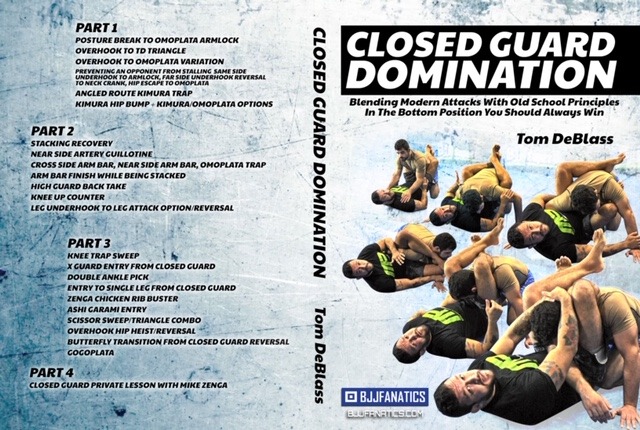 By now, we’re growing accustomed to TOm DeBlassisntructionals popping left and right. Which is a great thing, if we’re being honest! By now, Tom has quite the collection available for all BJJ enthusiasts. So far, Tom has 6 multi-part DVD instructionals that include virtually every aspect of Jiu-Jitsu. He has Gi and No-Gi instructionals, on both guard work, passing and submission escapes, along with a strength and conditioning and nutrition title. Now, Tom Turns to the most basic of positions, giving it a unique twist. The Closed Guard Domination Tom DeBlass DVD just hit the shelves, and it is going to revolutionize the way yo see the closed guard.

Tom DeBlass is one of the most likable BJJ characters out there. Teaching his trade out of New Jersey, he is the one responsible for Gary Tonon, and somewhat Gordon Ryan and their incredible success. On top of it, he runs a very successful academy and is still an active and formidable competitor himself. Oh, and he is a hell of a guard player, regardless of the guard. Put him in half guard, full guard, butterfly guard, and one thing is for certain – you’ll go flying. Now, he offers insight into BJJ’s most fundamental position – the closed guard. The Closed Guard Domination Tom DeBlass DVD is actually exactly what we need in today’s world of spinning and flying nonsense.

IF there’s anything you need to know about Tom Deblass, it is that he is a fan of the basics. He has incredibly strong basics, which mean he can deal with pretty much anyone. AS if that’s not enough, he sharpens his skills constantly with the killers from the Danaher Death Squad and other high-level grapplers that train at Renzo’s.

This approach to Jiu-Jitsu is to be expected, if we’re being honest. After all, Tom is a black belt under Ricardo Almeida, who is a Renzo Gracie black belt himself. You can see why Tom favors the basics of Jiu-Jitsu over the more “entertaining” styles. It is not to say that Tom can’t, or doesn’t do all the modern techniques, but he only adds them to his incredible base. This approach is exactly what makes him successful, unlike people who change their game with every new trend.

Speaking of basics, there’s hardly a more basic position than the full guard. The Closed Guard Domination Tom DeBlass DVD is exactly the instructionals we were waiting for. It is going to be full of innovative ways of executing the fundamental attacks from a foundational position. After all, nobody has passed tom’s guard in both training and competition during the last 17 years. If that’s not impressive, I don’t know what is.

The Closed Guard Domination Tom DeBlass DVD seems to be the second in what we can only hope is going to be a whole series. Previously, Tom issued the Half Domination DVD that focuses on the half guard. Both that and his new release are No-Gi instructionals. Tom is a big fan of No-Gi BJJ, which is a huge bonus for us. The closed guard without the Gi is can be a hard position to play, even if you’re good at it in the Gi.

Tom’s philosophy is that of basics first, and fancy stuff later. To achieve this, Tom likes to be certain he is safe before he focuses on anything else. When you’re playing guard, staying safe means not having to bear the opponent’s weight and shut down any potential passing game. TOm’s guard is a very nasty one because it starts off defensively and then morphs in a very dangerous attacking position. What you can expect from the  Closed Guard Domination Tom DeBlass DVD is a wide array of counter attacks that work off spots where you’re in absolutely no danger!

Furthermore, Tom is a fairly big guy but he is not an ultra-heavyweight. He does, however, like to compete with big guys and he is not the youngest competitor, currently at 36 years of age. So, fighting against the young guns that outweigh him by 20-30 lbs means he needs to have an efficient system to fight off from the ground. And the closed guard is the perfect spot for doing so.

The DVD releasing game is not an easy one. Since Tom releases a lot of DVD’s in a year, we’re all used to a certain level by now. Half of the responsibilities are his, and half are the producers. As far as tom is concerned, he needs to provide quality content. Moreover, he needs to present it in a simple and progressive fashion, so that students of all levels can learn from it. Furthermore, his techniques need to work against high-level grapplers under the pressure of competition. The Closed Guard Domination Tom DeBlass DVD covers all these bases, and then some!

The technical aspects of this instructional are also flawless. Perfect sound, crystal clear video and some impressive camera work make this DVD a real prize!

The Closed Guard Domination Tom DeBlass DVD begins with something very basic – a posture break. You might think that breaking posture is something every white belt knows they should do. However, I doubt white belts know how to break the posture straight into a submission trap. Tom offers a great Omoplata setup that’ll help you keep the posture broken and finish the fight fast at the same time.

The Tom DeBlass take on the closed guard is one rarely seen today, which only gives this DVD that much more credit. Tom goes for the overhook closed guard, setting up all sorts of things, like triangles and arm locks from there. He also offers some really advanced concepts as to how you should act when an opponent stalls the underhook.

Of course, it wouldn’t be a Tom DeBlass DVD without some wicked submissions from the very beginning. Tom demonstrates some very slick arm locks in the form of Kimura and Omoplata combinations. Keep an eye open for the neck crank, though, as it’s going to become a real favorite instantly!

The second volume is all about the defensive side of things. Not that the counters from the first volume are going to fail you, but simply because Tom likes to offer options. HIs experience and unique mindset make him one of the best instructor in the world of BJJ today. This is clearly apparent in the second volume, where he offers by far the best stack defense I’ve ever seen.

However, his efforts do not stop there. Amazing guillotine details follow his arm locking secrets, along with, surprise, surprise – more armlocks! The Closed Guard Domination Tom DeBlass DVD is full of bent armlocks, mostly in the form of omoplatas. This makes it perfect for even the most advanced BJJ students.

And, of course, that Danaher connection is also apparent, with leg attacking options from the closed guard, of all positions.

The third volume is where things get crazy. Yup, it was all fundamentals and basics until now. Here, Tom starts the offensive guard game. It includes crazy effective sweeps, Ashi Garami entries, and even Gogoplatas. There’s no way I could do this volume enough justice just by writing about it. It is something you have to see. there are some crazy-effective combinations of basic moves that even black belts can’t prevent. Take the very fundamental scissor sweep-triangle choke combo for example. We’ve all attempted it at some point or another, but now Tom provides details and adjustments that’ll change the way you’re looking at it forever!

Have you ever wanted to take a private class with Tom DeBlass? Well, now you can. We’ll not really but you can get the next best thing – a recording of a full private. The final chapter of the Closed Guard Domination Tom DeBlass DVD features a private class with Michael Zenga from BJJ Fanatics. It is the perfect way of finishing, by going over everything explained previously in a private lesson that includes some masterful tips and a mind-blowing Q&A.