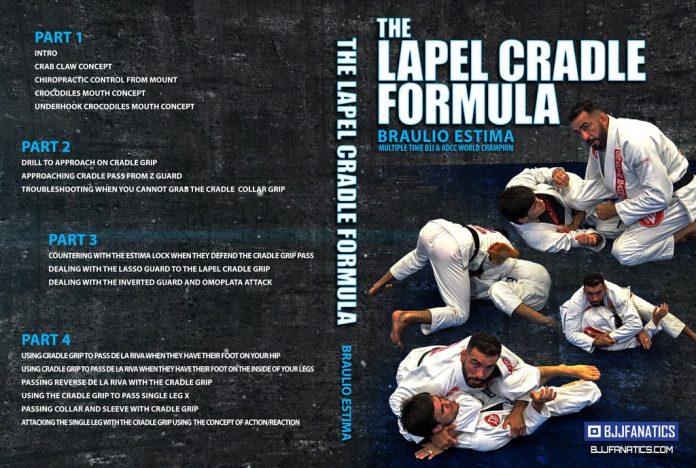 It has certainly been a while since I’ve looked at a Braulio Estima DVD. Back when I was starting BJJ, I often looked into one of his then popular releases. Not that it made too much sense to me as a white belt, but it did help. He had a few online stuff covering things like the D’arce choke, but never really committed to doing another full-length BJJ DVD instructional. Well, finally, Braulio seems to have changed his mind. It may be his brother Victor and all the stuff that he is putting out, but there’s a brand new Braulio Estima DVD out there called “Lapel Cradle Formula”. As usual, we have the first review!

Where do I even begin with what Estima offers this time around? Once again, his instructional is a highly specialized one. And yet again, it is a highly effective one, particularly as it tackles a subject that is very unique. The cradle is one of the top moves you can do to keep someone uncomfortable on the bottom, whether it is wrestling or BJJ. The trouble is, you can’t really do much more. unless you include the lapels into the mix. then, you have a winning formula that for now, only Braulio had at his disposal. Well, “The Lapel Cradle Formula” is now out and this brand new, four-part Braulio Estima DVD has all the information you’ll ever need.

A far as legendary, old-school names in Brazilian Jiu-Jitsu go, Braulio is an unmistakable one. He is one of the top people in Gracie Barra at present, being a Carlos Gracie Jr. black belt. In fact, he is a 4th-degree black belt and multiple-time world champion. Also known for the Estima lock that he developed alongside his brother Victor, he is also one of the top competitors of all times and an incredible coach.

As far as his competitive career goes, Braulio has three IBJJF world titles and one UAEJJF world championship. Moreover, he has a double ADCC title from 2009, along with several European, Pans and plenty of other titles. In short, he has won everything of worth out there when he was active. During his competitive career, he was also in the center of some controversy, testing positive for PEDs and losing his 2014 IBJJF world title a result. Braulio also tried his hand in MMA for a while, fighting in Titan FC.

Currently, Braulio lives and teaches in England, and is obviously on the path of some very welcomed innovations. His way of passing the half guard is unique, to say the least. As it turns out, it is a blend of moves from different grappling arts, coming together in the Lapel Cradle Formula Braulio Estima DVD.

Before I go on, a few words on the cradle position. In wrestling, the cradle is one of the premiere pinning position since it provides both upper and lower body control. There are several ways of obtaining it, although only two are applicable in BJJ – the near side and far side cradle. As such, the cradle is the perfect weapon to use against the half guard. However, given its wrestling background, it is all about No-Go, and people often find it hard to set it up when the kimono gets in the way. As a huge fan of the position, I can attest to this issue.

What this Braulio Estima DVD does is provide an answer to all cradle issues in regard to its use in Jiu-Jitsu. As it turns out, with just a few minor, but important grip adjustments, you can turn the cradle in one of the most powerful passing systems out there. In fact, if you throw in lapels into it, you get a real winning formula, one that’ll never fail you in half guard. Suddenly, thanks to this new Braulio Estima DVD, the cradle is not just a wrestling pin anymore. The “Lapel Cradle Formula” is the perfect answer to passing the half guard in the Gi, but it also offers much more than just a pass.

As expected, Braulio is up to date with the modern BJJ DVD instructional format. This Braulio  Estima DVD follows the recognizable format of a four-part instructional, with clear progressions and in-depth explanations. As with all other similar releases, the material is available in both DVD and digital format.

The entire set starts off with a short introduction, before covering some interesting stuff along the lines of the crab claw and the crocodile mount in the first volume. The second one has a few key drills in relation to cradle grips and some cradle basics. Past halfway, in volume three, Estima goes over some common counters to lapel guards that ht are used as counters. In the final part, the focus is on passing a whole host of open guards with the cradle gripping system. As I said, much more than just a half guard passing DVD.

In the opening section, there’s the inescapable introduction that kicks this instructional off. From there on, though, Braulio heads straight into some of his original moves that sound, well, crazy. In essence, they’re just as nutty as they sound, but boy do they work! There are several key concepts here, like the crab claw which is basically a cradle position without gripping your hands together. Crazy, I know, but it works.

The rest of the chapters on this DVD covers some crazy mount concepts that are going to completely change your mount game. The chiropractor control and crocodile mount are stuff that I can’t really explain here. You’ll have to get the DVD and check them out. I can just say, they’re the perfect tools to confuse everyone, black belts included.

After covering a “gripless” variation of cradle control in the first volume of the “Lapel Cradle Formula”, Estima goes on to explore the intricacies of the cradle grips in the second part. Here, he covers the basic wrestling cradle grips first. Then, he reinforces and reinvents them by introducing Gi grips, and some lapel craziness into the mix. This is what makes this Braulio Estima DVD really stand out among other “cradle for BJJ” instructionals.

The remaining two chapters of the second portion are about setting the cradle half guard pass. First up, is dealing with the dreaded Z guard, via establishing the cradle grips. The final one covers some troubleshooting in situations when collars are not available for gripping. In other words, Braulio covers just about every contingency you can think of and several you can’t even imagine.

There’s some true Estima brothers craziness in this third volume. I have to say, this one is by far my favorite of this Braulio Estima DVD instructional. The very first chapter is a way of dealing with people that attempt to defend the lapel cradle pass. And that way is by using an Estima Lock to tap them quickly and cleanly.

However, options do not stop there. The lasso and inverted guard are common modern ways of attempting to block the cradle pass. In certain situations, they can be successful. So, Estima went above and beyond, offering counters to both, as well as a sneaky Omoplata counter that ends up right back in the cradle pass.

The final chapter of the “Lapel Cradle Formula” Braulio Estima DVD contains more chapters than any of the previous three. In it, Braulipo moves on from the half guard and focuses on cradling people that play different open guards. These include the De La Riva, Reverse De La Riva, Single leg X, collar and sleeve guard, and a few others. Estima offers both direct attacks, as well as some intricate advanced concepts that are meant for higher belts. In any case, the stuff is pure gold, at least as far as I am concerned.

Wrapping up, go and get this Braulio Estima DVD. I’m not kidding, even if you do not like the cradle, you need this passing system in your life. If you are training with the Gi more often than not than this is mandatory instructional. Even if you’re not, the lapel Cradle Formula will over new insight into using the cradle fro the purposes of Brazilian Jiu-Jitsu. Not to mention the level of teaching that’s unique to Braulio Estima only.