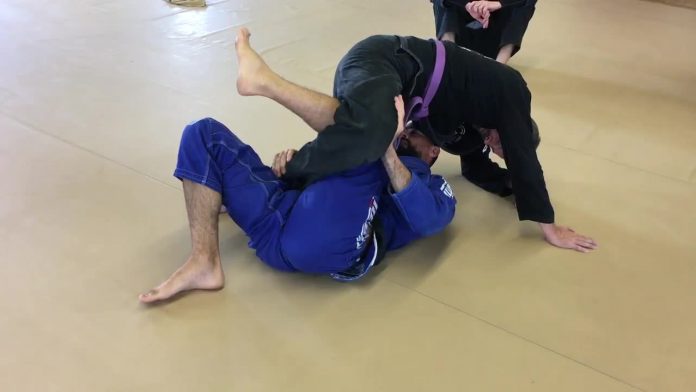 Outside Ashi Garami, straight Ashi Garami, 50/50, Honeyhole, Inside Sankaku, Game over, Truck… The list of leg locking positions just goes on and on and on. All of them work, although some work way better than others. For that reason, people usually flock to stuff like the Inside Sankaku AKA Honeyhole given the success rate and available submission from there. Well, there’s another one to add to the mix. The BJJ bear trap is not something most people associate with an Ashi Garmi. If you take a closer look, though, you’ll notice that it connects perfectly to any Ashi Garami positions, plus offer lots of leg locks. So far, you’ve probably just done it as a calf slicer, Now, it is time to start using it correctly.

The BJJ Bear Trap is one of those spots where you can actually chill out. It seems like it is unstable at first, but once you get someone there, there’s a predictable pattern of events. First, they’ll struggle like a fish on land trying to squeeze out. Then, when they realize they can’t slip out, they’ll settle down, trying to solve the position calmly. That’s exactly when you pair it with some attacks of your own, mostly in the leg lock department. It is a full-blown control position that you can use to both control a match, or transition into better spots, Ashi Garami or otherwise.

Contents hide
What Is The BJJ Bear Trap?
How to Get To The BJJ Bear Trap
Half Guard
Ashi Garami
Butterfly Guard / X Guard
50/50
What Can You Do Form There?
Calf Slicer
Sweeps
Heel Hook
In Conclusion

What Is The BJJ Bear Trap?

In essence, The BJ Bear Trap position is a calf slicer spot from the bottom, while the opponent is pretty much “hovering” over you. In most usual cases you can get to the position when someone uses rotational escapes against your Ashi Garami. It doesn’t matter which Ashi Garami it is, when someone rotates out, the Bear Trap is seen as the last resort way of tapping them with a leg lock. It doesn’t have to be that way since the position can actually be used to return you into tighter Ashi Garamis.

Let s use the Ashi Grami as an example. Whenever you’re hunting for leg locks, people will try to spin out. It is a common problem of paying the leg lock game. Unless you have a solid connection, in most cases, they’ll even succeed. So the solution is to use the shin of your leg to place it in the bend of their knee as they turn away from you. The goal is to cause the leg to bend and then lock up a triangle with your legs to keep it that way. You have two options from there. Either sit up and hug the opponent’s waist or let them come on top, not knowing they’ll only get stuck worse that way.

As far as the position goes, that’s it. You can pull it off in the Gi and No-Gi and there’s no real philosophy to it. The calf slicer is painfully obvious but what if you decide to hang there for a while? Well, that depends on your positioning. All you need to remember is that you need to use your arms to connect and stop your partner from simply sliding out. You might want to hug the hip, hug the opposite side thigh, control the foot or even use lapels to tie everything down. In any case, once you have the legs and grips in place you can have all the fun you want from the BJJ bear trap.

How to Get To The BJJ Bear Trap

The interesting part about the BJJ Bear Trap is not really what you can do from there, but how you get there. Entries are very versatile because they’re available from just about anywhere. You might get into it from any guard out there, although some work better than others. You might even consider going there if you’re’ on top, caught in the De la Riva guard, for example. Whatever the situation, you can easily rely on the bear trap.

The half guard is a great spot for launching the BJJ Bear Trap. To be more precise, the butterfly half guard is the preferred option. The main goal is to get your opponent on top of you by using the butterfly hook and underhooking their free leg with your arm.  How? Just lie on your beck and it’ll all fall into place. From there, the next step is lifting the far leg so that you can entangle it with your legs to get the Bear Trap. You already have a high grip on the other leg, so you can start having fun.

We did already cover how to get in the Ber trap from an Ashi Garami. What is important to know is that you can lock the BJJ Bear Trap both on the outside and the inside. That means that there’s no Ashi Garami variation out there that doesn’t eventually lead to the Bear Trap after an opponent spins. A cool trick is actually going to the Ber trap intentionally when an Ashi Garami isn’t tight or set up correctly. You can either work from the bear trap or, as you’ll see later on, move back to a proper Ashi Garmai and finish from there.

The butterfly guard is the most popular open guard among No-Gi players nowadays. Not that it was ever unpopular. That said, it is also the launching pad from a whole host of leg lock attacks. So much so, in fact, that people now try and use pummels and other counters to fend off leg locks. The BJJ Bear Trap is an easy solution to this particular conundrum. When you go for a standard butterfly sweep, regardless of side, orKuzushi, opponents often post to remain in balance. All you need is a brief moment of weightlessness for one leg, just enough to sneak your bottom leg out. Then you’ll use the hook to lift the hips and clamp the bear trap.

The same setup works pretty much from the X guard. In fact, you could go for the reverse X and try to get the Honey hole. If that fails, the Bera trap is already there, waiting.

The 50/50 guard is one of the most common options for getting the Ber trap. To be honest, it is also one of the best possible outcomes. Passing the 50/50 against a skilled ponent is a nightmare. You can just end up stuck there for ages. Instead, going to the BJJ Bear Trap will allow you to hunt for leg locks from a safe position. Or you could sweep and come on top without much fuss. All it takes is for your opponent to lift the entangled leg, which you can easily get by going for a leg lock. Once they do, spin halfway, clamp the legs and you’re in the Bear Trap.

What Can You Do Form There?

This is where things get really interesting. I’m sure lots of you have done the calf slicer, but there’s so much more to do from the BJJ Bear Trap. In fact, there’ a lot to unchartered territory there too. I have pulled off some crazy submissions by just experimenting. I’ll need to fine-tune some of them before writing about it, so instead, I’ll share a few proven ones here.

The calf slicer from the Bear Trap is extremely easy. In fact, sometimes it’ll just come on by itself, given that the position itself is more than half of the submission. To get a tap against stubborn opponents, you’ll need to apply a little more pressure. Hugging the hips is a great way of achieving that. One thing you can do si keep the opponent on top of you, and hug the hips, Another option is to let them get to their knees and sit up for the hug. The latter is a tighter option. However, one thing to look out for is a counter toe hold on your top leg, which makes option umber one the safer one. In any case, for a strong finish remember to rotate your shin outwards, rather than just try to squeeze. It’ll get a tap without failing.

Sweeping is easy in literally every direction with the BJJ bear trap. Just as an example I’ll use a very cool Gi sweep from the position. Once you have the opponent on top of you in the bear trap, you can start working on your sweeping grips. First up, you’ll need control of the far lapel. The aim is to loosen it up and thread it between you and the opponent. Then, you pass it to the arm that’s around the thigh of the free leg. But that’s not all, You actually want to pass the lapel back to the initial hand, once you’ve threaded that one underneath the thigh. From there you turn to your side, towards the opponent, and get up sweeping them with ease.

Finally, if you’re looking to get a heel hook finish from a stronger Ashi Garami you can always use the Bera trap to re-enter, or as the initial entry point. The aim here is to actually attack the free leg. Form the BJJ bear trap, simply extend your hips .this will force the trapped leg, and the hips of the opponent away from you, allowing you aces to the free leg. Untangle the bear trap, throw your leg over theirs and you have an Ashi Garami. Whether you had to the Honeyhole, or slap on a triangle for Game Over is down to you. And you already know heel hooks from there, right?

The BJJ Bear Trap is the long-forgotten Ashi Garami. It offers everything other Ashi Garami positions do: submissions, sweeps, and passes. Moreover, You can also transition everywhere from the bear trap, and get to it quite easily. The most interesting thing is that people often put themselves in a position without knowing the dangers. That just makes your job that much easier.