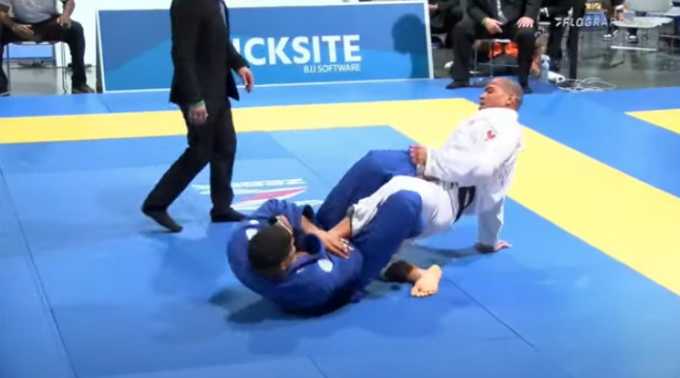 After the IBJJF Masters worlds win of Victor Hugo over Mahamed Aly by submission, there has been a ton of controversy over how legitimate the submission was.

Under IBJJF rules, during gi competitions, it is illegal to use a twisting leg lock that would put pressure on the knee. The reason why there has been so much controversy surrounding the finish is that Mahamed Aly’s foot was twisting at the end of the sequence.

Immediately after the submission, we can see Mahamed Aly protest to the referee but it was determined a straight ankle lock. It certainly did look like a straight ankle lock by looking at Victor Hugo’s posture but there was a twisting of the ankle at the end resembling an “Aoki Lock“.

The controversial part of all this is determining whether or not it was intentional.

In fact, Gordon Ryan also commented on this finish with the following statement:

“I’ve seen this move done in IBJJF and be perfectly fine and I’ve also seen people do it and get DQ’d. IBJJ Doesn’t know if it’s legal or not. How can we?”

Should have Victor Hugo gotten disqualified?

The truth is, nobody but Victor Hugo knows if the twisting of the foot was intentional. It did seem like he was going for a straight ankle lock. But on the other hand, even if his intentions were good he should have faced consequences.

It seems like the referee never saw Mahamed Aly’s foot get twisted, so he went on what he saw and not on speculation. Which is honestly the best anyone could do in that situation.

It is not really up to the competitors to determine if that move is legal or not, the IBJJF needs to get very clear on this so that there is no further confusion. Until they do that, there will still be a lot of controversy around these kinds of finished.

What do you guys think?

A big congratulations to both Victor Hugo and Mahamed Aly for their amazing performance in the IBJJF Masters worlds.