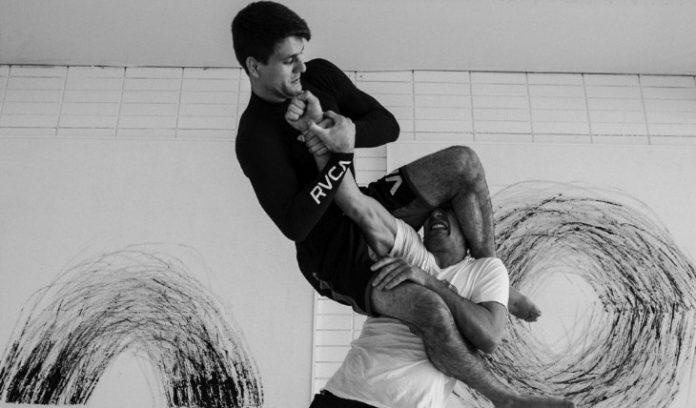 Have you ever tried a flying armbar submission? Of course, you have, even though you might not have done any actual “flying”. Flying submissions appeal to us all, and the flying armbar ranks the highest on that list. The curious thing is that it is mostly white and blue belts that are attempting it, with a few purple belts actually being able to pull it off. Among brown and black belts, there doesn’t seem to be much interest in flying, with a few exceptions, of course. All in all, flying armbars can be effective and they most certainly are attractive. However, they are also quite hard to master and bring about a level of risk that borders on unreasonable. No wonder people love them.

The first moment you see a flying armbar, you go “Wow”! Your very next thought is usually “I want to do this too”! The move is pretty acrobatic and one of the most attractive ways to get a submission. Normally, everyone wants to do it. However, it is also very easy to see that there are risks involved for both people. That’s precisely why executing the flying armbar can be really difficult. There’s a certain amount of fear that comes with every attempt and that only makes things worse. There have been many examples of people suffering debilitating injuries as a result of flying submissions gone wrong. That said, there is a safe way to do the move, but you have to understand that there will always be a level of risk.

The Seductive Nature Of Flying Submissions

Who doesn’t want to fly through the air, end up wrapping a submission hold on an opponent, and come down to the ground directly getting a frantic tap? In BJJ and MMA I’d say most people wouldn’t mind having such an ability in their toolbox. The options are certainly out there. So why aren’t we seeing too many flying submissions at tournaments, all levels included? The answer is – fear.

The flying armbar, as arguably the most efficient of the flying submissions, has a lot of technical details. It is not a Hail Mary move that you just hope works when you jump in the air. Quite the contrary, the fact that you’re “flying” makes technical nuances extremely important. It also makes people abandon caution and tries to push through the fear in a hunt for very attractive submissions.

Flying submissions, including the armbar, are actually efficient moves. They catch opponents by surprise, they’re impossible to defend when done right and have a high percentage of success. Again, it all depends on setting things up correctly. However, unlike a mounted armbar, for example, you don’t have time or space to adjust after you launch for a flying one. This means that you’re sacrificing a lot of control for the reward of adrenaline high from throwing your entire body in the air in order to submit someone. I won’t deny it is exhilarating, but it is not always worth it. In fact, I can’t think fo a legitimate reason fro attempt[ting a flying armbar apart from it being cool.

The only way to get good at flying submissions is to figure out a way to practice them safely. With the flying armbar, looking to go for a guard pull with armbar grips is the first step. Gradually move over to the jumping guard, before finally trying the flying armbar submissions set up in full.

When you come to think of it, the flying armbar is actually not a technically difficult move. The first lesson you have to remember, though, goes directly against what most people think the submission is about. That lesson is “Don’t fly”. Yes, you should not aim to fly when doing a flying armbar, but rather look to drop.

The best analogy I can use here is a guard pull. The flying armbar is essentially an “armbar pull” if we can call it that. The unique thing is that both your feet are off the ground, meaning you are completely suspended in the air at a certain moment during the setup. And that’s the second most important lesson in setting up the flying armbar – spend as little time as possible off the ground. With those two huge lessons learned, you can move forward to the technical aspects of the move.

Technically speaking, it all starts with grips. You have to have strong ones, placed at the correct spots to ensure you won’t come crashing down. The grips constitute a sleeve grip at the triceps level, a collar grip on the same side.  For the motion, you need to use one leg to push off the ground, looking to post the other leg on your opponent’s hips. Whether you place your shin over their belt or a foot on the same side hip, has to do with the type of armbar you want to finish with. It won’t affect your “flight”.

Finally, as you place the leg on the hips, the leg used to push off the ground goes up in the air, following the momentum you created. The goal is to get your butt as close to their hip as possible while swinging the back leg over their head. It should be the force of gravity that pulls the opponent down, meaning you need to hang on tight. Otherwise, you’ll drop like a stone and bad things can happen.

There’s no way of phrasing this differently. The potential for injuries during a flying armbar is off the charts, compared to other BJJ moves. It is right up there with takedowns, and the only reason it is not topping the list is that people don’t go for flying submissions as often as they go for a takedown.

The potential for injury is actually quite similar for both people involved. In the earlier stages of the move, putting a post or grip incorrectly or mistakes in launching yourself carry a lot of injury potential to the person executing the flying armbar. Past the halfway mark, with everything set up right, most of the risk is with the person whose arm is the focus of the attack. In that sense, safety should be of the utmost importance in doing the move, for both training partners.

There are several critical control points that you need to pay attention to. For example, if you just can’t seem to figure out the timing of your opponent’s movement, you’re probably better off abandoning it altogether and going for something else. Moreover, know this: once you start “flying” you must not change your mind about the move. The moment both legs are off the ground you’re much better off dedicating to the move rather than re-considering in midair or trying it halfheartedly. That is the recipe for disaster, for both you and your training partner/opponent.

Finally, as the person doing a flying armbar, you need to be careful with the submission itself. That goes for every submission hold, but with flying ones, it becomes much more important. Remember that you should only pressure on the elbow once you’re safely on the ground. Attempting to submit someone during the transition is a great way of causing real damage to their arm. That is a great way to lose lots of training partners in just one move.

If you want to go for flying submissions, you certainly can’t. You just have to make sure of two things – never attempt them without getting proper instructions by someone that knows these types of moves. Furthermore, be sure to sacrifice the success rate for safety. If these are your primary goals, you’ll notice that you’ll actually end up getting more taps with a flying armbar, as opposed to just “winging it”. Pun intended.