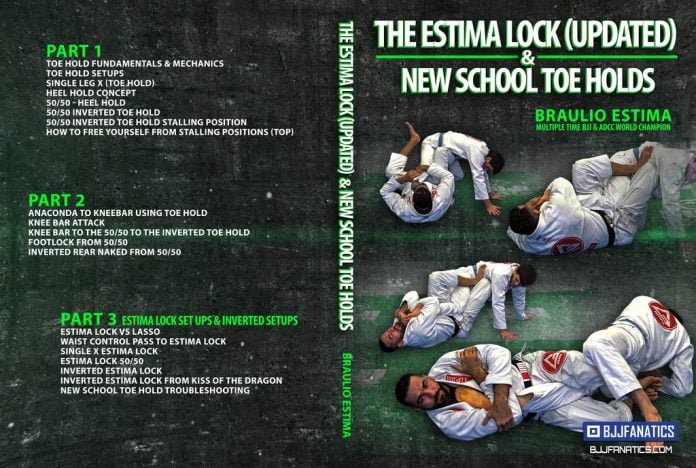 Braulio Estima is back, everyone and he has a brand new instruction out on his best move – The notorious Estima Lock! IN fact, he is back with a bang, covering not just the updated Estima lock, but also a bunch of brand new toe hold setups. In fact, his DVD ‘The Estima Lock And New School Toe Holds” is the most complete 4 part system in the world when it comes to this particular leg lock. It is not just an Estima locks DVD and not just a toe hold instructional. It is the perfect blend of both, offering a system that combines the unbeatable nature of the toa hold with the quick brutality of the Estima lock. And the best part is that every leg lock shown in this instructional is 100% IBJJF legal!

Braulio Estima is a true legend of Brazilian Jiu-Jitsu. The Gracie Barra top competitor is still going at it strong, despite being on a competitive hiatus. Braulio and his bother, Victor are always innovating, mainly in the submissions department. In fact, it is Braulio who is behind the reverse triangle we all love to use from the bottom side control position. A few years ago, Braulio and Victor also came up with the Estima lock, a devastating leg lock that Braulio used to win the ADCC in 2009. Now, ten years later, there’s a brand new instruction on the subject. ‘The Estima Lock And New School Toe Hold” DVD is a real special, even by the standards of Braulio Estima.

The Estima brothers re certainly an interesting pair in Jiu-Jitsu. They’re both high-level black belts under Carlos Gracie Junior. Currently, among the leading members of Gracie Barra, both brothers are extremely busy spreading Jiu-Jitsu across the world. In fact, it has been some time since we’ve seen them compete. Moreover, both have instructionals out, but similarly to competition, they haven’t produced anything of note lately. Until now.

Braulio at 39 years-old is the older of the pair, with Victor 5 years his junior. Initially a Judoka, Braulio discovered BJJ at 16 alongside Fernando Cavalcanti. He trained ina gym in which eventually, Ze Radiola would become an instructor. Under his tutelage, Braulio went on to compete under the Gracie Barra banner, winning 3 IBJJF World titles, 1 UAEJJF World title, the ADCC as well as three European titles.

His younger brother Victor followed Braulio on his path. He first trained Judo with his brother, before eventually ending up in BJJ in Braulio’s footsteps. When he started, he was only 12 and the youngest at the academy. That got him to lose the desire to train and he stopped for a while, but not for long. Victor is also a World Champion, albeit in No-Gi, as well as a European Champ. In all fairness, he is considered to be the original inventor of the Estima lock.

The Estima lock, or the most devastating legal leg lock ever, actually came into existence purely by accident. As Braulio Estima was getting ready for ADCC 2009, he was practicing a lot of inverted guard attacks. As the two brothers sparred, Brauilo’s inversions proved an annoyance for Victor. So, as he did his inverted guard, at one point, Victor instinctively reached for an exposed foot. He applied a rear-naked choke grip to it and the Estima lock was born. IT turned out to be so great, that Braulio immediately added this leg lock to his arsenal. Suffice to say, he caught everyone by surprise, winning both his division and the absolute at the 2009 ADCC.

The submission is basically a toe hold, but one that is legal before you reach the brown belt. In fact, I think it may still be legal even at white belt. IN fact, the way VIctor set it up is b trapping one of Braulio’s legs while he was spinning. He simply placed a rear-naked choke around his ankle. The force of the submission comes from the belly, where the foot of the opponent lies. IT takes very little force to get a very quick tap or very nasty break. It is definitely something worth considering, particularly now that”The Estima Lock” DVD is out and about.

First up, The Estima Lock DVD does not start with Estima locks. Instead, Braulio Estima gives us a brand new look at toe holds. Apart from heel hooks, toe holds are definitely the most effective leg lock you can hunt for. this is due to the twisting nature of the submission, as opposed to straight foot locks and kneebars.

Chapter one is all about the mechanics of the toe hold. Straight after, Estima covers his favorite toe hold setups, which are all proven to work. What I really loved is the single leg X guard toe hold setup. I already gave it a try and I won’t be giving it up any time soon. Also in part one, you get a look at a brand new leg lock in the form of the heel hold. There’s some crazy valuable information in here, particularly form the 50/50 guard. The best chapter has to be the one that solves the stalling puzzle form the 50/50.

Kneebars are also high percentage leg locks, although they can prove to be hard to get. Wel, Braulio Estima covers precisely this portion of kneebars. he focuses solely on setups that are quick and will help you catch even experienced grapplers. One example is the transition into a kneebar from a toe hold. What’s really impressive is that the entire sequence starts from an Anaconda choke.

Once again, the 50/50 guard makes an appearance here. However, as you’ll see, Braulio likes to tie the kneebar with other attacks every time he goes for it. That is precisely why it works so well for him. From the 50/50 he uses an inverted toe hold threat to get the kneebar. A straight footlock and a crazy rear-naked choke bring this volume of The Estima Lock DVD to a close.

Braulio Estima definitely saves the best for last. The Estima Lock DVD requires some patience until you actually get to the Estima lock. However, it is worth the wait as ll previous things lead there. There are not many new details on the finish- not that the submission needs them. We already know it works. Instead, the focus here is on setups and covering new positons for attacking with it.

The first position is the lasso guard. Although this is the most common position for the Estima Lock, there are still some new details that are incredible. Single X and 50/50 guard setups follow, along with a way to hunt for the Estima lock form a waist control pass. The brand new take si the inverted Estima lock. ti seems the Estima brothers have been busy working on this particular aspect of the lock. it is brutal and even faster than the original version. Finally, there’s a new school toe hold setup and key troubleshooting tips and tricks.

Just when you start thinking that the Estima Lock can’t get better, Braulio and Victor re-invent it. They did not just improve the old version but developed a new inverted one. Moreover, this Braulio Estiam instructional covers a bunch of leg locks, mostly toe holds. Similarly to the Estima lock, these contain both classics as well as innovative setups and mechanics. This is a new school style leg locking instructional from a true old SChool legend of the sport. Get it, you won’t regret it!