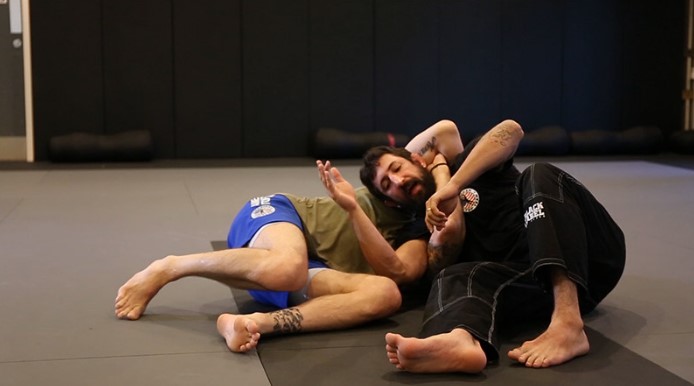 This DVD is one I have really mixed feelings about. The reason is that I am a huge fan of the Darce choke and it is one of my main submissions. In fact, I have been working on it for the past 5 years. However, I have to share this instructional with everyone as it really is a genuinely effective one. The reason why I said I have mixed feelings is that the Darce Killer DVD is an instructional on Darce defense. Normally I would laugh it off, but the moment I saw it, I knew it was more than legitimate. Malachy Friedman really hit a home run with this one, and I’m certainly looking forward to finding ways around these crazy effective Darce defenses.

If you really want to learn how to defend a move, my advice is to learn the move itself. Well, I never really had to learn to defend the Darce, as I was always the one attacking with it. In fact, I still am, on a very regular basis. That said, as someone who specializes in the choke, I can instantly tell you whether a defense move will work or get you into more trouble. In fact, there are a bunch of ways to counter early and late defenses, as well as counters to the Darce. However, now that the Darce Killer DVD is out, the landscape has changed. Malachy Friedman has found several ways to ensure no Darce is going to work against you. And, as a Darce enthusiast, I hate to admit that they all work.

The Issues With Defending the Darce Choke

The Darce choke is a move that works like a charm because it is based on a fundamental submission principle – the triangle choke. What that means is that the Darce is pretty much an arm triangle. The only difference between it and the regular arm triangle is the way you entangle your arms. For the Darce, your arms go the other way around, and you set it up from the front headlock, for the most part. As such, it is an extremely powerful submission to have in your arsenal. It uses your own arm to choke you on one side, and your opposite side shoulder ton the other. Plus, the grips make it unbearably uncomfortable and extremely difficult to break out of.

Another huge reason why the Darce choke is effective ist he fact you can get it from multiple positions. One example is from the top half guard. Whenever someone tries to play the underhook half guard 9which 90% of grapples do) they open themselves wide to Darce attacks. However, that’s not all. You can also get it from the front headlock. from the turtle, from bottom side control, even when you’re in the back mount. That makes it very versatile and ultra high-percentage.

The Darce chokes present a challenge to people mostly due to its mechanics. The grips help you keep the posture broken and keep the opponent in the position until you can slowly and patiently set up the Choke. Plus when it is deep, there’s no need to squeeze – it is enough to just wait for the tap. Or, it was. Now that the Darce Killer Malachy Friedman DVD is out, the Darce will have to go through an overhaul.

Malachy Friedman is one of those people that can really turn the BJ world upside down. His ‘Heisen guard” instructional is a great example of that. However, The Darce Killer DVD is a whole different can of worms. Thre’s a very good reason why Malachy has such a great grasp on the Darce, and particularly the ways to defend it.

Malachy Friedman is a Ricardo Liborio black belt and the head BJJ coach at American top team. This lineage is exactly why Malachy is so well versed in the Darce. Back in the day, it was Milton Vieira that experimented with the Brabo choke. Training with him was Liborio, who later awarded Malachy his black belt. While it was Renzo’s Joe D’arcy that made the move popular and re-branded it, the old school principles still applied. That means Friedman was able to learn the move from someone who watched it evolve throughout the years. No wonder his defense concepts work so good!

If you’re expecting a defense instructional that covers a few defense moves and claims to work, you’\re in for a real surprise. Instead of focusing on defense moves, Malachy Friedman covers specific Darce choke defense movements. That means that you can use his system not just to prevent the Darce, but also break out of a fully locked choke. And that is not something many people can do.

The Darce Killer instructional itself has 18 different chapters. The organization is progressive, meaning you start from the beginning and then climb up the ‘what if” ladder. For starters, you get to learn the Darce chokes, with all its glorious mechanics. Only then foes Malachy move into the gist of the DVD – defending and getting out. To that extent, he has several sections. First up are the initial movements and the order in which they work. Next, Friedmans cover different escapes, labeled with letters for easy learning. The final portion covers escaping from specific positions, giving the DVD a much wider range than expected.

This is where Malachy Friedman shares the most important concepts of his Darce escape system. The Darce Killer is based on several key movements. First up is the sit, something you need to do early so that you maximize the chances of success. The swing comes next, ensuring you break out. However, if you still run into resistance, you get to pull out “the big guns”. IN Friedman’s case those are the Chop and the Flip. If you follow through all the steps above you’ll break out of any fully locked Darce in the world.

IN case you need even more options, the Tripod walk, tripod sit and air sit-out are also there to help you get out of more creative situations.

Escaping the Darce against some of the world’s best submission artists is going to be much different than getting out of it in the gym. The reason why The Darce Killer si such a grat DVD is that it works at every possible level. And much of that success is down to the organization of the instructional.

The scapes Malachy Friedman shares work by utilizing one, several or all of the basic defense movements above. That said, once you defend the Darce, you do need to get out of it as well.  This is where Malachy system of escapes comes in. He has them organized into four different sections. The first is the guard escape, which also happens to be the easiest. Following suits are escapes A to C, all of which work against progressively more difficult positions.

Finally, Malachy goes over several different escapes from common BJ positions. OPut of some of them, your opponents can also hunt for Darces, so you get double the work done with just one move. Positions that feature in this portion are the Mount, back and Front headlock. What is truly great, and unique is that Friedman offers defenses to the submissions that ie into chains with the Darce. That means you’ll get bonus defenses to guillotine and Anaconda chokes before Malachy does an outro to wrap it up.

Not many high-percentage submissions in Brazilian Jiu-Jitsu get adequate defensive systems in response. That is exactly why they work so well. Уnfortunately, mostly for me, The Darce Killer DVD comes as the perfect solution to this popular choke. Malachy Freidman made the most out of his opportunity to learn the Darce from Liborio. However, instead of focusing on the offensive, he made leaps and bound in the defensive aspect of the Darce.